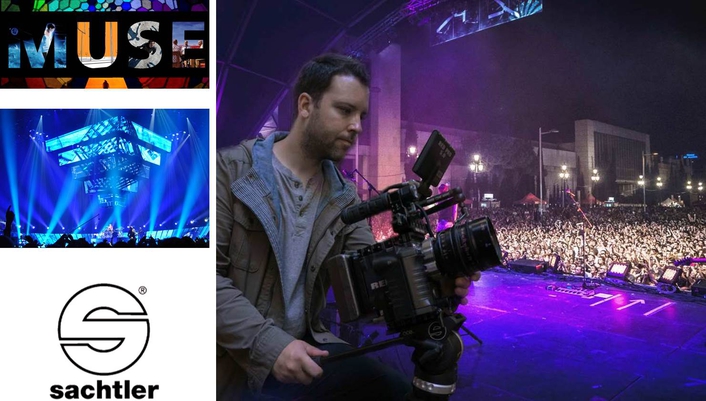 His Sachtler Ace M tripod system gives Matt Hayslett maximum flexibility and mobility for shooting his backstage documentary
For alternative rock band MUSE’s 2nd Law World Tour, cinematographer Matt Hayslett needed to choose his equipment carefully in order to keep up with fast-paced life on the road. The Grammy-winning group, which has played for packed houses in its native England and throughout Europe, is currently touring North America.

Some of MUSE’s most recent hits include “Survival,” the theme song for the London Summer Games, and “Madness,” the theme song for TBS/TNT’s March Madness, for which the group broke the record for Billboard’s longest #1 alternative airplay song. For its latest endeavor, MUSE selected Hayslett to film a documentary about life on tour.

“The band really wanted to invite fans behind the scenes for the first time, at the height of their career,” Hayslett explains. “Since I’d shot the trailer and video material for their album release, with the blessing of Warner Bros. Records, they brought me in to do just that. For the world tour, I needed a tripod that could support a wide range of camera rigs and be able to keep up with our busy schedule.

The Sachtler Ace M fluid head and tripod fit the bill,” he says. Sachtler is part of Vitec Videocom, a Vitec Group company. In addition to capturing the behind-the-scenes footage, Hayslett shot the live visuals that the audience watches at the show. “There is nothing like seeing your videos on the big screen with an amazing performance and incredible lighting,” he comments.

In order to fulfill these multiple tasks, Hayslett became a one-man-band, carrying his own gear. This meant that both weight and size were a real issue. “One of the things that intrigued me about the Ace M was the fact that it was compact, lightweight and had a true fluid head,” he says. “It is the perfect size without losing the benefits of higher end tripods. I’m able to easily carry the tripod with the camera still attached from the stage into to the crowd, to backstage, and onto the bus.

Top Performance for impressive concert takes
“The true fluid head gives me perfect camera movement without the jerkiness of the traditional lower end tripods,” he adds. “Because my camera setup changes constantly, from the Canon EOS-5D, to the RED Epic, to the Sony PMW-F3 and the Canon EOS-C300, I needed a tripod that could support this wide range and weight. Every rig that I have used has worked with the Ace, without any loss of performance. The range of counterbalance and drag adjustments makes the Ace M a no-brainer for this project.”

Deep insight for real fans
Besides filming the band’s performances, there were also occasions when Hayslett went with the MUSE musicians on personal excursions, like car racing and sightseeing, “Being compact, the Ace M made it easy to move from location to location without being slowed down by bulk,” he says. 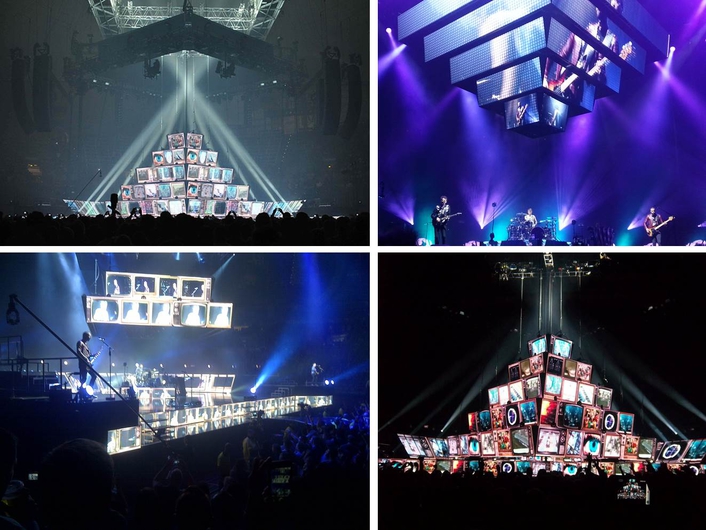 Prior to the tour, Hayslett had never used the Ace. “I typically shoot more studio-oriented projects, so I’ve always used the Sachtler Video 20 II. But when I saw the Ace M, it became a perfect match for this gig. I’ve used other lightweight tripods in the past and was always displeased by the performance — there were always trade-offs. Luckily, not with the Ace M! Knowing I have a tripod that can get the job done puts my mind at ease. That’s extremely important when you are trying to get shots that are in the moment and not repeatable.”

Matt Hayslett has worked as a DP on music videos, commercials, concert visuals and live shows. He is currently on tour through the United States with MUSE, which has proven to be a bona fide success. When Hayslett completes this feature film documentary, the band plans to enter it in various film festivals, and it will be available for broadcast early next year.

The Closest You Can Get To Real Life Now Is Live
United Records Muse Conce...rt with 4K Cinema Cameras
XL Video Continues with C...ckage for Muse World Tour