Bennett, of Seven Design Works, has used the MagicBlade™-R units to delineate thirteen jointed truss ‘arms’, which are suspended in a ‘V’ shape above the stage to form a pivotal feature of the stage design. The MagicBlade-R fixtures are rigged in double rows along the arms, which split along the centre line and move independently on a series of separate wire winches to shape and sculpt the stage from above.

"I didn’t know the band well but knew their music. I wanted to give them something very different from the video-heavy designs of their past tours - and create something that I haven’t done before!” says Bennett. “I like transparency, reflection and mirrors right now so I created a ‘fishbowl’ from a transparent stage and other elements based on the album artwork’s V symbol.”

Bennett devised a set composed of an under-lit PLEXIGLAS stage, an upstage wall of stepped, PLEXIGLAS panels which can be filled with smoke, and a ceiling of moveable arms etched out by the MagicBlade-R fixtures. “This gives the stage a volumetric feel below the band as if they are standing on another world, a backdrop that can be back-projected onto and a ceiling that I can use to change the look, feel, and shape of the stage throughout the show. My intention was to create a modern, clean look that was flexible enough to give multiple looks within the personality of the design,” he explains.

Bennett uses the MagicBlade-R fixtures both as sources of illumination and as tools to construct sculptural, architectural effects. “I’m able use the MagicBlades to accentuate the image of the ‘V’ and create a forced perspective in both horizontal and vertical planes. I can gear everything to an apex - in the air, on the ground and upstage - and use them as a mirror image of each other. At one point I even bring them in low and flat to compress the stage and top light the band.

“Occasionally we run content through the MagicBlades along with the other lighting elements on stage but most of it is pre-programmed to take advantage of the MagicBlades’ flexibility. There’s a great flexibility in what you can do with Ayrton lights because of the individually addressable LED emitters which add great simulation and texture.” 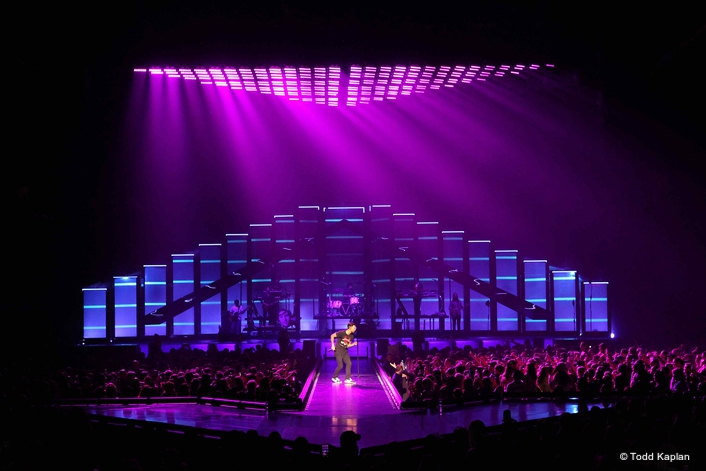 Jason Baeri, Bennett’s lighting programmer for the V tour, agrees: “It’s not just the flat beams of light that make the MagicBlades so unique, but the appearance of the face of fixture which we can use to construct scenic looks. We can create defined spaces, like the outline of a triangle, then completely transform the look for the next song in an instant. We use the continuous pan and tilt, for example, to animate the effects and make dynamic use of the space: to see 40-foot wings of light descend over the audience with the MagicBlades spinning over their heads is incredible and truly unique! I couldn’t have foreseen the kind of effects we have been able to create with the MagicBlades in Roy’s design.”

Ayrton’s MagicBlade-R is immediately identifiable as having seven 4.5° 15W RGBW LED emitters arranged inline, each of which can be individually controlled for greater design possibilities. “We didn’t make use of MagicBlade’s on-board macros because everything we did was engineered to create specific architectural space,” says Baeri. “But programming them is as easy or as complex as you want it to be. You can get some amazing looks with the ‘blade’ effect alone, which is very easy to do. But neither is it difficult to program the individual emitters independently. We did this using an MA2 console and, for the very intricate stuff, we used a Hippotizer media server to pixel-map complex shapes and direct video.”

“Everything the MagicBlades are capable of doing, I have them doing on this show,” says Bennett. “I love to work that way – I put lights through their paces and push them to the max. I like to find out where their breaking point is…and the stop just short of it!”

“There’s no doubt about the durability of the MagicBlades,” confirms Baeri. “I’ve seen these and other Ayrton fixtures really take a beating on tour and not even flinch!”

Bennett, who first used Ayrton’s MagicBlade-R for the Japanese stadium tour of Big Bang Korea (the world’s biggest K-Pop band), was among the first lighting designers in the USA to use Ayrton’s award-winning MagicPanel™602. His design for Nine Inch Nails’ 2013 Tension tour employed 126 MagicPanel 602 fixtures, arranged in 3 x 3 ‘pods’ above the band. Now, for Maroon 5’s V tour, he has utilized another massive quantity of Ayrton lights with the overhead matrix of 210 MagicBlade™-R units. Bennett’s love for large numbers of Ayrton fixtures is obvious. 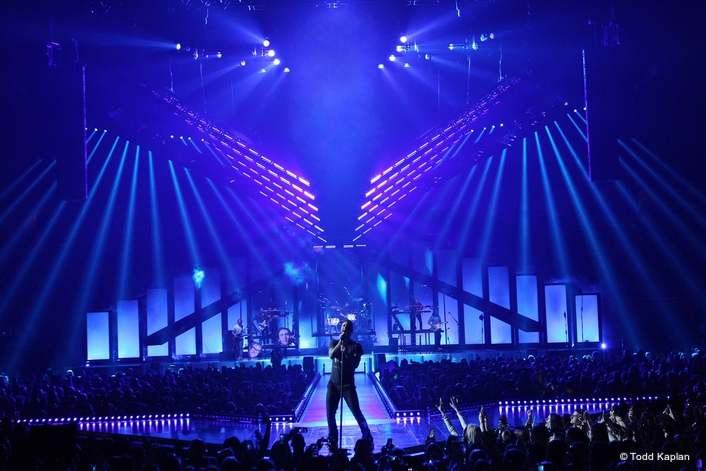 “Ayrton fixtures always work well in a mass,” he laughs. “I absolutely love Ayrton and am really impressed with their products. They are good, rock solid, bright and very dependable. They are not as ‘mechanical’ as some moving lights and they give you great flexibility in what you can do. Ayrton products bring something very unique to the market and they always come up with new tools.”

“The level of support we get from Morpheus Lights in the US is unparalleled,” concludes Baeri. “They are available to us 24-hours a day and, through them, we are in direct contact with Ayrton’s product designers who truly listen to our feedback about what we want their products to do in future.”

Maroon 5’s V tour commenced in Dallas on February 16 and concludes in Denver on December 31, by which time the tour will have crossed America, Europe, the Far East and Australasia. The lighting equipment is supplied by Upstaging, Inc. in the US and Neg Earth in Europe.

AYRTON is specialized in developing intelligent LED light products for Entertainment and Architectural applications.
Based south of Paris, France, the AYRTON Headquarters and Research & Development centre combine and organize the highest competence in engineering, software, electronics and optics, with the aim to create highly innovative fixtures.
AYRTON fixtures are created to answer any demanding installation and criteria, and are distributed through devoted and exclusive worldwide teams. AYRTON uses reliable, flexible and avant-garde technologies linked to innovative design, to provide AYRTON customers with a wide range of pioneer lighting solutions for installation in Stages, TV Studios, Show-venues and Architectural schemes.