This is the first tour for which Bennett has specified Robe's new signature BMFL Spot
US rock band Maroon 5 have begun their latest world tour in support of their chart-topping fifth studio album 'V', with lighting, visuals and stage design by Leroy Bennett.

The massive rig includes eight Robe BMFL Spot and 96 x CycFX 8 moving lights supplied by leading US rental company Upstaging, together with the rest of the lighting and rigging equipment package.

Bennett's creative starting point was that they wanted something totally different. With the distinctive 'V' of the album artwork as inspiration, the trussing and set architecture - including 19 (9 x each side, one center) eye-catching cascading Plexiglass columns upstage - was all evolved around the concept of conventional and inverted Vs. 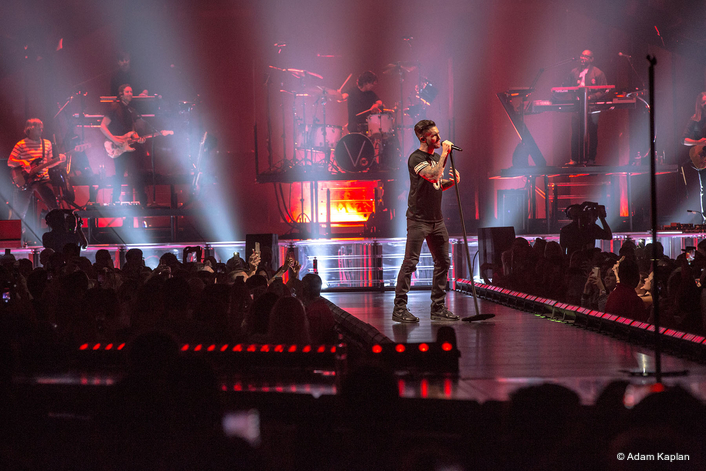 Bennett's objective was also to present a set structure that made a strong statement in its own right, and that could be changed by being lit and textured with video sources, providing a dynamic and constantly changing environment for the performance.

It includes a B-stage and a connecting walkway allowing the band to perform among their fans. The video content is rear projected onto the Plexiglass panels, which can be filled with smoke, and is abstract and provocative rather than hi def. and literal. The panels also move to bring yet another set of variations to this innovative visual equation.

The ceiling structure comprises a giant lighting feature made of 12 jointed arms rigged with lighting fixtures, all of which move on a series of wire winches, an engineering masterpiece devised by TAIT and Upstaging. It brings dynamic animation to the entire space and helps change its look, feel and shape throughout the show. 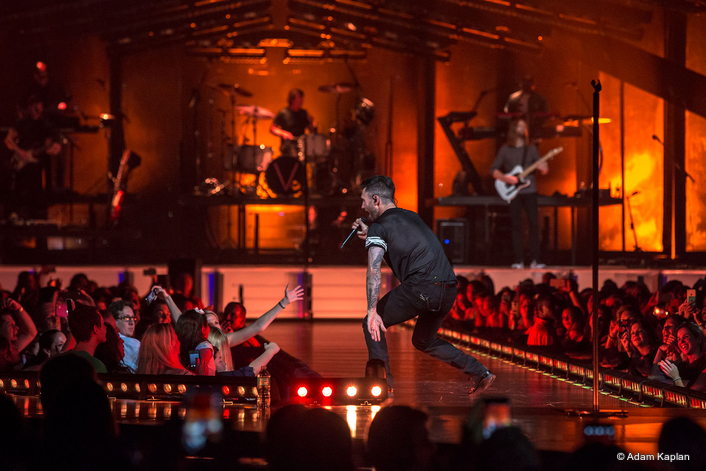 This is the first tour for which Bennett has specified Robe's new signature BMFL Spot, and Upstaging purchased the 8 fixtures from Robe Lighting Inc. for the tour.

They are positioned on the downstage truss and primarily used for key-lighting the band and for some specials.

Bennett first saw Robe's BMFL at a special preview in Australia last year, just prior to the product's launch. He was "very impressed" with the brightness and versatility.

He likes to have the choice of different light sources available on all his designs, however as this is a brand new product, he talked in-depth to Upstaging about the BMFLs during the design process as they had to make the purchase. "I would never expect any company to buy a product that I or they don't fully believe in ... as it's a big financial commitment," he explains, "But we all agreed that the BMFL was a solid investment."

The BMFLs, CycFX 8s and other fixtures on the rig are programed and run via a grandMA 2 console which is being operated on the road by Lighting Director & Programmer Brian Jenkins.

It's the first time that Brian has used BMFLs, having first seen them in action on the 2014 Teen Choice Awards. "They are "doing a fantastic job" in key lighting the band,” he comments adding that that the colour-space is excellent and the lightsource is even edge-to-edge, with no hot-spots. 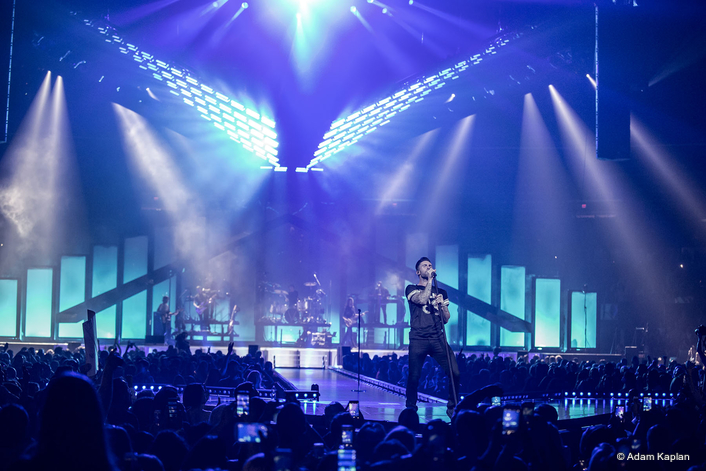 "We're all struck with how bright and snappy the lights are, but they’re perfectly capable of being subtle and smooth as well," he states, and he specifically likes the BMFL's animation wheels and the zoom range.

The 96 x CycFX 8s were another new purchase by Upstaging. They are outlining the L-shaped thrust running between the Main and B stages and are also positioned around the perimeter of the B-stage.

Bennett knew the effect he wanted and it was Upstaging Director John Huddleston who initially recommended he look at the CycFX 8 as he had been conducting extensive research into the options.

TAIT made custom brackets for the CycFX 8s allowing the units to hang off the edges of the runway and the B stage, and once mounted in these, the units mate-up seamlessly and can be used as one integrated fixture. 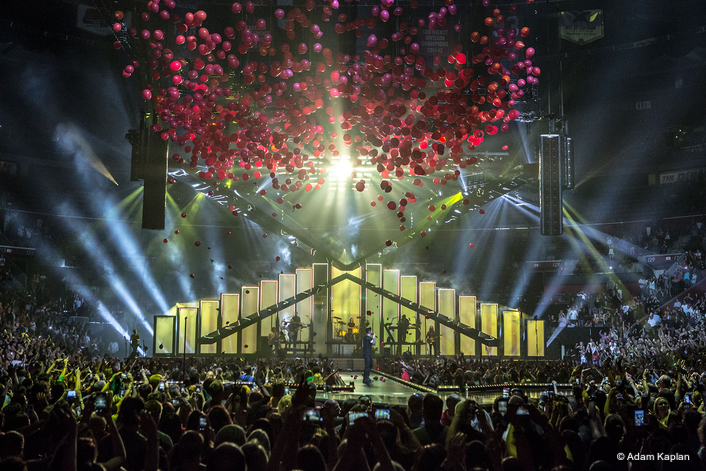 Mapping the eight 15W RGBW LED pixels in each CycFX batten individually has enabled the creation of a series of fun and funky pixel bumps  and chases that run  throughout the show  as well as their base task of defining the edges of the runway and B stage and for occasional up-lighting.