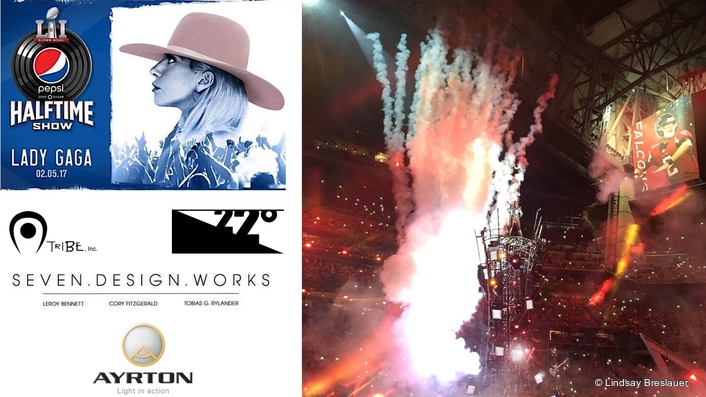 On 5 February Houston, Texas played host to the NFL’s Super Bowl LI, fought out between the New England Patriots and the Atlanta Falcons at NRG Stadium. Entertaining the crowds in the hotly anticipated Pepsi Zero Sugar Halftime Show was Lady Gaga, whose high-octane performance earned the respect of millions in an intense 13-minute spectacular that was viewed by over 115 million people worldwide. The show was another world-class collaboration from co-production designers, Bruce Rodgers of Tribe Inc. and LeRoy Bennett of Seven Design Works, and lighting designer, Bob Barnhart of 22 Degrees.

Ayrton was, once again, proud to be part of this show with 81 new MagicDot™-XT fixtures, 40 new MagicPanel™-FX fixtures and a solitary CosmoPix™-R chosen to adorn the major scenic elements of Barnhart’s lighting design.

Both Bennett and Rodgers had a message to convey through their design and, with the eyes of the world watching, helped Lady Gaga restore a sense of unity and deliver a performance that was both uplifting and determined.

Symbolism was abundant amongst the scenic elements, with half-buried – but still shining - stars surrounding the main stage, two tall 34ft-high towers as back drops, and a piano stage shaped like a planet of shining light, with a beating heart at its centre and softly undulating beams of light reaching out to the audience. With the juxtaposition of Woody Guthrie’s This Land is Your Land and Irving Berlin’s God Bless America at the top of the show, against a backdrop of illuminated drones etching out the star-spangled banner in the sky, the message of humanity was clear to any who wished to see it.

“We presented the design to Gaga, who has very strong views of her own, and she embraced it,” says Bennett. “She is one of the few artists who, once you show them an idea, figures it out and then totally owns it.” From this, Gaga decided on her own set list and what to do with each number in different areas of the stage, then worked hard to make sure every aspect of her performance was perfect, from her dive off the roof of the stadium, 90ft up in the air, to the final catch of the ball as she jumped off stage at the end. “She worked so hard and we wanted to ensure our design matched her level of commitment. She’s the real deal as far as talent goes. She is a great entertainer but most of all, an incredible human being – honest, open, warm and sincere, and we wanted to bring that across too.” 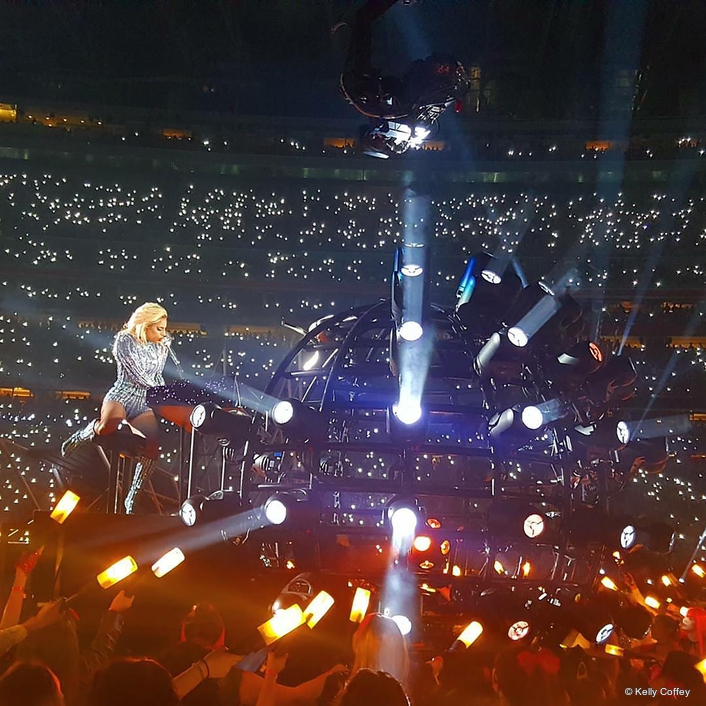 Bennett chose not to use video in the show in favour of something different that would focus the attention on Gaga’s performance. “I wanted something more raw, to say something about Gaga. So Bruce and I came up with the same inspirational tear-sheet – a chequerboard stage with its grid work illuminated from beneath and emanating smoke to add another dimension to what would be traditionally a flat surface.” Flanked by the fallen stars, the stage was backed by two tall towers which provided scenic lighting as well as being a statement in themselves appearing, at one point, to be on fire. Each tower was rigged with 20 of Ayrton’s new MagicPanel™-FX, and additional spot fixtures, placed on the façade in a random layout to help with the look of the over all production design. MagicPanel-FX units were also located in the base of the towers and used to up-light the towers themselves.

“I like the MagicPanel-FX because of their brightness and zoom capabilities,” says Barnhart. “I also wanted a contrast to the spot fixture that would share the same real estate. The contrast in the appearance of the MagicPanel-FX, as well as what it can do, gave me a nice tool box of options.”

Aside from the beam capabilities and movement, Barnhart made use of the MagicPanel-FX’s internal macros to create graphics that played across the face of the fixture, offering great timesaving during programming in the short production time available.

Barnhart chose another new Ayrton product, MagicDot™-XT, to create a second scenic piece, an outlandish piano feature – one of Lady Gaga’s signatures - which in this case took the shape of a globe. “The idea came from Gaga herself who wanted a sphere that represented the planet, with a multitude of light beams emitting outward from it,” explains Rodgers. “We designed the shape as a series of custom-bent latitudinal and longitudinal pipes clustered with an array of MagicDot-XT fixtures specified by Bob. This shape melds into a grand staircase and the entire combination was mounted on a wheeled cart frame to roll it onto the field.” The globe, like the towers, was fabricated by All Access Staging & Production.

With Gaga’s keyboard connected to the globe, Barnhart programmed a series of gentle fades and ripples of light through the MagicDot-XT fixtures, combined with slow sweeping movements to create a whole emotive environment during the song A Million Reasons. A single, spherical, Ayrton CosmoPix-R was placed in the centre of the piano globe as the warm beating heart within it, giving another dimension and depth to the structure and meaning. 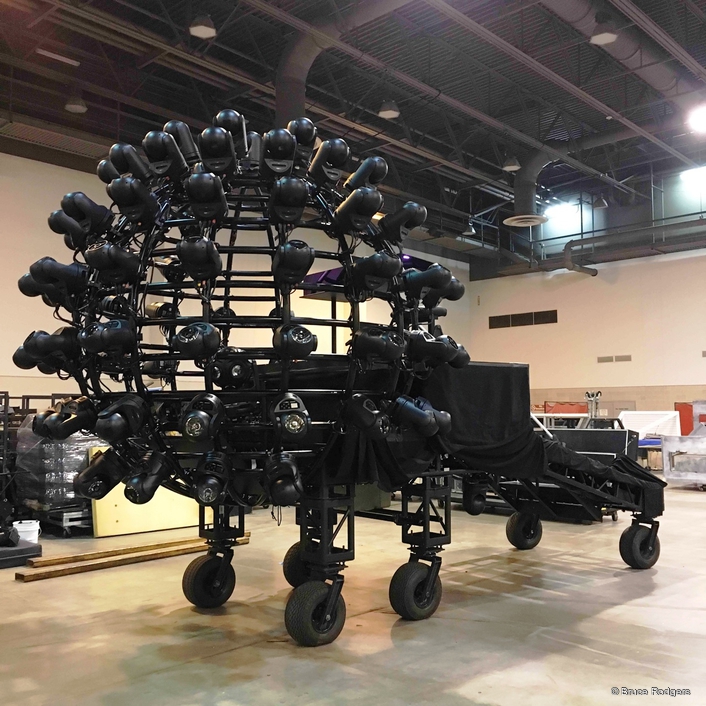 “Instead of the piano just being an inanimate object, it took on a personality of its own with some emotion attached to it that emanated out into the audience,” says Bennett, who also praised the field cast of choreographed Gaga fans that carried Glow Motion torches across the field to connect with the crowd. “It was the closest you can get to video, but without the coldness that can come with LED as a medium. The whole idea was about bringing in a more humanistic, organic side and bringing it down to earth.”

Ayrton’s new fixtures were brought to Bennett’s attention by Morpheus Lights, the exclusive US distributor for Ayrton, which brought a private demo of the MagicDot-XT and MagicPanel-FX to Bennett in early November. He immediately earmarked them for Lady Gaga’s Halftime Show, and demo units were delivered to Barnhart and the scenic team some weeks later. After seeing their capabilities, Barnhart chose MagicPanel-FX and the MagicDot-XT specifically for the scenic pieces of the towers and piano globe. They were supplied by PRG, the long-term lighting contractor for the event.

“I love Ayrton products: they are extremely innovative, super-reliable, and always at the top of the list of things I put into my designs,” says Bennett. “Bob did an amazing job of putting it all together, and I’m happy to say they all behaved themselves on the night!”

The whole production was as deft and beautifully executed as Gaga’s now-legendary final catch of the ball. This team nailed it.