Astera for “Fiach” Drive in Drama in Ireland 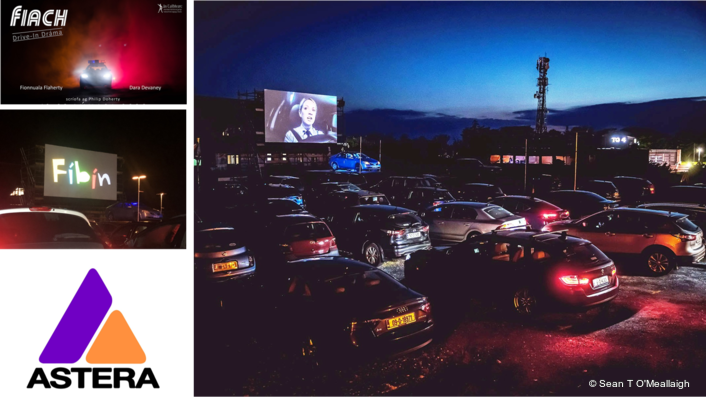 Presenting theatre and performance in the pandemic is a truly challenging space, but it’s also no surprise that our hugely talented and resourceful entertainment industry worldwide is responding with some truly imaginative and ingenious solutions for offering the public much needed opportunities for engaging with thrilling and emotional dramatic experiences! “Fiach” is a fantastic example! This unique new work by Philip Doherty unites the disciplines of theatre, cinema and comedy in a seat-edge live onstage and in-car drama, accompanied by vibrant large format video visuals, a thumping sound system, intense theatrical lighting … all in a Covid-safe drive-in viewing environment.

It is also a great example of how a kit of eight Astera Titan Tubes, used with thought and invention by lighting designer Mick Murray … can go a long way!

The ground-breaking Irish-language work was presented (with English surtitles) by Fíbín in association with An Taibhdhearc in a car park at Baile na hAbhann, Connemara, County Galway, Ireland, starring award-winning actors Fionnuala Flaherty and Dara Devaney.

Delivering a “blistering tale of love, passion and the power of the human spirit”, the adrenaline-fuelled action started when local hoodlum and drug dealer Fiach staggers out of a pub high on a mind-blowing-and-bending cocktail of acid and whisky! Getting into his car, he’s pursued at high speed by Gardaí officer, Clíona. 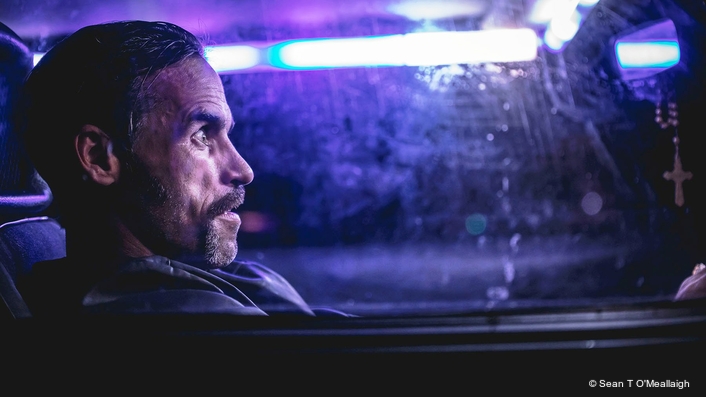 Producers Fíbín asked Mick Murray to create the lighting, video and staging designs. With an impressive array of idiosyncratic mixed media projects to his credit, Mick jumped at the chance and reached for Astera Titan Tubes – supplied by lighting rental and installations specialist Cue One – as a practical, powerful and aesthetically pleasing lighting solution.

Mick and Philip (Doherty), who also directed his work, discussed numerous elements and ideas. The requirement was for a mix of cinematic and theatrical lighting techniques and treatments, and for this to work properly, the quality of light was “hugely important” stated Mick.

This was the primary reason he chose Astera products, plus their ability to add “a more dynamic feel” to the show.

As Philip really wanted to immerse the audience in the show, in the stage design Mick positioned the cars – the dealer’s Ford Capri and the policewoman’s unmarked Nissan Primera vehicle – on staging decks with the actors inside as far as possible into the audience.

Four Astera Titan Tubes were rigged in the two cars and the other four on the four ‘scenic’ streetlights complete with custom-designed 3D printed hoods. 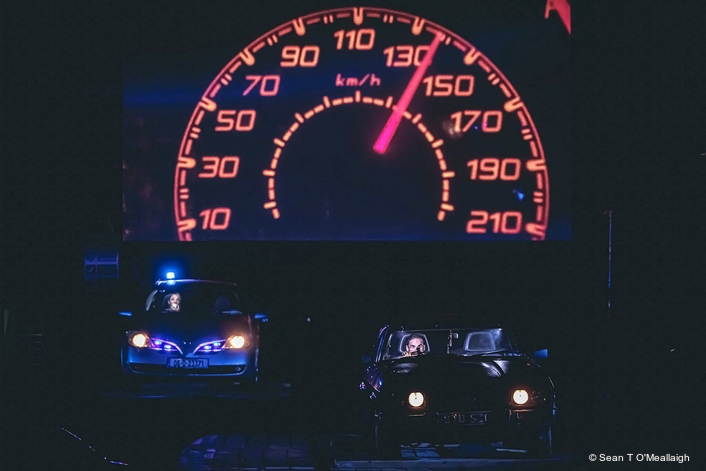 The four dynamic ‘streetlights’ completed the desired physical immersion effect extending from the edges of the car stages out through the lines of audience vehicles pulling them into the action.

Inside the two chase cars, Mick needed both key and effects lighting.

The two Titan Tubes were the main key lights, augmented with fill coming from LED strips placed on the sun visors and dashboards. In the police car, the Titans were secured either side along the top of the front doors, and in the Capri, one was in front and one on the left.

Live camera feeds from the cars were beamed up onto a billboard style projection screen behind the cars.

Much of the pre-recorded video content and close up shots – feet on accelerators, hands of steering wheels, etc., plus some additional optical trickery – was also shot on site during the rehearsal period, all coordinated and compiled by Mick and programmed onto a Smode media server.

“The Astera units were pixel mapped for effects to run over their static show states which were varied slightly in colour and intensity, always keeping the camera image looking good,” commented Mick, who was delighted with the results.

The streetlight effects threw the atmosphere and tension out in the audience / car area via slow animated pixel chases on the Titan Tubes, all helping to ramp up the energy and excitement so the audience felt they were part of the chase. 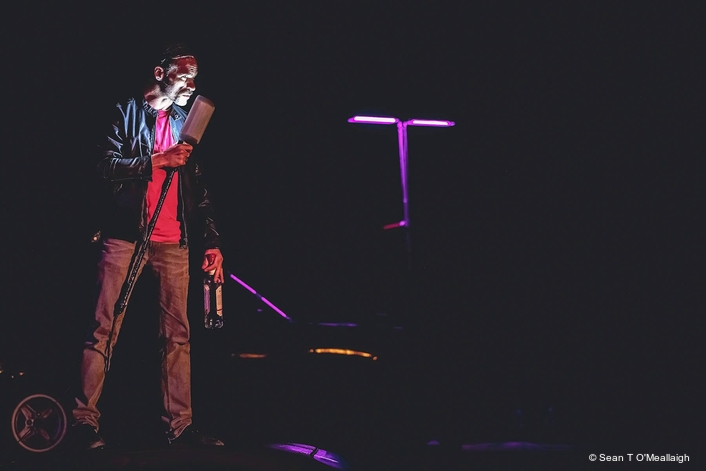 Other major lighting moments where guests needed to enjoy the narrative’s fuller visceral dramaturgy included when Fiach’s acid trip explodes in his head – to Mos-Def / Massive Attack track “I against I” – assisted by a string of psychoactive effects produced by the Astera ‘street lights’.

Mick also found a perfect sodium colour temperature look for the Titans to match the street nearby for the drive-in state as people arrived.

The printed sleeve of the streetlight hood fitted over and protected the centre of the Titan Tube and slid into a T-shaped key-clamp fitting mounted on top of 4 metre high lighting booms. The hood also incorporated the mounting hardware supplied with the 8-way Titan Tube kits – a hole in the end of each hood accepted the M5 rigging eyelet and a slot / holes enabled the aluminium mounting clip to be screwed to two parts of the hood and attached to the Tube.

All eight Titan Tubes were run powered, via thin DC cables back to the Titan charger located in the boots of the cars, and were programmed, together with the other lights, via an ETC Ion lighting console by Ritchie Lambert who was working as Mick’s assistant LD. The car headlights were also DMX controlled and run through the lighting desk for the performance.

At the end of the show, the audience replaced clapping with flashing headlights and honking horns – all in unison, proving that atmosphere can form between a socially distant / separated audience even when self-contained in their own car ‘bubbles’! 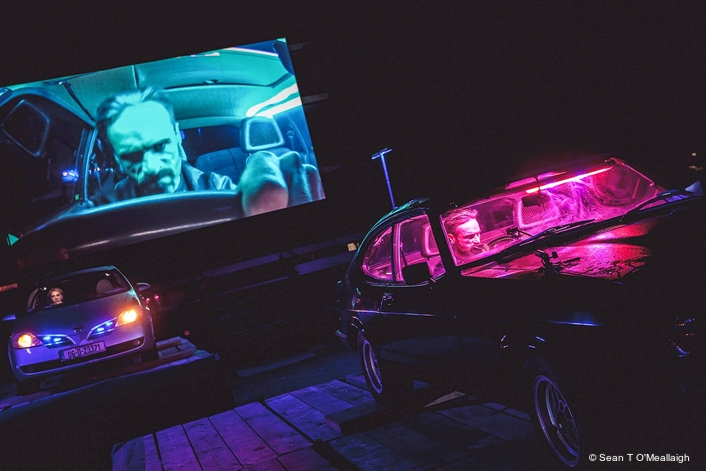 The production was a highly rewarding experience in which to be involved elucidated Mick who lives in Slovenia and had to quarantine for 14 days on arrival back in his native Ireland. The show evolved – parts of it very spontaneously – over about six weeks, four of which were spent on site ahead of the first show, building, preparing, tech’ing, rehearsing, shooting the prerecorded video parts, etc.

The performance and the production concept were a massive success.

Accommodating 45 cars at the Connemara site, each show was sold out for the two-week run, and there is now talk of touring it as a fully self-contained – technical production, set, performers, crew – innovative and highly entertaining Covid-safe drive-in drama production.