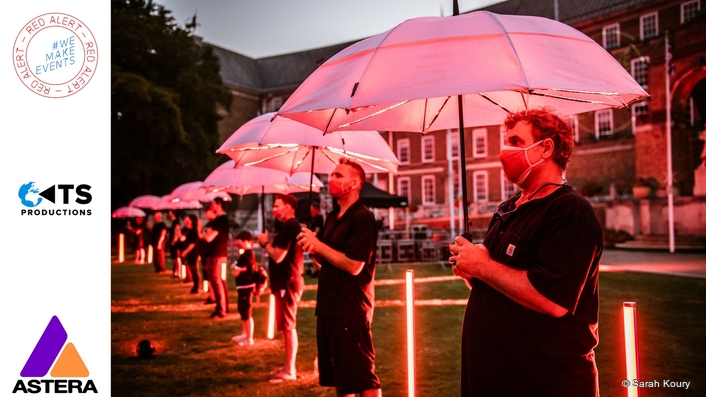 Bristol, UK-based production manager and lighting designer Tim Smith of TS Productions utilized the power and practicality of Astera wireless lighting to illuminate his “One-hundred Unseen” an innovative high-impact live art installation created as part of a UK nationwide campaign day on August 11th 2020 to the highlight the critical state of the live entertainment industry amidst the Coronavirus pandemic. Shows and events came to an abrupt halt in March, stranding companies, venues, organisations and a large community of freelance creatives and technicians without any income, with precious little government financial assistance, and currently, no roadmap to reopening.

“One-hundred Unseen” featured 100 event professionals invited to take part in the art action – dressed in stage blacks with red masks arranged in a socially distanced formation on College Green, one of the most prominent locations in Bristol right in front of the chambers of Bristol City Council.

The highly symbolic piece represented the unseen nature of technicians working in all disciplines of productions, shows and events. 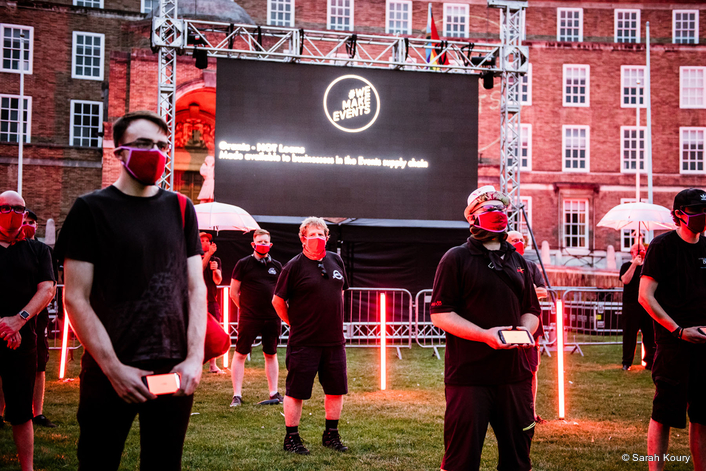 Tim asked lighting designer Chris Bushell to devise a lighting scheme – highly mobile and deployable at short notice – to illuminate the One-Hundred in ‘emergency red’ denoting the state of the industry for 10 minutes during ‘the blue hour’ of the evening.

An LED Screen installed at the back of the One-Hundred displayed facts and statistics related to the live entertainment industry and the huge revenue it brings into the UK exchequer, while the people were lit in red by 38 x Astera Titan Tubes around the back and sides.

Twelve Astera AX5s TriplePARs - on the ground at the back - fired through people’s legs. 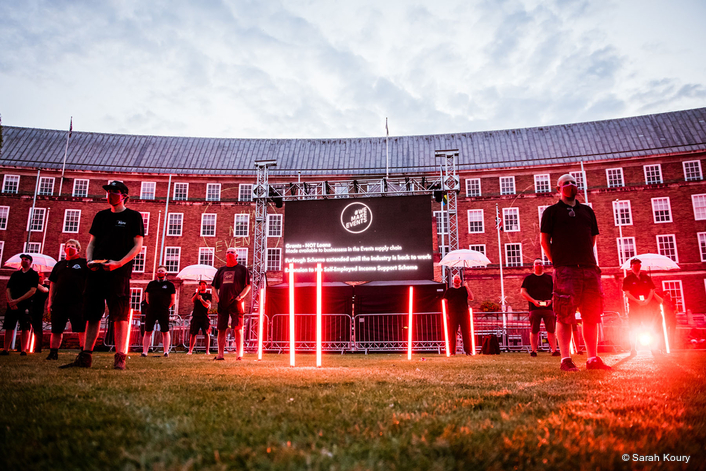 The lighting included a few other fixtures and covered an area of around 70 metres wide by 15 deep and was instrumental to Tim’s narrative, for which a bright, high quality, lightweight, easily positioned lighting solution was the only solution.

Tim was delighted with the results. “Creating a large and spontaneous piece of human art like this was challenging but it really became a talking point! The lighting was a final touch that helped make it stand out, and the quality of the Astera’s light is fantastic, the fixtures looked very cool and Chris did an amazing job!” he concluded.

“Appearing from nowhere and emerging from the shadows to have their collective voice heard,” explained Tim, “the piece expressed a whole array of emotions and personal scenarios. The One-Hundred represent a tiny percentage of the 200,000 plus event staff in the UK who urgently need assistance to get through the crisis.”

The Asteras for “One-hundred Unseen” were supplied by Utopium and SLX, two locally based rental and technical production companies who joined forces with several others and worked together for the day of action, reflecting the general mood of unity permeating the industry right now.

The Bristol actions were part of the larger #WeMakeEvents ‘Red Alert’ event spearheaded by PLASA (The Professional Lighting & Sound Association) ... which included direct action activities on the same day in 17 major cities around the UK as well as over 700 buildings up and down the country that were lit in red by the #LightItInRed movement – also formed as a grassroots consciousness-raising response to the current situation. 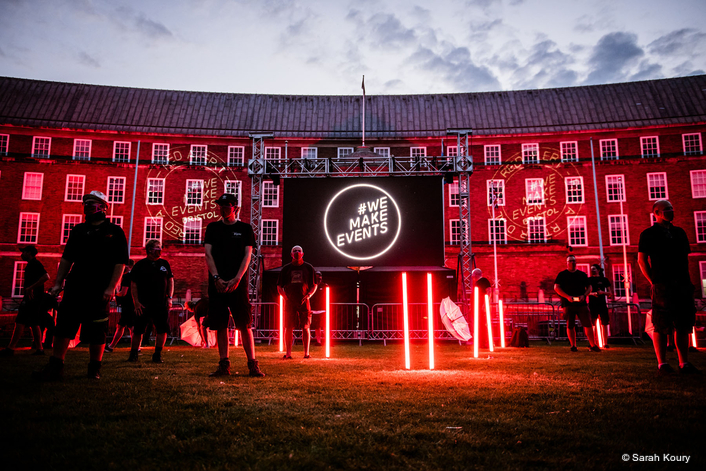 All of them underlined the importance of Bristol – with its culture and history richly invested in music, events and the performing arts and numerous brilliant event-based businesses with highly talented employees and freelancers – participating in the national #WeMakeEvents campaign.