Adlib Supplies Beautiful Combination of Production for The Wombats 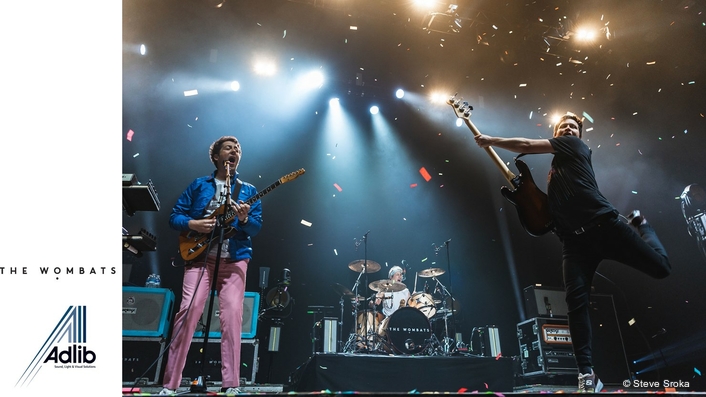 Confetti Time with a Flying Wombat!

Adlib supplied sound, lighting and video to the recent tour by Liverpool indie rockers The Wombats … very proud to be supporting homegrown talent with a stunning production.

Tour manager Simon Fuller used to work for Adlib a few years ago and knows many of the staff and crew. “Their way of working is excellent, and I always like to try and rent kit from Adlib when possible, fully confident that we will be well looked after”.

Adlib was the sole production supplier for the previous Wombats UK tour back in March 2018, and the set up was similar this time around, so it made sense to keep the continuity. 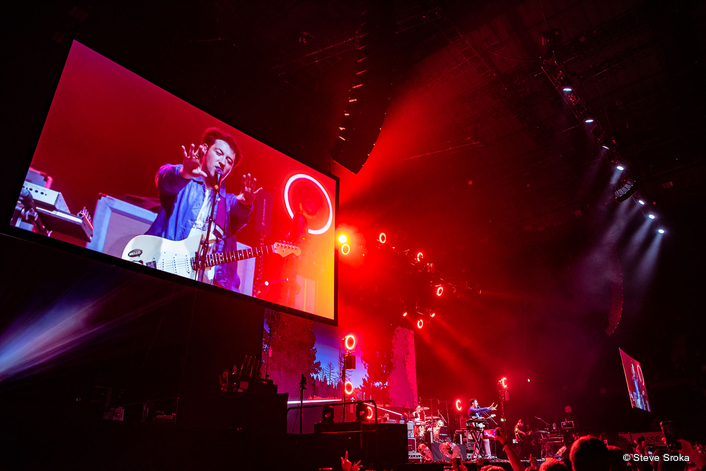 Video and Lighting
Adlib’s Rob Bickerstaff looked after these two visual departments for The Wombats lighting and video designer Dave Jackson from Creative Productions and was also out on the road with them this time and during the 2018 tour. 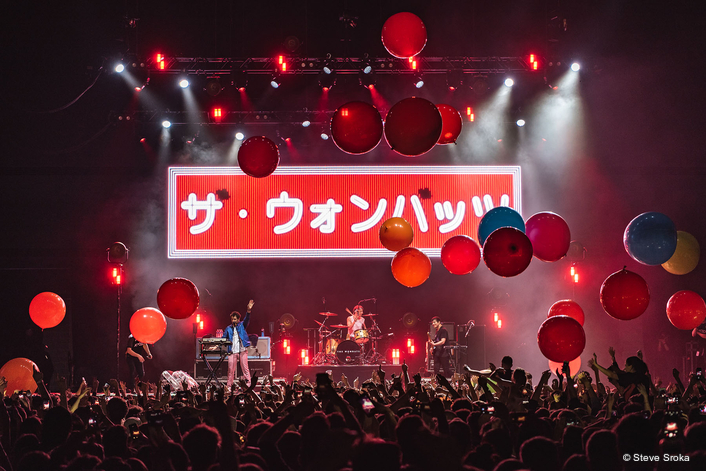 At the heart of the visual design were eight ALX JW-1 lighting fixtures, a proprietary retro styled LED dish luminaire, which looked great and offered a lot of inbuilt LED effects in addition to the general illumination. These were dotted all around the stage on a series of different height floor bases, together with eight GLP JDC1 LED strobes. There were also eight Robe Spikies – small continuous rotation LED beam lights – which were positioned down each side of the stage and used for cross washes and funky gobo effects. 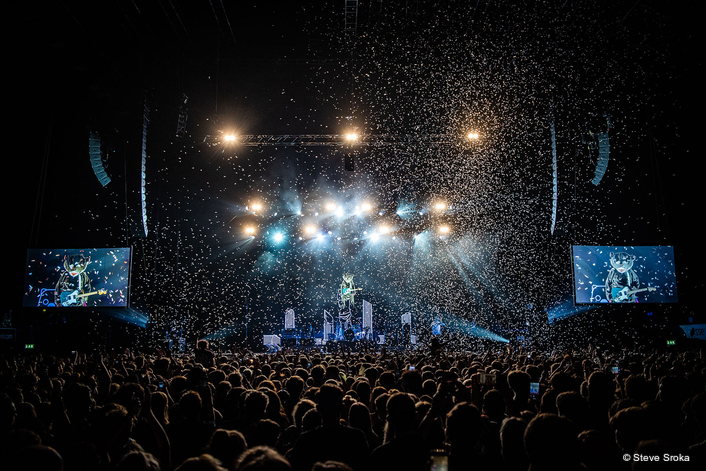 They hooked into the ‘house’ rigs of each of the academy style venues.
Dave ran all lighting and video (via an ArKaos media server) from a grandMA3 console.
For the two Arena shows - The SSE Arena, Wembley and Leeds - Adlib supplemented the touring rig with a lot of extra lighting including three trusses.

These were loaded with 24 Martin MAC Aura XBs, equally divided between the front mid and rear trusses, together with a total of fourteen MAC Viper profiles, six on the mid and eight on the back truss. 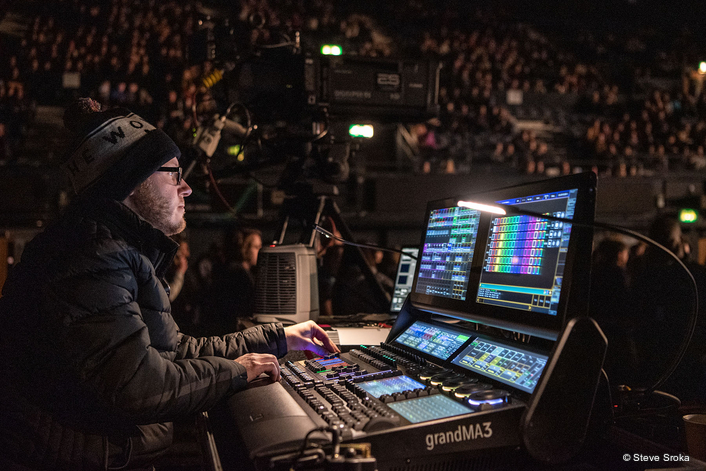 Another seven JDC1 strobes were added - four to the mid truss and three to the back, plus 11 Elation QPix 2-cell LED blinders, three on the front, and four each on the mid and back trusses.
The touring floor package was set up as usual, and the JW-1 fixtures were boosted with another eight, giving an eye-catching scenic element to the stage.

Joining Rob as additional Adlib lighting crew for Wembley were James Betts-Grey and Stu Gray.
The video was also expanded for the Arena shows; the upstage screen was enlarged to a 10-metre-wide by 6-metre-high surface made up from the same Unilumin 5 mm LED. This was supported with two side 16ft by 9ft Stumpfl IMAG projection screens, fed by four Panasonic 21K laser projectors run as two doubled up pairs. 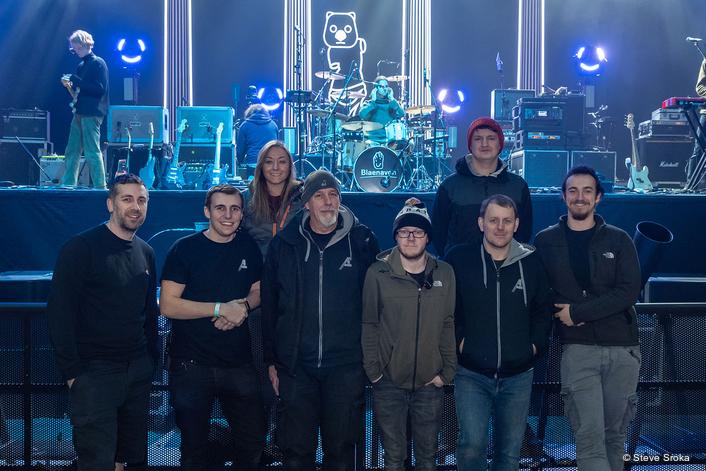 Three cameras were supplied as part of the arena video package, one Sony HXC-100 located at FOH and two Panasonic PTZ - AW-EU70KE pan-tilt-zoom cameras onstage which were mixed by Iain Christie using a Panasonic HS410 vision mixer.
Jon Priest operated the robo-cams and Bruce Selkirk looked after the projection and operated the FOH camera.

“Everything was very smooth and straightforward” reports Rob. “It was great to be working with Dave and all of the crew again, they are a great bunch of people to be around and it’s a well-oiled operation. Being familiar with the set up from last year’s tour … was also really helpful”.

Audio
Adlib provided The Wombats with a compact control package for the full UK/EU tour, working closely with their engineers Pete Bartlett (FOH) and Andrew Egerton on monitors. This consisted of an Avid Profile at FOH with a DiGiCo SD12 at monitors with a line system / stage cabling package to suit. Adlib then supplied CODA audio racks and stacks and additional crew for the two arena shows, with the rest of the shows having already installed house systems.

Jethro Hall was the system tech for The SSE Arena, Wembley and Jay Petch had the honours in Leeds. They were joined by Billy Bryson, Sam Pearson and Laurie Binns over the 2 shows to look after the speaker system and the additional support act equipment that was also supplied by Adlib.

The system was a combination of CODA AiRAY and ViRAY, within the largest format in Leeds due to the width of the room, with main hangs of 14 x AiRAY with two SC2-F low frequency extenders at the top and four ViRAY at the bottom of the hangs for down fills.

The side hangs were each 10 x AiRAY with six ViRAY downs, and there was a small centre cluster of six of the TiRAY a perfect compact speaker and in this setup ideal for covering that first 10 metres or so of the auditorium, including the mosh pit where the diehard fans tend to be!

Rumbling away sinisterly on the floor were 16 x CODA SCP subs. The front fills were four HOPS boxes, supported by three APS a-side for infill across the floor.
These were all running via CODA’s Linus14D amps with Lake LM 44s and an LM26 at FOH at FOH for front end processing.

The return system was sent over CODA’s LiNET including a dually redundant AES drive system over a pair of CAT6’s running the 8 lines of AES that is proprietary to CODA.

Using the CODA with its expedient size and big sound, Adlib managed to pack an arena’s worth of kit into a 26-ton truck so that also kept production happy. Like others, Jethro enjoys working with the system because of its compact size & weight, meaning handling and rigging it, both as a tech and for local crew, is straightforward. This makes for an easy day for all involved and it also sounds fantastic, providing superb intelligibility, clarity and SPL across the entire coverage region.

The tour was a great success, and Simon Fuller concludes enthusiastically: “Working with Adlib was top notch as ever, and I know that my touring crew have all felt the same.”