Adlib and the Electric Lady 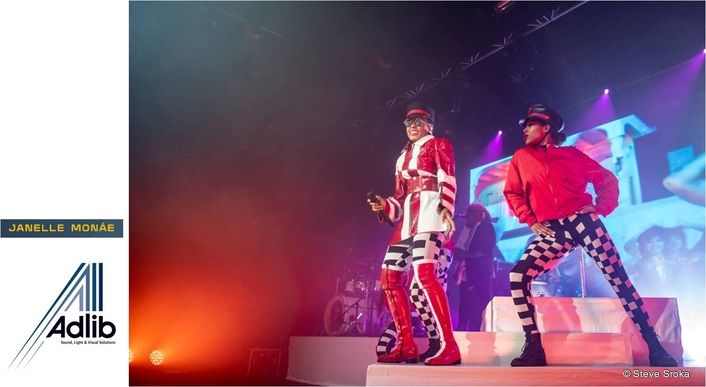 Adlib first supplied audio kit for the hugely talented and enigmatic American singer, songwriter, rapper and actress Janelle Monáe in 2008 … at that time she was a hotly tipped future star, flying high on the just released Grammy-nominated and critically acclaimed EP Metropolis: The Chase Suite.

A decade - and a myriad of cool, interesting creative projects later - Monáe’s engaging assurance, confidence, unique sound and strong message of empowerment is inspirational as well as hugely entertaining and relatable in a world of social turmoil.

Monáe was recently back in the UK and Europe for a short, high-impact leg of her “Dirty Computer” world tour, and once again Adlib was involved in supplying the technical production elements - sound, lighting and video - to her fabulous production team led by tour manager Reneeka Rae and production manager Jeff Cochran.

Adlib account handler Phil Kielty commented, “Janelle is one of the most energised and innovative artists of the moment and it was our pleasure to work with her and her crew again”.
In keeping with the spirit of inclusion, the FOH creative team was all female with sound engineer Amanda Davies, video director Erica Hayes and lighting designer Lauren Sego leading the way with this slick, classy presentation embracing the best of pop and theatre. 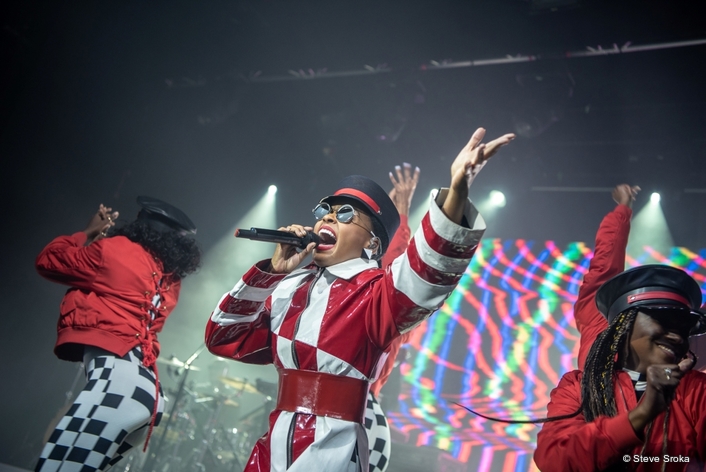 The equipment package was effectively a dry hire, however Adlib sent engineers to ensure that everything was set up and ran smoothly at the first show in Paris and supplied additional tech support for the high-profile UK shows at the Roundhouse and Manchester Academy.

Audio
The system comprised DiGiCo SD12 consoles at FOH and monitors, L-Acoustics sidefills and a custom microphone and stage package that made cable management and setup as quick and easy as possible. Everything was spec’d by Amanda (FOH) and monitor engineer Anthony Cavasin, and Adlib audio account manager Leah Coyle worked closely with both to ensure that it was tailored exactly to their needs.

For the stage mix, Adlib supplied 10-ways of Sennheiser 2000 series IEMs - inclusive of band and technical mixes, together with 8 channels of Shure UHF-R for instrument RF (guitars & horns), while Janelle’s RF system comprised a Sennheiser SKM52000 handheld fitted with a 5235 capsule. 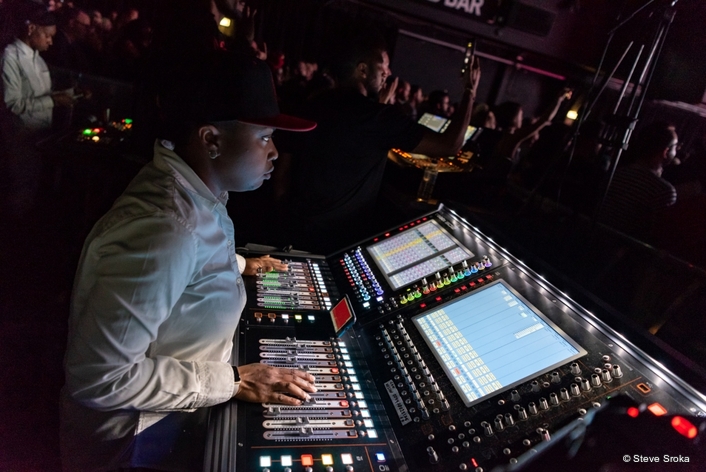 Hassane Es Siahi, one of Adlib’s most experienced engineers, was deployed on the first show in Paris to assist Amanda and Anthony in getting the control package up and running.

Video
Adlib supplied a complete LED wall system with technicians for the Manchester Academy and London shows. This was complemented by a dry-hired camera package looked after directly by video director Erica Hayes.

The system for the two UK shows was supplied based on the largest version of Monáe’s 3-screen video design, using 50 square metres of Adlib’s new Unilumin UpadIII H5 5mm indoor / outdoor product running with the new 4K NovaStar LED processing racks.
A centre screen was flanked by two slightly angled outer screens, and this format was utilised for London. For the cosier stage space at Manchester Academy, it was modified into a single screen upstage. The Unilumin was built into adaptable touring frames developed for quick assembly, and the side screens flew up in 20 minutes once the points were in place! 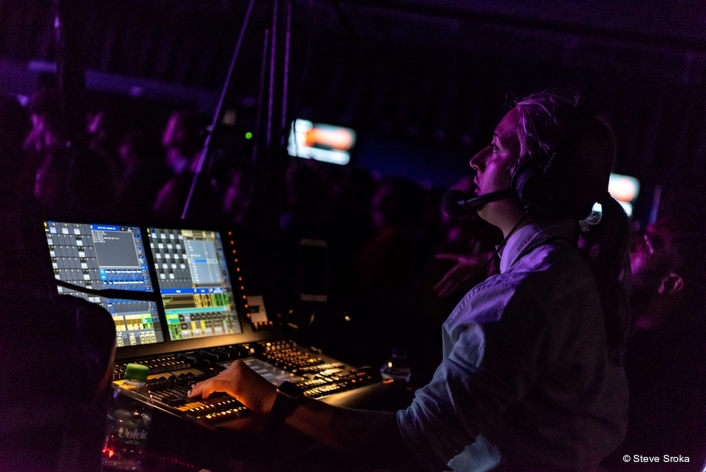 Monáe’s production brought their own media servers running Resolume, and Adlib augmented the system with a Barco S3 processor for screen management.
The design was flexible and dynamic, working equally well in the different configurations; the content was excellent in quality and looked fabulous on the screen.

When running the three-screen design, IMAG footage appeared on the two sides surfaces with an action-packed camera mix cut by Erica, which contrasted with playback and effects going onto the centre screen.
“The whole production team were very enthusiastic and great to work with” commented Joe Pointing, Adlib’s video account handler, adding that the UK shows, with the full production package, “looked brilliant”.

Lighting
Tom Webber travelled to the first show in Paris for Adlib to ensure everything was in order, after which LD Lauren tech’d everything herself.
Lauren already had a floor package design which Adlib had quoted and supplied, making it as compact and straightforward to rig as possible. Everything was thought-through, thoroughly prepped, pre-addressed and patched, and the ArtNet and fibre network systems were all established in advance so everything could be rolled out of the truck and be ready to go. 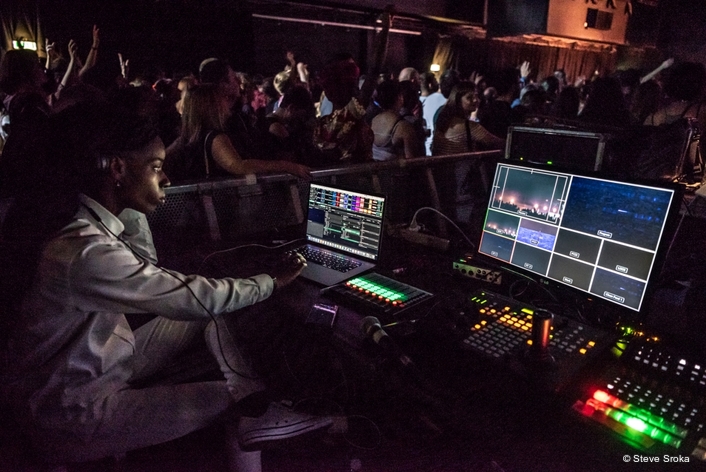 They toured risers and a set which included a spectacular raised three tier pyramid in the centre, that broke up the uniformity of the stage and brought depth and dimension to the space.
It was a big back and side lighting rig consisting of six Claypaky Mythos, three GLP impression X4 Bar 20s, 16 x Martin Mac Aura XB LED washes together with two ZR 44 smoke machines and two hazers, all controlled via a grandMA2 light console, complete with all the necessary cables, data and power distribution.

Two follow spots were added for the London shows, taking advantage of an extras truck already destined for the gig from the Adlib warehouse in Liverpool.
It was a simple rig, but the show was busy and animated, from the costumes to the colours, with lighting and video helping build an air of visual extravaganza around Monáe’s incredible presence right at the centre of it all.

Adlib account handler Phil Kielty commented, “The show was classy with a very stylish presentation, but it had serious attitude as well. It looked incredible and sounded fantastic. We look forward to working with their lovely production team again very soon.”
Jeff Cochran, Production Manager stated that “Adlib provided excellent service, quality gear, expert technicians and a friendly, interpersonal touch to the experience of hiring audio, lighting and video systems.”

5SOS Sound Good & Feel Good with Adlib
Adlib Brings the Horizon and More
Adlib Can’t Believe What They Did for …. Emeli Sandé