Adlib’s remarkable working relationship with the touring version of multi award-winning mega-successful sitcom Mrs Brown’s Boys hits the 15 year mark this year, with the Liverpool based company providing full technical production – sound, lighting and video -  for the various legs of the 2015 arena tour, scheduled to conclude in December, plus a live DVD shoot in September.

Adlib also made a major investment in new Absen high definition LED screen, Sony broadcast cameras and Prolyte pre-rigged trussing in time for the first leg of the tour in the spring.

LED video screen has replaced the projection systems of previous tours this year taking everything up a level, complete with 252 panels of the new 3mm Absen A3 screen.

The lighting, sound and video production were all based around the brand new 2015 set designed by Frankie & Brian.

The entire production is tailor made to suit each of the various arena venue runs on the itinerary, explained Adlib’s Technical Production Manager for the tour Kevin Byatt, who oversees all the equipment, logistics, prep, crewing, etc. This approach allows them to fine tune each performance space so it’s just right.

Adlib Video is Expanding
Adlib’s Ian Tomlinson takes up the story of the Absen investment.
Adlib had been planning for some time to add an HD product to their growing stock of medium resolution LED screen. They explored several options before Ian and Adlib’s MD Andy Dockerty finally decided on the Absen, delivered by UK distributor PSCo in time for Mrs Brown to hit the road.

With a multiplicity of LED products on the market, Absen was chosen for its light weight, practical and intuitive cabling and programming and the flexible rigging, which includes a straightforward ground-supported option … in addition to being flown.

“The build quality is excellent and it’s a great all-round choice for us and the variety of work that Adlib undertakes,” confirmed Ian.

On Mrs Brown, the left and right IMAG screens each measure 6.5 metres wide by 4 metres high and the delay screen – located at the back of the FOH riser for the convenience of those seated towards the rear of the venues – is 5 x 3 metres landscape. 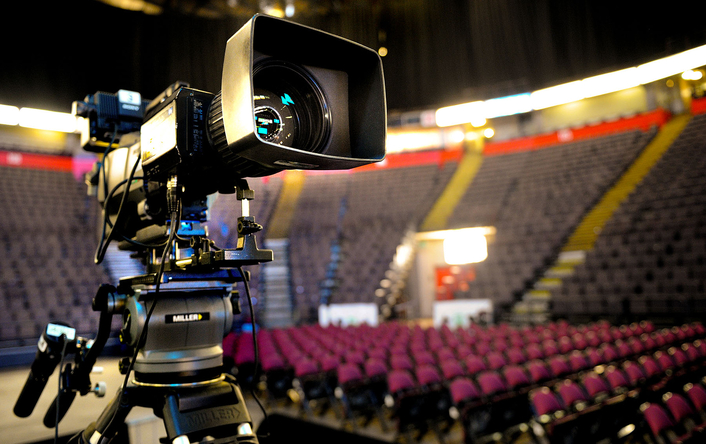 Adlib also purchased four new Sony HSC-100 Cameras for the tour, two of which are positioned FOH, fitted with Canon HJ40x10 long throw Lenses, while the other two are deployed either side of stage to catch the close-up action.
They are mixed by Mrs Brown’s Video Director, Eric O’Carroll using a Blackmagic Atem 2 also from Adlib.
Adlib is currently expanding its video department in order to offer the best and most flexible and cost-efficient options to all its clients wanting video in their production packages. In addition to the new LED screen and cameras, the fibre signal distribution systems have also been upgraded.

One of the general requests from Mrs Brown’s production team was that they didn’t want any cabling to be visible, so Adlib engineered a 47 metre cable bridge for the tour, emanating from the backstage drape line   to the rear of FOH which takes care of the cabling for the PA and LED delay screens.

Time Saving Truss
All aspects of the production are also designed to be time critical. With the first get-in at each venue on the day of the first show, tight co-ordination is needed with each of the venue’s crew so they can get their seats and infrastructure in place in time for doors.
The new Prolyte S36 trussing was specified and purchased with this in mind. The majority of the lighting fixtures stay in the truss for travel, saving considerable time during get ins and outs as well as being expedient on truck space, reducing the number of flight-cases needed.

Laughing Lighting
The 2015 tour lighting design was again created by Mike Summerfield who has been on-board for several years and is one of several familiar faces. The client likes to keep as many of the same team on-board where possible.
It features a selection of moving lights including Martin MAC Viper Profiles and Washes and ARRI 2Ks. The lighting aesthetic is bright, bold and rambunctious – much like the humour!

Also new this year, Adlib added a pipe-and-drape specialist to their crew to look after the copious amounts of this ingenious production asset which is being supplied to provide all the quick-change areas, dressing rooms, green rooms, catering and other backstage facilities.
These are also all fed with a full show relay system - plasma screens, video and audio feeds, - all requiring a precision set up in addition to all the main stage elements of the show.

Hilarious Sound
FOH engineer Kenny Perrin has ensured Mrs Brown’s sonic excellence for the last decade and continues this year utilising another Coda Audio system from Adlib. The show has used Coda for some time with great success.

A typical set up will be main hangs of 14 x Coda LA12s with 3 x ViRAY under hangs a side, plus an array of 14 x ViRAY a side for side hangs, paired with four Coda Subs a side on the ground, A centre cluster of four ViRAY fills the mid stalls and two delay hangs of six ViRAY a side approximately half way down the hall, to get the vocal kicking right to the back of the room and maintain even levels throughout the space.
Kenny has substantial experience in engineering comedy performance and understands the detail needed to deliver the punch lines and gags so essential to the genre. “Coda is absolutely brilliant for vocal clarity and definition,” he affirms. 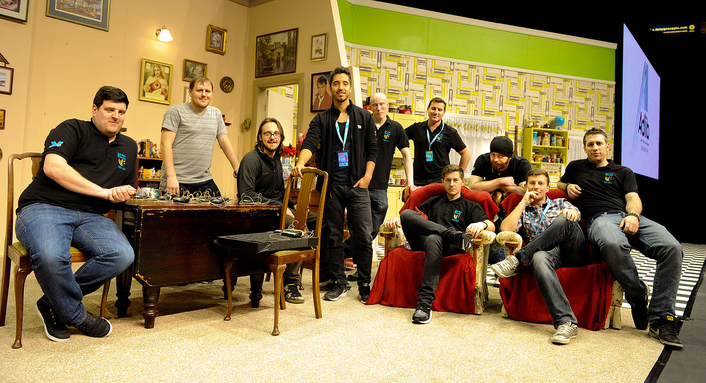 Adlib’s Audio, Lighting & AV crew who work on the tour

His console of choice is currently a Soundcraft Vi6, using all the on-boards with a selection of compressors and de-essers on Brendan O’Carroll (Mrs. Brown), complete with a set of Lake LM44s across some of the vocal groups for fine tuning. Kenny has specified Adlib’s new Vi7000 console for the next leg of the tour to give him more dynamic EQ via the onboard DPR-901 processing, which is an easy upgrade due to the show compatibility with the Vi6.
He also mixes monitors from FOH. For side fills they have been using a couple of L-Acoustics ARCS cabinets as stage monitors together with some Adlib AA81s for hot-spot speakers.

There are 14 people in the cast, however the channel count bumps up effortlessly to 68 with all the behind-the-scenes elements - record mics for the camera operators so they can hear the audience through their headsets, feeds to video world, the show relay mix to catering and the dressing rooms etc. – plus radio mics, spares, and on top of that, a load of playback and spot effects run via MADI and his Apple Mac running QLab.
While getting perfect audio on the show is always challenging, especially with the amount of ad-libbing involved, keeping up with Brendan certainly keeps Kenny on his toes!

“I’m still laughing as much as I did when we started working with this show which is a good sign,” he comments. “There is always lots of fresh, new material and often a bunch of ‘in’ jokes going on as well! The entire crew absolutely love and appreciate the experience of working on this!”
Kevin commented, “It’s a fantastic tour for Adlib, the show is side-splittingly funny and highly entertaining, and after 15 years still at the cutting edge of humour. We also have a really fluid dialogue with everyone involved in the production side, and they trust us implicitly to deliver the best technical specs and very highest production standards”.