Adlib Raised Up By John Barrowman

John Barrowman on his "You Raise Me Up" Tour
Adlib supplied full technical production - lighting, projection and audio - for the recent John Barrowman ‘Raise Me Up’ UK tour which saw the multi-talented entertainer take his musicality combined with personal stories, into a mix of theatres, concert halls and arenas around the country. Steve Rayment once again headed up the tour as production manager.

It is the sixth JB tour in which Adlib has been involved. The first one was in 2008, and once again, the Liverpool based company won the business because they could offer all the resources and flexibility of a single source technical solution, making the package cost-effective as well as efficient to their client.

Beautiful Sound
A Coda ViRAY system was chosen by FOH engineer Walter Jaquiss. He was one of the first engineers to take its predecessor LA12 out on the previous two JB tours and wanted a similar sound but in a smaller more contemporary package, so ViRAY was perfect. It was particularly important to have a compact sized system as weight loading and physical size / sight lines were issues in several places.

Adlib’s Alan Harrison, PA systems tech and the person fine tuning the system each day, commented, “The ViRAY gave us maximum control and SPL everywhere it was needed – it really is a hugely dynamic system.” He is a big advocate of the brand, especially for theatre / cabaret style acts like this. 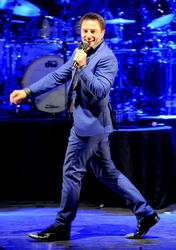 A typical set up would be 16 x ViRAY elements per side with six SCP subs set up where possible in a left-centre-right configuration on the floor.

“It’s all about the definition of every single source onstage for this one,” explained Alan referring to JB and his seven piece band. With drums, bass, guitar, keyboards and a three piece brass section plus his very strong vocals … it was an intricate task to separate these out, and each individual sound needed to be ‘spot-on’.

Overall, Alan concludes that the Coda sound is “unmatchable” in its ability to deliver smooth, very clear sound right across a room for this style of performance.

For lip fills and in / out fills as needed, they used the TiRAY – Coda’s smallest line array speaker – which, for their miniscule dimensions, emit a huge amount of power and definition.

For processing and EQ, they used one of Adlib’s standard Lake racks with 2 x LM44s and a pair of LM26s and he used a combination of AFMG SysTune and Rational Acoustics’ Smaart to get the balance just right every day.

Having mixed John Barrowman's tours for over six years, Walter was asked back to mix FOH on his recent UK tour, again with Adlib being the preferred audio supplier. This time he chose a Soundcraft Vi3000.

He was attracted to the Vi3000 for a number of reasons. “Familiarity, quality and size” were priorities he revealed. Having always mixed John Barrowman's live tours on the Vi6 in the past, it was a seamless change to move to the Vi3000. With the console software and layout nearly identical to the other Vi platforms, he only needed the 3 days of scheduled production rehearsals prior to the start of the tour to be able to create his show file.

“We also needed a smaller footprint at FOH that would take up less seats and in-turn reduce the truck pack,” he further explained. Specifying a Vi3000 for both FOH and monitors gained the tour an entire row of a truck-space without compromising on any of the audio requirements – mainly due to no local rack being required and a smaller console frame.

Walter had the console fitted with an extra two MADI cards. He could run MADI with a fibre multicore, MADI for the Realtime Rack platform and Dante for recording to Reaper simultaneously as well as using some of the spare Dante streams for vocal inserts via Waves Multirack running natively on his MacBook Pro.

His FOH console was supplied with one of Adlib's standard UAD Realtime Rack plugin setups, a MADI based I/O environment that gave a minimum of 16 patchable streams of UAD plugins hosted by a pre-authorised device, broadly similar to the UAD Apollo, it comes pre-wired and installed in all of their touring Vi3000 packages. 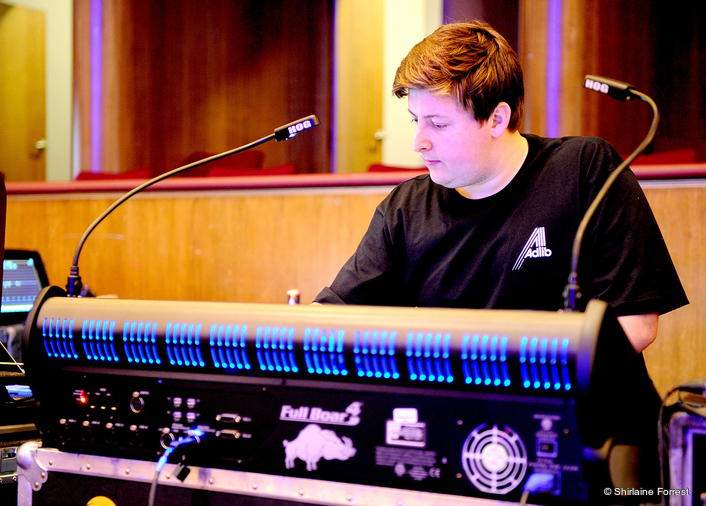 “A combination of low latency and high quality was my main reason for requesting this,” said Walter, adding that the set up allowed him to introduce some extra high quality FX into his mix on top of the Vi3000 inbuilt FX as well as giving access to various studio based compressor and channel strip plugins that “we now see as standard in many other live consoles”.

“The combination of the Vi3000, the UAD Realtime Rack and the Coda ViRAY gave me the tools I needed to deliver John's shows to artist and management expectations,” concluded Walter.

Mixing a busy 56 inputs from stage was the main challenge, to produce a smooth, high clarity fully intelligible sound, for which Walter and the Coda system were a perfect combination.

The monitor set up continued on an expedient theme with another Soundcraft Vi3000. The band were all on Shure hard wired IEMs, with wireless Sennheiser G3 IEMs for JB and MD Matt Brind.

A pair of Adlib MP2 wedges were provided as stage fills for the four dancers.

It was a quick and easy to set-up stage, and also nice and quiet, which was great help for the FOH mix. Having the majority of hard-wired channels also meant they didn’t have to spend too much time searching for available frequencies.

Glorious Lighting
Adlib also supplied lighting to the last tour, but this year their own award winning LD and visual designer Ian Tomlinson created the lighting scheme, the principal criteria being that it needed to fit into  the available truck space and offer all the diversity and scope needed for a JB live show embracing multiple performance styles.

Ryan Hopkins was on-board to operate and direct the lighting on the road, before which he spent a few days with Ian in Adlib’s WYSIWYG suite plus a couple of days production rehearsals at Millennium Studios in Bedford. Here things remained fluid right up until the last minute as the show was still being evolved.

The lighting rig needed to be simple yet have great creative reach. It consisted of two trusses, with six Martin MAC Viper Washes on the front and five MAC Viper Spots on the back together with four MAC Quantum Washes. These 15 overhead moving lights, programmed with great diligence, provided the majority of the general lighting and effects.

A set of white gauze legs masked the back truss and also framed the projection screen, and these were up-lit by Chauvet LED battens. 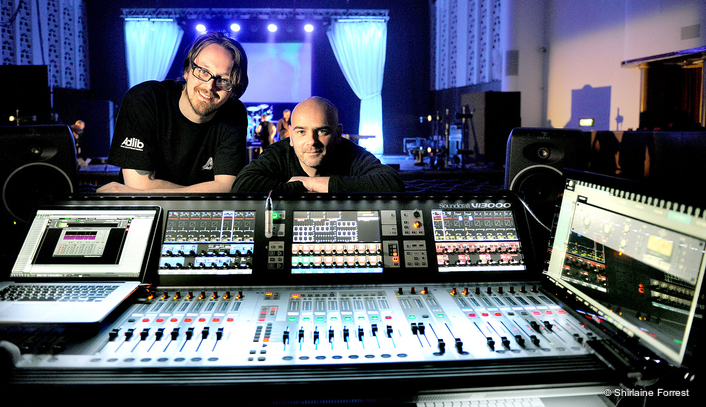 On the floor were four MAC Viper Spots, four MAC Aura LED wash lights and six boom poles – three per side – to give side lighting positions. Each of the booms was rigged with 2 x ETC Source Four Jr zoom profiles, the positioning bringing a touch of theatrical ambience to the stage.

The downstage fixtures in particular were ideal for neat cross-stage front lighting - as JB doesn’t like follow spots, and they were also perfect for filling the space for the dance routines. There were also four PAR cans in the downstage corners to augment lighting on JB’s face when at the centre mic position.

Supporting the front light were 10 x generic ‘birdies’ dotted around the front of stage and in the footlights positions which worked very effectively in the absence of spotlights. More LED Birdies were ensconced around the band for low level key lighting, one per band member, with a couple picking out the detail in the guitar rack and a few more toning the drum kit.

So it wasn’t a huge lighting rig, but it was maximised by intelligent and thoughtful use to support JB’s very dynamic and fast moving show … which could stretch to nearly three hours with a short interval.

Ryan operated lighting using a Hog 4 Full Boar console with a Hog 4 PC as tracking backup, and although the song lighting was all set up on Cue-stacks, he ran the show completely ‘live’ to deal with the ad libbing in between, and other improvisational moments which could be sprung on him at any time … which is always an exciting way to work!

Ryan also ran the video cues from his console – the video signal was run over one of Adlib’s fibre signal distribution systems, so their Catalyst media server – storing all the playback material - remained at FOH. 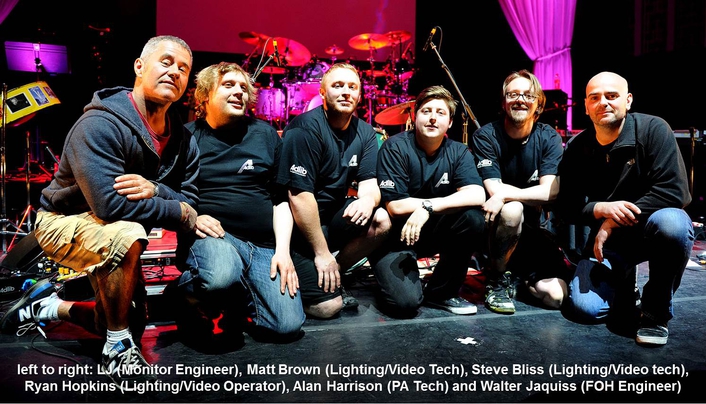 Joining Ryan on the lighting / visuals crew were Steve Bliss and Matt “Boris” Brown, nicknamed for his incredible resemblance in appearance … to London’s Mayor!

Adlib’s Client manager stated “working with John Barrowman since 2008 has been a genuine privilege. He is the ultimate professional and a brilliant energetic showman.

Not only does he have a remarkable TV & movie career from Torchwood, The Arrow, Desperate Housewives, Zero Dark Thirty and more, he has a strong affinity with the UK & his Scottish roots and thrives on playing his live shows in the UK. Providing a full production package has been key and the sound especially from the Coda Vi-RAY has been nothing short of stunning.”