Adlib Gets into Touch on Daryl Hall and John Oates Tour 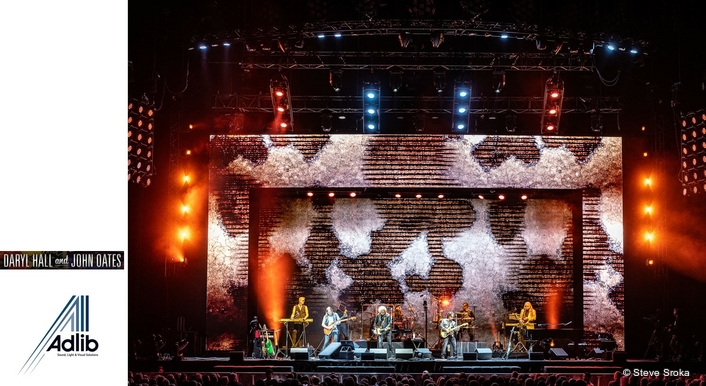 Adlib supplied full production – sound, lighting, video and rigging – plus crew for the recent UK tour by maverick US duo Daryl Hall and John Oates, whose impressive string of top 40 hits stretch back to the 1970s!

It’s the first time that Adlib has supplied all technical disciplines for a Daryl Hall & John Oates tour.

After the UK tour, an Adlib control package and video servers went on to the Latin American leg of the tour, and then returned to Europe with the addition of a full audio package for the third segment and euro festival run. 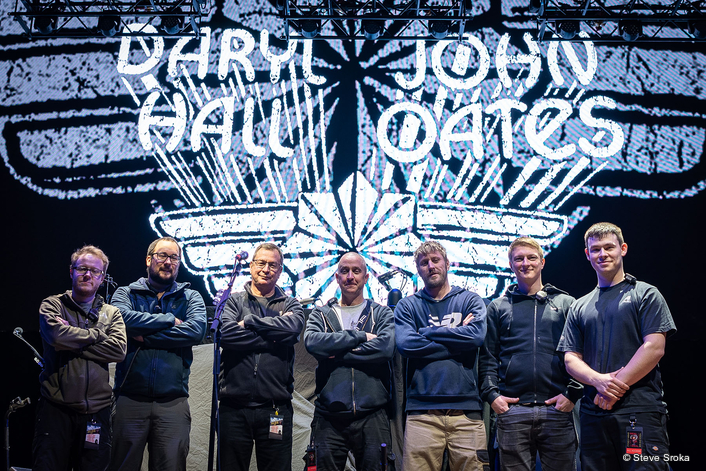 Adlib sent a top crew as always, Billy Bryson was the system tech, Jay Petch was the monitor and stage tech for the UK section of the tour and Billy was also the tech on the European festival dates.

The process started with some transatlantic conference calls and Skypes during which the existing successful sound designs were tweaked for Europe and followed up with extensive Email correspondence.

They again chose to work with an L-Acoustics PA to achieve the precise sound they wanted, deploying 12 x K1 plus 4 x K2 downfills for the main arrays and 12 x K2 for the side hangs.
For lip fills across the stage six L-Acoustics X8 were utilised, with outfills comprising 4 x ARCS II per side.

Subs were 16 x KS28, deployed in four blocks of four, tipped on end. The onstage sub in each stack was reversed and run in cardioid mode, at the request of Chris Salamone in continuity with the setup on their most recent US tour.

K2 downfills on the main hangs were ideal for extending the length of the line and maintaining tonal consistency to the front row. Utilising K2 on the side hangs enabled asymmetric high frequency coverage, minimising overlap with the main hangs via the mechanically adjustable L-Fins. 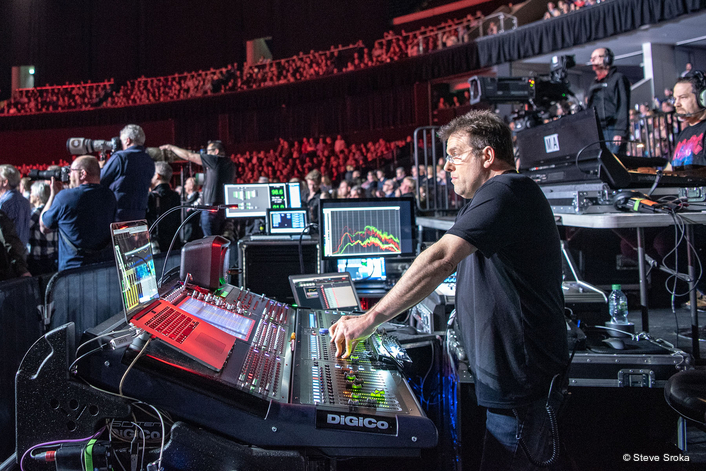 Whilst designing, the new L-Acoustics ‘Autosolver’ tools were employed within Soundvision to optimise the system. The tuning was further refined and tweaked before being verified on-site each morning. “The Autosolver tools give a great head-start,” explained Billy. “The accuracy in which a design can be tuned within Soundvision ensures complete tonal consistency when touring through venues of different sizes!”

Each day, the system was tuned and verified using Smaart8 and Room EQ Wizard audio measurement software. To assist this process, Billy used a Lectrosonics R400 wireless receiver together with an Earthworks M30BX measurement mic.
The monitor console was a Yamaha PM7 chosen by George Squires, driving 12 x Firehouse F12 wedges, which together with their associated amps were part of the band’s ‘universal’ touring system.

Adlib provided a 60-channel line system and power distro all built into one of their renowned ‘Monitor Wardrobe’ cases, designed and built to make setting up monitor world exceptionally quick and straightforward each day.
The 110V stage power for the US equipment was handled via Adlib, supplying 4kVA backline transformers, and two 7.5kVA transformers to feed the monitor amps.
They also used 10-ways of Sennheiser IEMs. 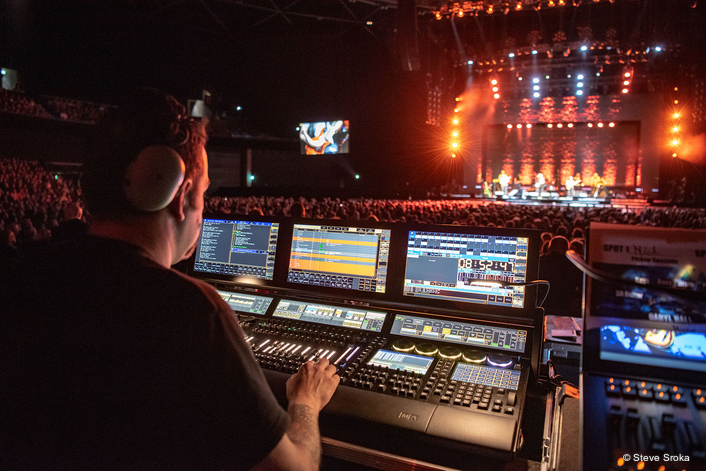 Craig commented that they all enjoyed working with production manager Jesper Luth and his crew who were all-round great people and receptive to their suggestions and feedback.
Whilst in Scotland, Jesper and a small group of the crew fully embraced the local culture and are now aficionados in Scottish Whiskey and the Highlands after a hiking trip to Loch Lomond!

Lighting & Video
The original production design for the tour was by Paul “Arlo” Guthrie. Jesper did the retrofit for Europe which was directed and operated on the road by Chris Lose, who liaised with Adlib’s Dave Eldridge on how to replicate the rig they had been using in the US.

It was based on a large block of LED video screen upstage and then a pros arch – two legs and a border – of LED downstage of that, altogether totalling 150 square metres of Unilumin UPADIII H05 driven by NovaStar MCTRL 4K processing.
Sub-hung trussing pods were rigged with Martin MAC Aura LED washes and Claypaky Mythos over the stage, more Mythos on side torms with some MAC Viper Profiles to fill in the gaps.

A curved front truss featured more MAC Viper Profiles, Aura XBs and Mythos and on the top rail, an eye-catching arc of 11 Portman P1s.
Adlib custom built more side torms - to the same dimensions as their American rig - to house 15 x ColorDash PAR-Hex 12s which were flown downstage left and right. These were also built into touring cases so the individual LED PARs could stay on the frames.

MAC Viper Performances on the advanced truss were specified for key lighting and to fill in any gaps over the stage.
A grandMA3 full size was used for lighting control, and Chris utilised Adlib’s programming suite during the prep while the rest of the crew made the most of the excellent prep area in the company’s new warehouse / office facility in Knowsley, Merseyside.

The biggest lighting challenge, recalls Dave, was recreating the exact shape of the design and building it around the two sets of video screens: “It was a team effort with lighting, rigging and video working together to ensure that all the elements and trusses matched up perfectly.”
Kevin Byatt was the touring lighting crew chief on the road, working alongside technicians Andy Rowe and Dave McCulloch who were joined by tour rigger Jon Barlow. 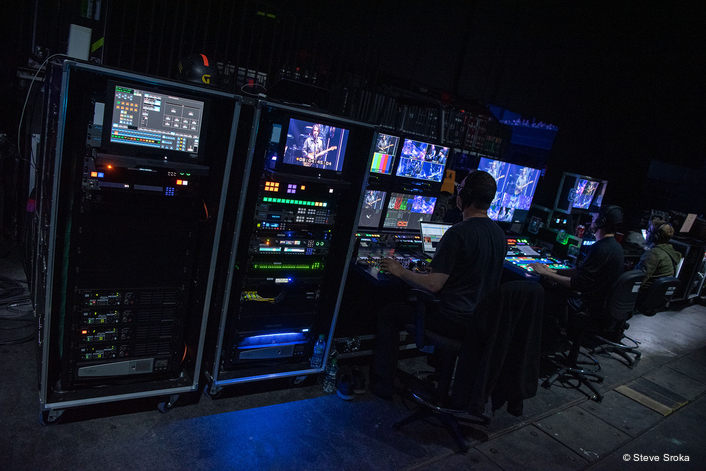 At the heart of the system was a Ross Video Carbonite Ultra 2ME switcher flypack and 4 x Sony HDC4300 cameras fitted with Canon UJ90, CJ45 and CJ20 lenses. There was also a range of Marshall Mini POV cameras which were dotted around the stage and clipped to instruments and other vantage points. The band’s live camera director was Jesse Byrd.

A Green Hippo Karst+ media server dealt with all the playback content which was supplied by Daryl Hall & John Oates’ production team.
Adlib’s video crew were Mark Taylor and Rob Bickerstaff who tech’d the LED, racks engineer Rob Fender and projectionist Ade Moore. The video was co-ordinated from the office by Rich Rowley.