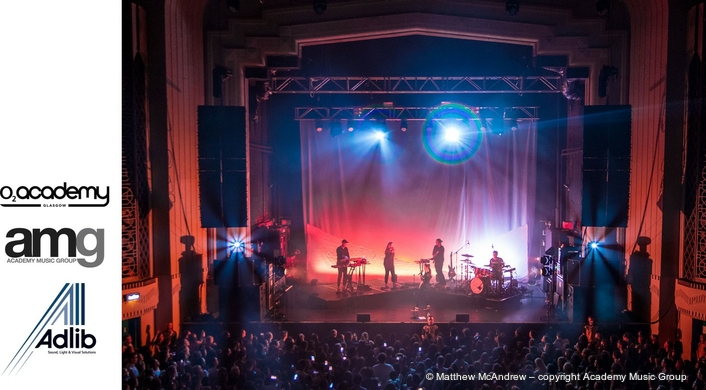 Adlib’s installation team has delivered another excellent touring spec system - including L-Acoustics and DiGiCo products - to one of the UK’s busiest and most successful live touring venues - Academy Music Group’s 2,550 capacity O2 Academy Glasgow in Scotland.

It follows similar recent Adlib installations at AMG’s O2 Forum Kentish Town in London, and O2 Academy venues in Bristol and Newcastle in the last 18 months, all of which also feature L-Acoustics and DiGiCo combinations.

Led by John Hughes and Roger Kirby, Adlib collaborated closely with Jeff Woodford, applications engineer (installations) and Sergey Becker applications engineer (touring) from L-Acoustics, as the perfect system proved to be a careful blend of the requirements from these two exacting disciplines. Together, they worked with Academy Music Group’s Divisional Manager (North), Steve Hoyland.

Adlib also consulted the experience and knowledge of its own production and touring crews and engineers, especially Andy Russell, who all frequently work in the venue which has a theatrical interior, including many original art deco features. 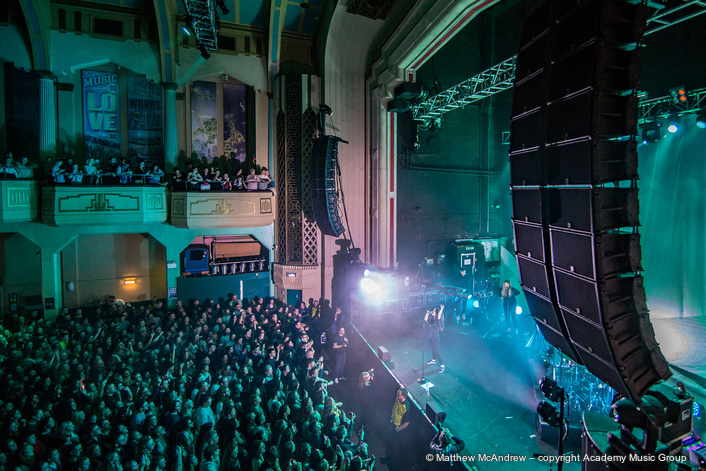 Additionally, O2 Academy Glasgow’s Technical Manager Rob Watson and General Manager Chris Johnston had valuable input, as they are well acquainted with the many nuances and intricacies of the environment.

Says Roger, “The collective input from all these slightly different perspectives made the process more dynamic and very enjoyable.”

The success of the other recent Academy Music Group L-Acoustics installations also played a part and made the L-Acoustics and DiGiCo combination a favourite choice.

The room was initially modelled using Soundvision acoustic profiling software, which suggested that - particularly with its 270-degree seated wrap-around balcony and pros arch design - an L-Acoustics K2 system would produce the best results.

The ultimate objective was to have a versatile system that “delivered superb coverage and would work well for live rock’n’roll shows, late-night club nights and spoken word and comedy events” explained Steve.

Adlib’s Scottish operation had provided similar PAs for some one-off events over the last year, which were a big hit with everyone, so the team was confident that K2 was an appropriate and excellent all-round solution.

It has great reputation within the industry and the PA of choice for many touring artists, often the first option on production riders. “We wanted a system that was both high in quality and would stand the test of time” says Steve. 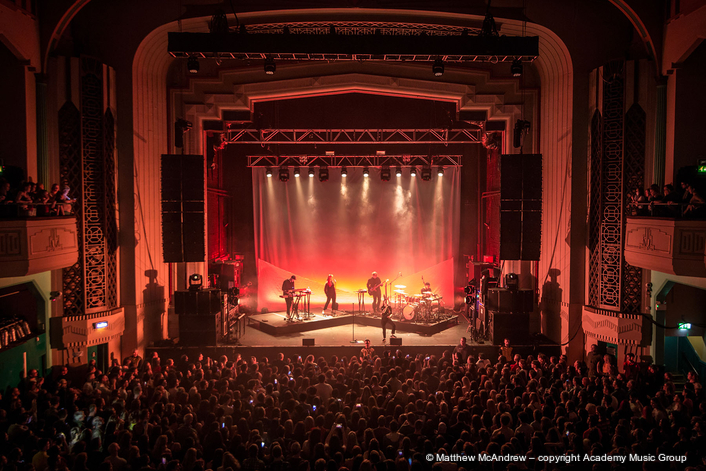 O2 Academy Glasgow also happens to be one of Roger Kirby’s favourite live UK venues, so he was delighted to be part of producing this sonic excellence. “The layout and the décor – much of it restored in Academy Music Group’s original renovations in 2003 - is fantastic, as is the sense of proportion, and shows always have an amazing vibe!”

Roger also notes that while 2,550 is a good ‘medium’ sized venue, somehow the gigs always feel intimate and personal, “which is why audiences love it so much and feel involved.”

The new system itself comprises left and right flown arrays of 10 K2 speakers a side – hung from new points - and 12 x L-Acoustics SB28 subs distributed on and beneath the stage.

Four ARCSII a side provide near field stalls fills, joined by two X8 passive coaxial speakers on the centre of the stage apron to fill the area just above and behind the barrier line.

All of these are driven by LA8 amplifiers located in a new climate-controlled amp room that was created in the most recent refurbishment plans.
The FOH and monitor consoles are both DiGiCo SD12s with individual D2 rack stage racks.

In addition to these being popular current touring consoles with which most engineers will be familiar, the choice was influenced by the “exceptional training and tech support” available from DiGiCo confirmed Roger.

Being a heritage building with Listed status, the ornate decoration, original Art Deco features and plasterwork meant there were plenty of considerations, especially when it came to the roof loading capacity, all of which had to be overcome with Academy Music Group’s expertise. 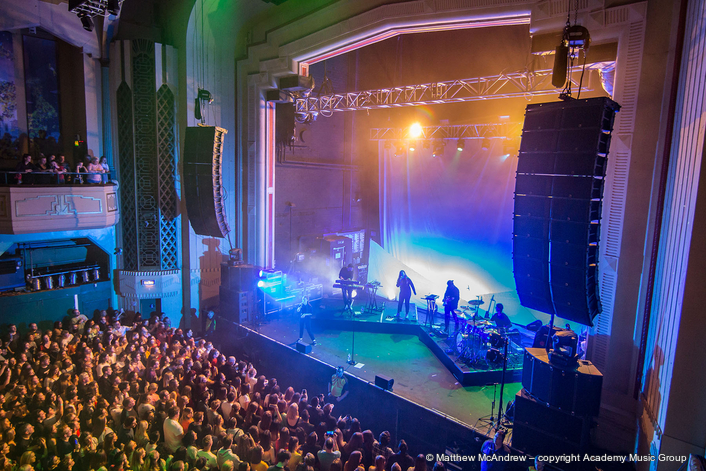 Adlib supplied the two LP1000 D8 hoists – sourced from Merseyside based LTM – to hang the two K2 arrays, and the new steelwork and points necessary to fly these were designed and installed by Manchester-based structural experts, MJ Consulting Engineers.

For monitors, Adlib specified and supplied a sensible general-purpose system to service a wide array of artists, based around 10 of their famous MP4 wedges driven by Linear Research 44M20 amps - a combination that is tried-and-tested, very flexible, sounds brilliant and is constantly out working via Adlib’s busy hire division.

A new line system is part of the install together with an input multicore and bespoke patch panels for each of the console breakouts. This new connectivity is part of ensuring that the system is as reliable and rock solid as possible with an amount of future-proofing.

The first artists to have used and benefited from the new audio installation have included Jorja Smith, Richie Hawtin, Glenn Hughes, Daughtry and Rudimental and it’s been exceptionally well received by engineers.