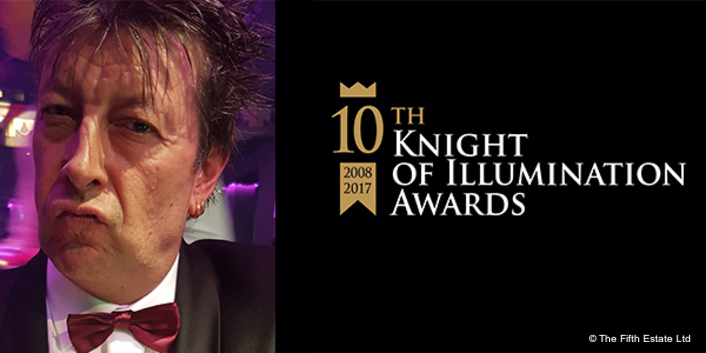 Internationally renowned production manager Ola Melzig - Head of Production for Eurovision 2017 - is set to host the glamorous tenth anniversary edition of the Knight of Illumination Awards. The prestigious ceremony will be held on the 17th of September at one of London’s most iconic live entertainment venues, the Eventim Apollo in Hammersmith.

Throughout his eclectic career, Melzig has coordinated innumerable high-profile shows around the globe, including the Commonwealth Games, the Nobel Prize Banquet, and now no fewer than 12 Eurovision productions – all of which are a long way from his first role in the industry, working as a stagehand in 1989. At the 2017 TPI Awards, Melzig was announced 'Production Manager of the Year' as voted for by the public and his peers.

"The Knight of Illumination Awards has become a 'must attend' event in our industry," says Melzig. "Not only does it offer an entertaining evening among notable lighting designers, it's also a flat out great party!"

The Knight of Illumination Awards is the largest UK-based awards ceremony designed to recognise and celebrate the phenomenal talents of international lighting and digital content designers for their spectacular work across the United Kingdom. Melzig adds: "The only thing that could possibly make it better is if I could win a sword!"

KOI 2017 is now open for nominations which can be submitted for the Television & Concert Touring & Events categories at the Knight of Illumination website.

The Knight of Illumination Awards was conceived in 2008 by Claypaky alongside lighting designer Durham Marenghi and Jennie Marenghi. The event is organised and managed by The Fifth Estate Ltd, the Association of Lighting Designers (ALD) and the Society of Television Lighting Designers (STLD).

To find out more about the sectors and subcategories, or for information on how to submit an entry for Television or Concert Touring & Events, please visit www.knight-of-illumination.com/categories.

If you would like to hear more about sponsorship opportunities, please contact Andrew Organ at The Fifth Estate andrew@thefifthestate.co.uk or on 01273 660 784.