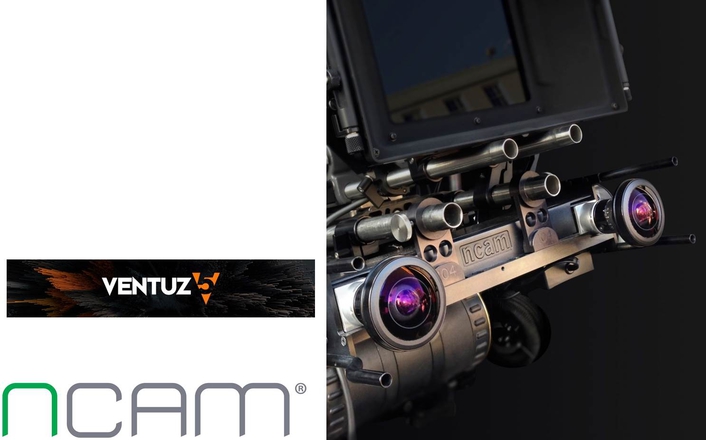 The integration provides a streamlined tracking data workflow between the Ncam system and the real-time 3D Ventuz content, which results in a flawless communication between real-time graphics and actual camera movements for virtual or augmented projects. “The flexible nature of the Ncam system makes it the perfect partner for the Ventuz software suite,” said David Paniego, Product Marketing Manager of Ventuz Technology. “This marriage of technology isn’t only applicable to the broadcast market though, as we also see an increased interest from the professional AV industry.”

Ncam offers camera tracking that does not require a complicated setup or any markers in the environment. Instead, the technology automatically identifies and tracks natural features via its multi-sensor bar which is mounted to the main shooting camera. This simple setup makes the system ideal for camera tracking on location or shoulder-held shots and provides a level of flexibility that has been the key to the company’s success and its rapid adoption by broadcasters and filmmakers worldwide. The system has been used for some of the most advanced and revolutionary augmented reality projects in recent years.

“Being able to integrate with the Ncam camera tracking data is a fantastic addition to the Ventuz workflow,” added Paniego. “Not only did we experience a very fruitful cooperation with the Ncam team, we also believe that the combination of our products is a perfect fit for Augmented Reality and Virtual Studio projects of any kind. This falls in line with the recently introduced Live-Link between Cinema 4D and Ventuz, and the improved material engine for more realistic results. All together Ventuz 5 is well equipped for better-looking augmented and virtual projects.”

This integration displays the focus of the current version of the software, Ventuz 5, which enhances usability and simplifies the implementation of various technologies into the real-time graphics environment.

"Ventuz is a trusted, cutting-edge, real-time software provider for both broadcast and AV markets, with a very similar dynamic and innovative approach to AR/VR technology as Ncam, hence why this partnership makes sense for everyone,“ said Nic Hatch, CEO, Ncam. “With the Ventuz integration, we can provide our customers a richer VR/AR workflow experience and it will also allow us to tap into new markets.”

Much interest for the technology collaboration has been shown by Ventuz customers, especially from the East Asian market, where the Ventuz software suite has been used for a number of augmented reality projects, most recently by CCTV for their Sports Awards Ceremony.

About Ventuz Technology
Ventuz Technology AG, located in Munich, Germany, is developer of 3D real-time technologies for presentations, events and broadcast graphics. Their main goal is the creation of solutions that combine state-of-the-art technologies with high class design and thus surpass the visual expectations of any audience. A central focus lies on interactive applications.
Among the brands that have used Ventuz for their events and presentations are Microsoft, Porsche, Bosch, Adidas and many more. Furthermore, several TV-stations and production companies worldwide are utilizing the broadcast-version of Ventuz, such as Fox Sports. Some of the best known productions which have been produced with Ventuz are ”Who wants to be a millionaire?”, ”Million Pound Drop” and “Big Brother”.