Ncam has announced that Sky Deutschland will be using Ncam’s unique real-time camera tracking technology to generate augmented reality graphics in support of its live coverage of the German Bundesliga football championship for a second time this coming season.

Sky recently announced that it has signed a new four-year extension to its Bundesliga rights package, starting with the 2017/2018 season. The agreement will see Sky broadcast 572 live matches per year from the Bundesliga and Bundesliga 2, once again relying on Ncam’s augmented reality solution to generate powerful studio and pitch-side graphics.

Last season the Sky Sports and Sky Sports News production department of the German media company was solely responsible for providing the coverage of 612 Bundesliga matches and used Ncam’s camera tracking technology to bring a ‘wow’ factor to their audience. 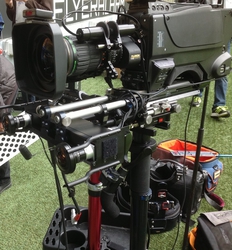 The broadcaster faced the major challenge of having to generate coverage from pitch level instead of working with a dedicated Bundesliga studio. “This way of working limits the introduction of new technologies, of course,” explained Alessandro Reitano, VP Sports Production at Sky Deutschland. “However, Sky Deutschland was able to fix the Ncam device onto the Steadicam camera stabiliser mount, to bring our Bundesliga coverage to the next level.”

“We really appreciate Ncam’s strong interface with our Vizrt graphics environment and its easy integration into our graphics workflow,” continued Reitano. “We can now use the Ncam system not only on Steadicam, but on other types of camera systems, which retains the same level of workflow integration.”

Ncam was put to use on Sky Deutschalnd’s Match of the Week coverage, particularly during the pre half-time and post match show, adding an extra layer of engaging visuals to support the broadcaster’s premium editorial coverage of the matches.

“We were the first German TV broadcaster covering the Bundesliga to use Ncam on a Steadicam mount,” added Reitano. “We believe this technology really puts us ahead of our competitors and gives football fans a highly stimulating visual experience in terms of advanced graphics.”