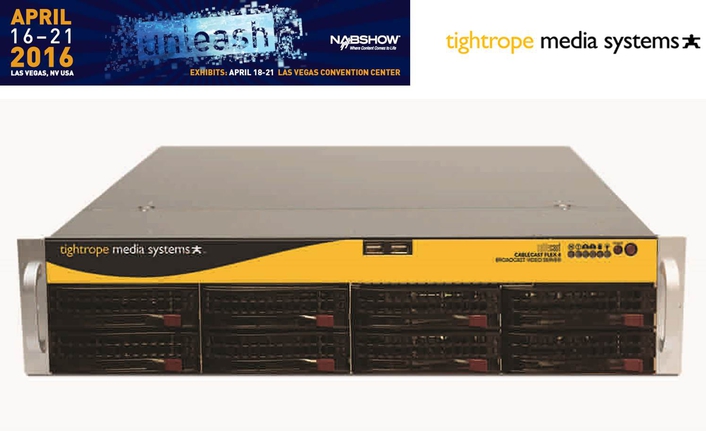 “It is very common for PEG stations, digital sub-channel broadcasters and educational campuses to operate three or more channels,” said Steve Israelsky, VP Sales and Marketing, Tightrope Media Systems. “With Cablecast Flex 4, these customers will be able to use a single server to do what previously required two. This not only lowers their equipment purchase costs, but also enables ongoing savings in space, power, cooling and systems maintenance.”

Users can change the input and output configuration through software controls, future-proofing the servers as customers’ needs and channel line-ups evolve. The configuration flexibility of the Cablecast Flex line also extends to the servers’ built-in storage, enabling customers to match the systems’ internal capacity to their needs. Cablecast Flex 4 servers will be available with 16TB or 32TB of useable content storage configured as RAID5 for performance and fault tolerance. An additional model without an internal drive array will be offered soon for customers who prefer to connect an external storage system through a Fiber Channel or iSCSI interface.

Cablecast Flex servers include all of the powerful features and benefits that have delighted users of the preceding Cablecast SX series, delivering network-class reliability and comprehensive functionality in an affordable package. Multi-format playout enables media files encoded in MPEG2, H.264, DVCPro, ProRes and other formats to be played directly to air, with no transcoding required. Integrated live input encoding, channel branding and HD/SD up- and down-conversion can be controlled easily through Cablecast’s intuitive software while minimizing the need for costly and cumbersome external equipment.

“For more than a decade, cable and broadcast stations have depended on Cablecast servers and software to easily, reliably and affordably manage and automate their channel operations,” continued Israelsky. “Cablecast Flex servers continue this tradition while giving our customers even more value, greater flexibility and a forward-looking platform for the future.”

Cablecast Flex servers will start shipping on May 16.