NHL franchise finds operational value in ZEPLAY instant replay system’s speed, reliability, affordability and ergonomic design
The Tampa Bay Lightning is giving its fans at Amalie Arena more to follow beyond the high-intensity NHL action on the ice.  As part of a recent $65 million renovation that includes a new production control room and the largest indoor video board in a North American arena, Tightrope Media Systems’ ZEPLAY slo-mo instant replay solution is delivering impactful, in-game highlights with the same lightning-fast speed as the front line.

“As the game unfolds, Lightning fans want to see a replay of that save or that goal, or any exciting play moments after it happens.  ZEPLAY keeps our fans happy by giving them all the replays they want without delay,” said Jorge Rosell, director of broadcast production systems for the Tampa Bay Lightning.

“The issue of speed goes beyond how quickly the crowd gets to see a replay,” he continued. “Before it becomes part of our live show, our director has to see it first.  The faster we obtain his approval, the faster we can get it out to the video board.  ZEPLAY simplifies the whole process because the operator only has to look at one screen to see the video choices, and all of the key features and functions are easily accessible from the controller’s T-Bar.” 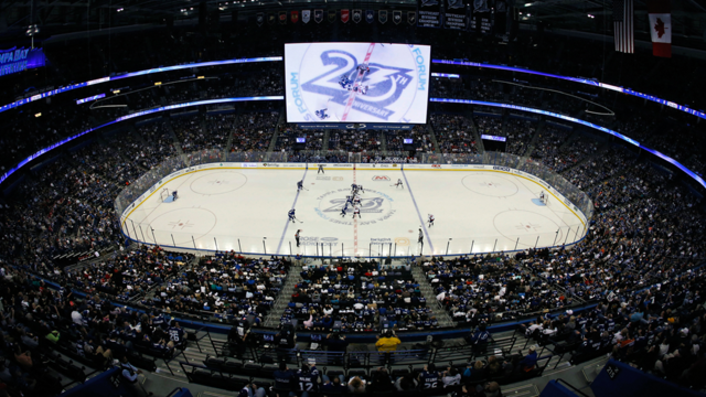 Speed also comes into play when ZEPLAY is used to furnish official replays to the referees.  This occurs often during video production for The Tampa Bay Storm, the Arena Football League (AFL) team that also calls Amalie Arena home.  Since there are usually no broadcast trucks or rights holders associated with AFL games, Rosell said they often provide official replays and live-stream their big board show, including ZEPLAY replays and highlight packages, via the team’s website.

During the recent renovation, the production control room—which has a floor to ceiling window overlooking center-ice—went 1080i HD with ZEPLAY, a new Ross Carbonite 24 2-M/E production switcher and a Chyron Lex 3 live graphics system.  After discovering that the existing EVS system was too cost-prohibitive to upgrade, Rosell began looking at more affordable options that wouldn’t compromise operational features or reliability.  He approached the Ottawa Senators NHL team in Canada to inquire how they liked their two ZEPLAY systems.

“The Senators were the first NHL team to choose ZEPLAY, and they were very happy with it, noting its ease of use in addition to its affordability,” Rosell said.  “We jumped at the opportunity to be the second NHL arena to get a ZEPLAY.”

Tampa Bay Lightning games are covered by up to 12 cameras, including studio/field, robotic, goal-cams and wireless units.  With four HD-SDI inputs/outputs, ZEPLAY accesses camera signals from a Pesa Cheetah house router.  Besides creating instant replays, the system also plays out B-Roll, including highlight packages, directly to the video boards during show opens and intermissions.  When lower-third supers, keys, mortices or other video effects are needed, ZEPLAY’s output goes through the Carbonite switcher/Chyron Lex production chain before display on the large board inside the bowl.

In the near future, ZEPLAY will also send replays to a custom app that lets fans view them on their smartphones and mobile devices inside the arena.