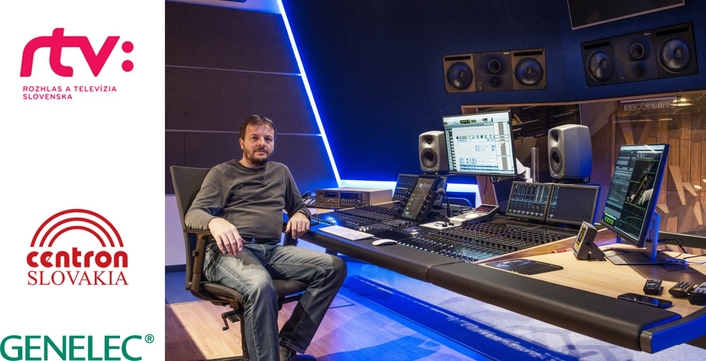 In Slovakia, Genelec monitors can be found in many of the country’s most celebrated control rooms, including key facilities within Radio and Television of Slovakia (RTVS). The Bratislava-based broadcasting facility recently completed the renovation of RTVS Slovak Radio’s Studio 2 control room, complete with a brand new Genelec 5.1 system, while numerous other RTVS editing rooms, studios and outside broadcast vans now boast Genelec solutions.

Highly prestigious, the projects represent the latest stage in a long and successful relationship between Genelec and its regional partner, Centron Slovakia. Over the course of 20 years, the two companies have provided countless bespoke solutions across the recording, broadcasting and post-production markets. Working tirelessly to promote Genelec monitors throughout that time has been Brand Manager Richard Varkonda.

“Richard was nominated as the Genelec Brand Manager of 2016,” explains Genelec Sales Manager for Eastern Europe and Russia, Jukka Latva-Hakuni. “He has remarkable experience in designing high end control rooms within Slovakia that not only perform perfectly, but look amazing as well.”

Over the last two decades, Varkonda has helped to shape the Slovakian industry, bringing his own deft design touch to countless projects, as well as his deep understanding of Genelec’s pioneering technology. From specifying 1037 stereo mains into regional recording studios in the 1990s, to creating groundbreaking 1032-based 5.1 and 7.1 surround systems in the early 2000s, Varkonda has always sought to deploy the latest Genelec innovations.

Highlights include supplying the Slovak National Theatre with a solution based on the three-way 1038B. “The audio system for the Slovak National Theatre was designed by the general contractor for the theatre, who already understood their monitoring requirements and selected Genelec as the optimum solution,” Varkonda explains, adding that having agreed the system for the main control room, Centron was then invited to submit a plan for the video element of the design, plus accompanying monitoring. “Thus we installed a 5.1 system based on 8020 monitors in the video control room as well.”

Another landmark project arrived in 2011 when Centron was asked to entirely redesign the recording control room of the Slovak Philharmonic Orchestra. “The Slovak Philharmonic was under total reconstruction and included within the proposed plan was a new control room for music recording,” Varkonda recalls. The proposed design was neither acoustically nor

We saved a lot of money by avoiding the need for an analogue matrix and converters - and we achieved bit-to-bit perfect reproduction.” Most recently came the refurbishment of Studio 2 within RTVS Slovak Radio – home to the Slovak Radio Symphony Orchestra. “There were already a number of sound engineers within RTVS who had experience with Genelec, and who had attended a presentation of SAM technology, hosted by Genelec R&D Director Dr Aki Mäkivirta, in 2015,” Varkonda explains. “At that time, they recognised Genelec products as a new reference point for their facility. The technical director, Mr Zachar, and Chief Sound Engineer, Lubos Valky, decided that Genelec was the best brand for them, and so they chose my design.” The control room is now equipped with a 5.1 SAM system based on three-way 1238AC front channels and 1237A rear channels, plus a pair of 7271 subwoofers. The room is also distinguished as the only RTVS facility with monitors flush mounted into the walls. “It is now the most powerful monitoring system within the RTVS building,” adds Varkonda. “Slovakia is a culturally very strong, especially when it comes to music and symphony orchestras, so the work that Richard has been doing for Genelec is very important,” says Jukka Latva-Hakuni. “We are privileged to work closely with Centron Slovakia and with Richard, both designing these wonderful rooms and guiding the projects from their starting point to their completion. I look forward to another decade of great projects in Slovakia.”

more than a decade to allow studio monitors to be networked, configured and calibrated for the user’s specific acoustic environment. Each SAM monitor or subwoofer is equipped with advanced internal DSP circuitry, which tightly integrates with the GLM (Genelec Loudspeaker Manager) software application, running on Mac or PC. GLM’s reference microphone kit allows the user’s acoustic environment to be analysed, after which GLM’s AutoCal feature optimises each SAM monitor for level, distance delay, subwoofer crossover phase and room response

equalisation, with the option of further fine tuning by the user. By minimising the room’s influence on the sound, SAM monitors deliver an unrivalled reference, with excellent translation between rooms.

Since the founding of Genelec in 1978, professional audio monitoring has been at the core of the business. An unrivalled commitment to research and development has resulted in a number of industry firsts and established Genelec as the industry leader in active monitors. Over 35 years later Genelec monitoring products remain true to the original philosophy, offering reliability, neutral sound reproduction regardless of size, as well as the ability to adapt to the acoustic conditions of the listening environment. Genelec customers receive paramount support in the field, from acoustical advice and calibration services to technical service and long product life span. Buying a Genelec product is a secure long-term investment in outstanding and reliable audio monitoring.