Rising from nothing: London Live talks about the challenge of building a channel from scratch 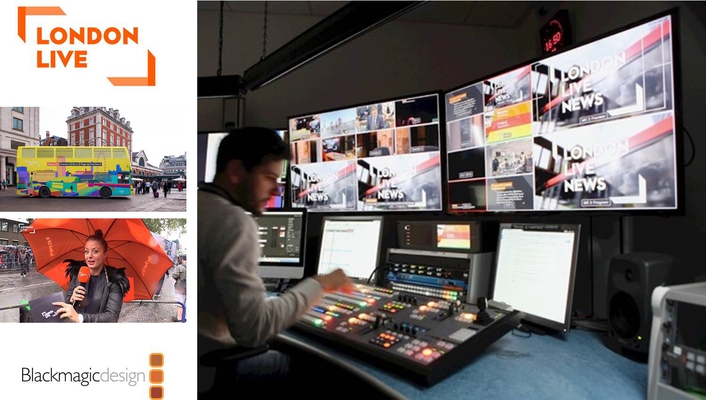 London Live has been called the metropolitan face of Ofcom’s Local TV initiative, following its launch in 2014. From its purpose built studios in Kensington, the channel produces five hours of news, arts and entertainment programing every day, which is targeted at the 4.4 million homes in Greater London.

Marco Bizotto, one of the channel’s engineers, gives us a tour of the studio facilities and the bespoke Blackmagic Design workflow that was developed specifically for London Live’s varied live production requirements.

“Video news content is a huge part of our daily production schedule, and we have more than 50 people working as video journalists, technicians, producers, editors and creatives. The main studio was previously office space that was completely transformed to host the channel, and our entire production facility.

Blank Canvas
“It is divided into three distinct areas, and equipped with eight cameras, from where we produce the majority of our news and current affairs programs, including daily news bulletins and the breakfast show. However, the facilities are flexible enough that we can also produce entertainment and live music programs as well as commercial shoots. There is also a smaller, more intimate studio with a two camera set up, two galleries that are equipped for studio production, and a Master Control Room (MCR).

“Establishing a new channel from scratch is a major undertaking, and we needed to find a balance between broadcast grade equipment that would support daily multicam productions, and how we could achieve that within the project budget. This brief led us to developing a bespoke workflow built around Blackmagic Design broadcast equipment, which now forms part of our core infrastructure throughout London Live, for both studio and outside broadcasts.

“We currently produce and store all of our content in HD (1920x1080i50). HDMI signals from the cameras in the main studio are converted to SDI and fed through to the production gallery where the program mix is produced with an ATEM 2 M/E Production Studio 4K switcher. The smaller studio has a portable rack featuring an ATEM production switcher, HyperDeck Studio Pro broadcast deck and a MultiView 16, which means we are able to produce additional content, entirely independently.

“The program feeds are then fed through to our Universal Videohub 72 x 72 router, frame synced and embedded with delayed audio. From there, the signals are sent out via an IP link to an external partner for transmission.

Heavyweight Performer
“Blackmagic infrastructure plays a big role in our outside broadcast productions. We recently covered a huge boxing competition staged at Alexandra Palace, where we broadcast more than seven hours of live bouts from the Haringey Boxing Cup.

“As well as four boxing rings, which were used for the three days of competition, we also had a studio set up for guests, commentary and debate in between the live action. Production was divided into four submix positions, each supplied with a 9RU flyaway kit with an ATEM 1 M/E Production Studio 4K switcher, a Caspar CG graphics playout solution and an audio unit.

“Pre cut feeds were sent to the main production team based in our OB truck, also equipped with a ATEM 2 M/E switcher, scopes, intercom, QC instruments and a 40x40 Smart Videohub, where the final program mix was put together. This has been our biggest and most ambitious OB production to date and we were extremely happy with both the quality and variety of the content from the event, as well as the reaction from our viewers.

“As we continue our second full year of broadcasting, it’s clear that the investment in our facilities and our video production workflow have paid dividends, not only in terms of meeting the high production values that we hold, but also the flexibility that allows us to produce a huge variety of content that will help us continue to deliver relevant and engaging programs to the capital’s viewers.”