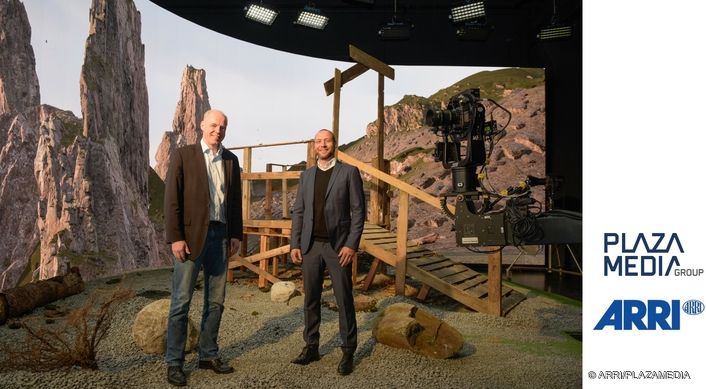 PLAZAMEDIA and ARRI are cooperating in the area of mixed reality: As part of the partnership, an “LED Volume Studio” has been set up in Studio 6 at PLAZAMEDIA in Ismaning near Munich as a pilot project, initially until the end of November 2021, which is intended to set new standards for virtual applications. As a globally active film technology company, ARRI brings a wide range of experience in high-end film productions as well as in the design and engineering of mixed reality and TV studios to the project, while PLAZAMEDIA contributes its extensive know-how as a broadcast service provider. The goal of the collaboration, which will last several months, is to adapt and optimize the complex mixed reality technology, which is becoming increasingly important in the film industry, in a way that is practical for TV productions. This will result in new applications, innovative graphic content, forward-looking lighting concepts and technical integrations, which will be used in pilot projects as a first step.

ARRI, as a leading provider of camera and lighting systems as well as holistic solutions for the global film and television industry, contributes basic technologies (sync, color calibration, metadata, lighting integration, lens measurements, etc.), system integration in the studio and an international network in regard to specialized partners.

PLAZAMEDIA, as a full-service broadcast provider in the field of sports production, entertainment and events, contributes its expertise as a studio producer and established content producer in the areas of augmented reality and virtual production, as well as in workflow development, conception and realization of projects. In addition, PLAZAMEDIA provides Europe’s most modern, IP-based broadcast center with its freely scalable technology infrastructure for the project with ARRI.

The integration of further partners – including technology manufacturers, IT companies, directors and universities – will expand the exchange of experts directly on the object in the Ismaning studio.

State-of-the-art environment: This is how the new mixed reality studio is equipped
The mixed reality installation in PLAZAMEDIA's Studio 6 at AGROB Medienpark in Ismaning, north of Munich and in the immediate vicinity of ARRI Rental, offers an area of 360 sqm and a height of seven meters. Integrated is a 120 sqm ROE Visual Diamond 2.6 LED wall with a length of 23 meters and a height of five meters. In addition, the studio is equipped with Mo-Sys Star Tracker System and Trackmen tracking system, has embedded the GhostFrame technology as optional tool, and as a graphic engine the Unreal Engine 4.27 developed by Epic Games.

Stephan Schenk, General Manager Global Sales & Solutions at ARRI: ”Together with PLAZAMEDIA, we are working on optimizing mixed reality for TV applications using ARRI’s camera and lighting systems. Already, we have all learned a lot. Now it’s a matter of further developing this fruitful cooperation and taking it to a new level.”

Jens Friedrichs, Chairman of the Management Board of PLAZAMEDIA GmbH: ”We have created a pilot project at the media capital Munich together with ARRI that is unique in this form and with which we want to set new standards for virtual applications. Many customers have already visited this mixed reality studio and some have expressed concrete interest in productions.”

From broadcasts to commercials to digital events: Mixed Reality Studio offers a wide range of possibilities for customers from different sectors
The use of mixed reality is ideal for media companies as well as for the advertising industry and the event and culture sector, which can realize their productions and events in a state-of-the-art environment.

In the broadcast area, both live and non-live formats can be realized, such as talk shows, magazines, sports broadcasts, esports shows, game and quiz shows, as well as TV links and moderation for various formats. In addition, classic film production and TV series/soaps as well as commercial film productions and on-air promotions can be implemented. An innovative mixed reality studio would also provide an optimal stage for music videos and concert livestreams, digital events, press conferences, photo shoots and social media content.

About ARRI “Inspiring images. Since 1917.” ARRI is a global player within the motion picture industry, employing around 1,200 staff worldwide. Named after its founders August Arnold and Robert Richter, ARRI was established in Munich, Germany, where the headquarters is still located today. Other subsidiaries are in Europe, North and South America, Asia, and Australia.

About PLAZAMEDIA GmbH: Leading provider of smart content solutions
PLAZAMEDIA, a Sport1 Medien AG company, has developed into a leading sports TV producer in the German-speaking region since its foundation in 1976. Today, with its roots in classic television production, PLAZAMEDIA is also an established provider of smart, digital content solutions for all media platforms. Its customers include not only public and private broadcasters, but also platform operators, international sports associations, agencies for sports rights and national and international companies.