3ALITY Digital and ARRI Media Join Forces in the UK 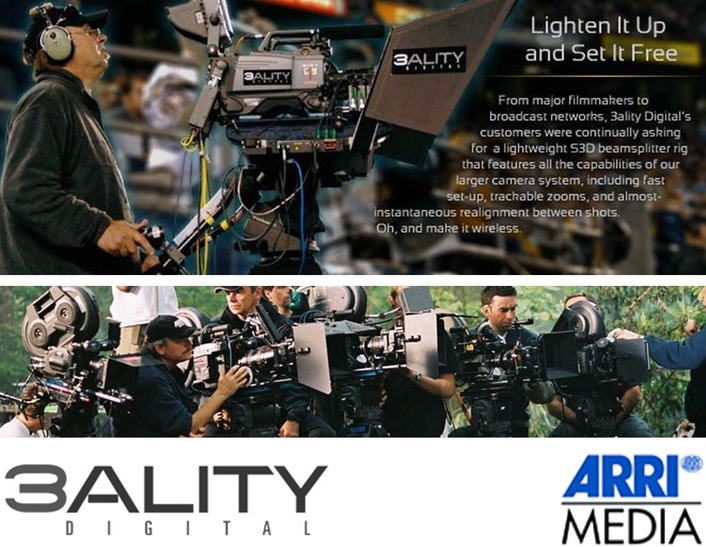 The deal will allow ARRI Media to supply 3ality Digital active S3D shooting systems to TV, commercial and feature film customers. The new partnership will expand equipment availability, as 3ality Digital’s systems will be on hand to rent direct from ARRI Media’s London and Manchester bases.

Content producers will also be able to demo or test the systems in one of the six ARRI Media test rooms, located at its offices in Uxbridge, Middlesex. There they can gain familiarity with 3ality Digital’s leading technology and ensure that its performance meets all of their image acquisition and schedule requirements.

In addition to renting equipment, the agreement will also see ARRI Media acting as the UK service centre for all of 3ality Digital’s products. Engineering experts will be on hand to carry out repairs, servicing and maintenance as well as providing spare parts.

Steve Schklair, CEO of 3ality Digital, said: “ARRI Media has over 20 years’ experience working closely with some of the biggest names in the UK’s film and TV industry, so they provide the perfect platform to expand the availability of 3ality Digital’s products. They fully understand advanced digital technologies, have industry recognised technicians and support and are the perfect partner for us on this side of the world. ARRI Media has a stellar reputation and we look forward to working closely with them”.

3ality Digital’s innovative camera rigs and stereoscopic processors are operated in live television broadcasts, commercials, feature films and episodic productions and the systems are already in regular use in the UK. Broadcast giant BSkyB uses 3ality Digital equipment as its primary source of content acquisition for its S3D HDTV satellite channel. 3ality Digital was also the technology behind BSkyB’s first landmark S3D broadcast, the Manchester United vs. Arsenal football game in January 2010.

Bill Lovell, Head of the Digital Department at ARRI Media said: “3ality Digital’s reputation for being the best in the 3D industry has been built on the quality of their products, which are at the heart of S3D. The company is capable of equipping at the highest level in the S3D world and together with ARRI Media’s camera and grip range, we will be able to provide customers with complete S3D production solutions”.

To inquire about renting 3ality Digital systems in Europe, please contact Bill Lovell, Head of Digital Department at ARRI Media, on + 44 (0)1895 457100 or blovell@arrimedia.com. For inquiries in the US, please contact Angela Wilson Gyetvan, vice president of Sales and Marketing at 3ality Digital on +1 818-333-3000 or angela.gyetvan@3alitydigital.com.