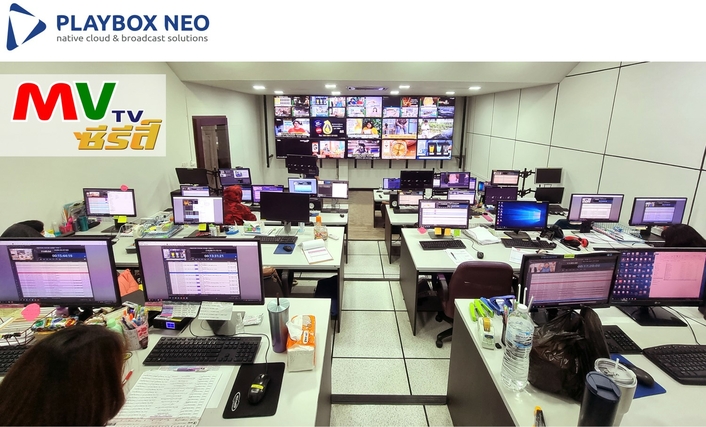 "We have been a PlayBox Neo customer for many years and decided now was the right time to upgrade all our PlayBox Neo systems to the latest Neo-20 version," says Worawut Tavipvoradech, MVTV CEO. "My colleagues find PlayBox Neo reliable and easy to operate, giving easy access to all the creative and process control facilities they need within a logical and eye-friendly user interface. The new Capture Suite ingest management system allows incoming content to be edited or transmitted before download is complete. That has the potential to save time and also allows us to compete strongly in our processing of late-breaking news. We have subscribed to 21 PlayBox Neo Annual Software Maintenance licenses across our network of workstations so that each operator has access to the latest production and playout tools."

A core element of the PlayBox Neo Channel-in-a-Box system, AirBox Neo-20 is a fully scalable playout engine which allows media files of various types to be combined in one playlist, including live inputs. It provides multiple SDI/IP streaming outputs simultaneously in all commonly used video standards at UHD, HD or SD resolution. Content can be trimmed, edited or repositioned at any time before playout. Changes to the playlist can also be made while on-air. Playlist scheduling can be performed hours, days or weeks in advance. Gaps and overlaps are automatically resolved to ensure continuous operation even when conflicting timed events are present. Special facilities ensure uninterrupted operation if content files or even entire schedules are missing or misplaced. Live production is supported by the ability to insert or trigger various events or live streams into the schedule. AirBox Neo-20 can be installed on-site under local control or accessed entirely via the cloud.

Capture Suite allows television station management staff to control, via a single graphic interface, multiple ingest channels spread across multiple servers. Functions such as input selection, ingest presets, file naming, file assignment and auto-transfer can be performed with a single click. It integrates closely with the PlayBox Neo Channel-in-a-Box or can be used standalone to support the production workflow at any media publishing house, post-production facility or playout service provider. External control can be performed directly from AirBox Neo-20 automation including the ability to assign time zones to each ingest instance for scheduled playout across specific regions.

TitleBox Neo-20 is a fully interactive 4K UHD/HD/SD graphics, titling and text display engine for use in broadcasting, education, hospitality and the wider business sector.  Designed to operate as a standalone hardware or software module, or as part of the PlayBox Neo system, it provides the tools needed to perform high-profile visual branding. Administrator-controlled templates can be deployed to maintain a consistent graphic theme. Creative features include unlimited layering of static and animated images, still or moving text, plus a wide range of digital video effects, under automated or live manual control. Dynamic data from external text feeds or an ODBC-compliant database can be linked to any text object and updated on-screen.