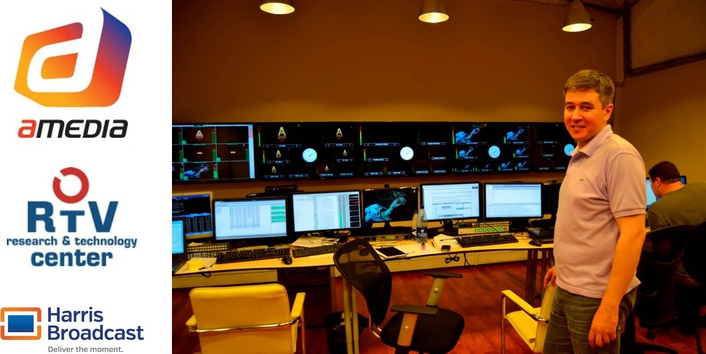 Versio™ and Selenio™ provide foundations of new file-based broadcast workflow at Moscow production facility
On May 31, Moscow-based Amedia, a leading Russian TV and Film production company, launched two channels in Russia: Amedia Premium and Amedia 1, both simulcasted in HD and SD.  The two new channels, along with the existing Amedia 2 channel, are distributed nationally through cable, satellite and IPTV operators.  To bring the new channels to air, Amedia is building a new broadcast production facility based on a bespoke Harris Broadcast file-based workflow solution.  On the project, Harris Broadcast is working closely with local systems integrator RTV RTC.

The first of its type in Russia, this project represents the largest single order worldwide for Harris Broadcast’s Versio™ integrated channel playout solution, which will enable Amedia to rapidly launch, sustain and protect their new channels and services.  The new facility incorporates nine Versio systems, providing full redundancy for the four channels plus one extra channel that supports preview functions throughout the broadcast production center.  With all branding, graphics and video server functions built into a cost-effective software-based 1RU platform, Versio provides everything that Amedia needs to get their new channels to air quickly, affordably and reliably.

Furthermore, Versio provides Amedia with market-leading video and audio quality, ease of use and system expansion capabilities.  On this demanding project, automation of the four channels plus the preview channel is achieved using Harris Broadcast’s ADC™ automated content management and distribution system running a list redundancy function to ensure complete on air reliability. 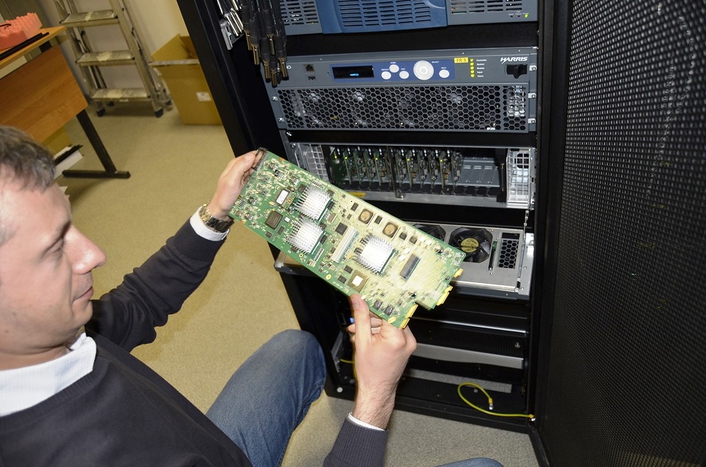 “The launch of Amedia’s pay TV channels, Amedia Premium and Amedia 1, is a key moment in development of a company as a leading broadcast service provider.  We searched for a technology company to achieve our goals and we have exceeded our expectations by working with Harris Broadcast and RTC RTV,” commented Igor Vernovsky, chief technology officer at Amedia.  “With products and systems such as Versio and Selenio, Harris Broadcast provides next generation broadcast capabilities at very affordable prices.  Its ability to supply a complete integrated workflow solution suite to our needs and resources also differentiates it from other technology providers.”

With a local sales and support office based in Moscow, Harris Broadcast has identified the potential for significant growth in the Russia/CIS (Commonwealth of Independent States) region for a number of years.  “We are delighted to have the opportunity to work with Amedia and demonstrate the potential that Harris Broadcast offers broadcasters in this dynamic regional market,” stated Mathias Eckert, vice president sales and service, Europe and Africa at Harris Broadcast.  “Russian television viewers will enjoy watching premium TV series and films in their homes and Amedia will appreciate the quality, performance and reliability that our workflow solution provides.”

About Amedia:
Amedia is one of the biggest Russian producers of television films, series and programs. Amedia was founded in 2002 by Russian producer Alexandеr Akopov, with Len Blavatnik, American industrialist and investor in a number of media and digital assets worldwide, joining as a senior partner in 2005. The company’s annual production volume is over 200 hours of content in various genres – dramas, mysteries, thrillers, romantic comedies and sitcoms. Amedia pioneered industrial methods of TV drama production in Russia and was the first to launch coproduction with major Hollywood studios. Romantic drama series "Poor Anastasia," the first project produced by the company, had great success in Russia and was sold to 25 countries across the world. The company has built a 40,000 square meters, 16- stage full-cycle production facility by renovating a former factory in the center of Moscow.

About Harris Broadcast
Harris Broadcast is an industry leader in delivering the most advanced, content-rich media experiences available for a wide spectrum of radio, television and private media networks around the globe.  With more than 25 leading brands including Versio™, Selenio™ and Maxiva™, the company enables media organizations to tap into one of the broadest, integrated product and solution portfolios in the industry. Headquartered in Denver, Colorado, the company is widely recognized for its product quality and reliability, engineering excellence and customer service, and has earned nearly 100 technological firsts and more than 50 awards for technical innovation.