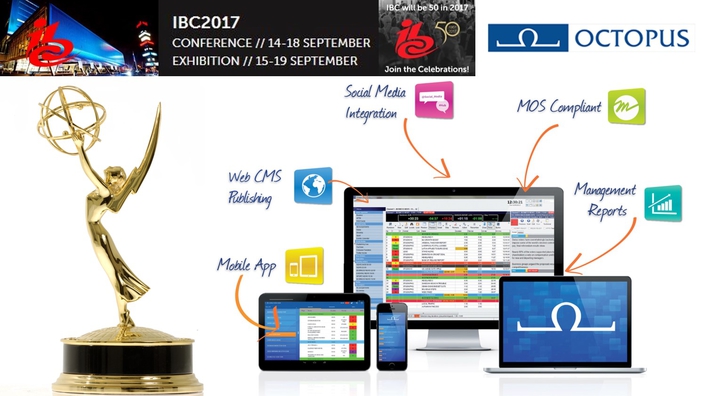 Octopus Newsroom will be celebrating at IBC2017 the award of an Emmy to the Media Object Server (MOS) Group of which it is a proud member. The presentation was made during the 68th Annual Technology & Engineering Emmy® Awards ceremony at The Bellagio Hotel in Las Vegas.

"MOS may sound like just another engineering term but it is one of the most useful developments in the entire history of newsroom computing," explains Octopus Newsroom's Senior Developer Martin Nedbal. "The MOS Communications Protocol gives newsroom computer system users the ability to integrate with third party systems such as graphics, automation, storage servers and teleprompters. Newsroom managers thus retain a high level of freedom to decide when and where they purchase production, post-production and data storage equipment. Careful design and co-ordination allow all essential newsroom tasks to be handled from a single workstation rather than having to clutter desks with multiple monitors and keyboards. MOS-standardised metadata exchange between these devices also allows fast content searching and seamless control across an entire production network."

"We are additionally celebrating at IBC a year of major newsroom system successes," adds Sales Director Gabriel Jankó. "These include Astro AWANI in Kuala Lumpur, CHEK-TV in British Columbia, Echo TV in Hungary, La Tele in Switzerland, NTD TV in Taiwan, SAT 1 Bayern in Bavaria, plus USA-based TheBlaze and VICE News. The past 12 months have also seen important reinforcements to the Octopus Newsroom management team with the promotion of Lukas Kotek to Chief Technology Officer and the appointment of Gianluca Bertuzzi as Sales Manager for Africa & Latin America. This year we have achieved tighter integration than ever between Octopus 8 and products from other members of the Emmy awarded group, including Avid, ChyronHego, Grass Valley, SAM, ToolsOnAir and Vizrt. That gives our customers the freedom to integrate Octopus with their existing graphics, asset management, archiving and playout investments rather than obliging them to buy an entire extra support system simply to service their newsroom. A complete Octopus 8 system will be demonstrated on our IBC stand, G38 in Hall 7."