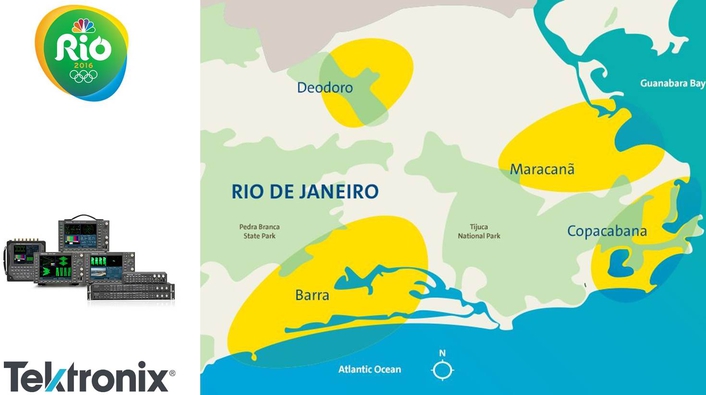 NBC Olympics, a division of the NBC Sports Group, has selected Tektronix to provide audio and video test and quality monitoring equipment for its production of the Games of the XXXI Olympiad, which take place in Rio de Janeiro, Brazil, from August 5 - August 21. The announcement was made today by Terry Adams, Vice President, IBC Engineering, NBC Olympics and Charlie Dunn, general manager, Video Product Line, Tektronix.

The complexity of producing coverage of the Olympic Games requires test and monitoring solutions with the highest level of performance, and reliability in order to ensure high-quality content is being delivered to viewers. To this end, NBC Olympics will use Tektronix WFM7200, WVR7200, WFM5200, and WVR5200 Waveform Monitors and Rasterizers, SPG8000A Master Sync and Master Clock Reference Generators, and Sentry Video Quality Monitors to support its coverage of the Rio Games. The equipment will be used to monitor and test the quality of video and audio content used in NBC Olympics’ production, post production, transmission and distribution workflows of NBC facilities for the Games. For UHD applications, NBC will use the WFM8300 Waveform Monitor which supports numerous UHD formats and ITU-R BT.2020 wide color gamut (WCG).

“We’re thrilled that NBC has selected Tektronix as its premier test and quality monitoring solutions provider for its coverage of the 2016 Olympic Games,” Dunn said. “Events like the Olympics where every second counts require the best test and measurement equipment available to optimize and maintain the quality of content and continuity of service. Using advanced video monitoring and measurement solutions from Tektronix, NBC Olympics can be confident that it will be delivering the highest quality of experience possible to its viewers.”

“NBC has been utilizing Tektronix products for its coverage of the last eight Olympic Games,” said Adams.  “While that’s most always been focused on sync generation and waveform monitoring, and a large part still is, the need for Transport Stream monitoring has grown exponentially in the past several Games. We will be utilizing 12 of the Sentry units located across the country to monitor the hundreds of live production and distribution streams generated in Rio.  Tektronix has incorporated many new features based on requirements we identified during our coverage of the London and Rio Games. With the help of Tektronix, we look forward to another successful NBC Olympics presentation of the Games.”

The Tektronix waveform monitors and rasterizers will be used by NBC Olympics to monitor the full spectrum of video and audio formats. The models selected by NBC feature extensive display versatility and usability, along with full-featured audio monitoring capabilities, including audio loudness monitoring, and high-performance eye and jitter physical layer measurements. The instruments will be used for quality monitoring and compliance checking during content distribution and broadcast transmission and for quality control in content production and post-production. The units will also be used for equipment qualification and troubleshooting during installation and maintenance of the facilities at the Games.

The Tektronix SPG8000A Master Sync and Master Clock Reference Generators will be used by NBC Olympics to ensure stable and reliable timing and synchronization source to be available for mobile, studio, post production, and broadcast operations at the Games. The instruments provide multiple video and audio reference signals and 3G/HD-SDI  test patterns for video equipment verification, facility link testing and display calibration. The SPG8000A units are also equipped with IEEE 1588 Precision Time Protocol (PTP) support which offers solutions for system timing over IP for a gradual transition to hybrid SDI-based and IP-based infrastructure.

The Sentry Video Quality Monitors will be used by NBC Olympics to provide real-time Quality of Experience monitoring of its coverage of the Games, and to ensure the quality of the video transport back to the United States.
A division of the NBC Sports Group, NBC Olympics is responsible for producing, programming and promoting NBCUniversal's Olympic coverage. It is renowned for its unsurpassed Olympic heritage, award-winning production, and ability to aggregate the largest audiences in U.S. television history.

About NBC Olympics
NBC, “America's Olympic Network,” owns the exclusive U.S. media rights to the Olympic Games, television’s most powerful property, through 2012, which includes Beijing in 2008, Vancouver in 2010 and London in 2012. From August 8-24, 2008 NBC Universal will present an unprecedented 3,600 hours of coverage, highlighted by NBC in primetime with live swimming, gymnastics and beach volleyball. In August 2004, 203 million viewers watched as the networks of NBC Universal—NBC, MSNBC, CNBC, USA, Bravo, Telemundo, and NBC’s HD affiliates—offered a then record 1,210 hours of Olympic coverage from Athens. For additional information, go to NBCOlympics.com, a year-round destination for fans of Olympic sports, featuring news, Beijing previews, athlete features, expert blogs, photos, Olympic video from the NBC archives and social tools enabling users to build communities around their favorite sports, post comments and blogs.

About Tektronix
Headquartered in Beaverton, Oregon, Tektronix delivers innovative, precise and easy-to-operate test, measurement and monitoring solutions that solve problems, unlock insights and drive discovery. Tektronix has been at the forefront of the digital age for over 70 years.