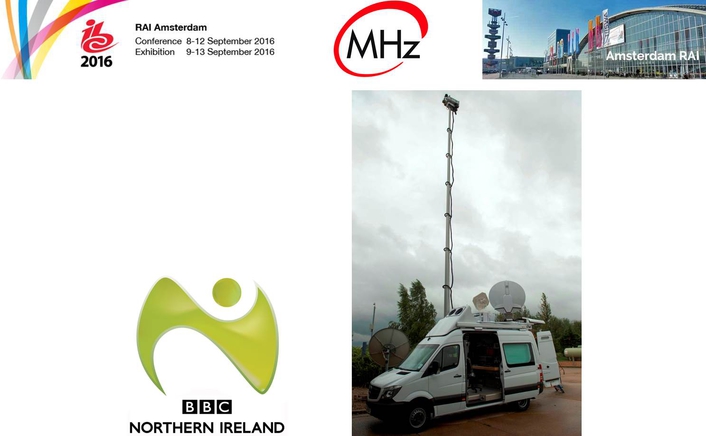 Robust truck, built for demanding environments, is one of 37 vehicles supplied by Megahertz as part of the BBC framework for the provision of Live Broadcast Vehicles

Megahertz Ltd, the trusted partner for systems integration with years of experience in delivering cost effective, imaginative designs and solutions for fixed and mobile applications, today announced that it will be showcasing a fully featured news production truck that will be delivered to BBC Northern Ireland (BBC NI) after its appearance on the company’s IBC show stand 12.F20.

This will be the first showing of this vehicle to the broadcast industry and to IBC visitors, who will have a chance to explore the Mercedes Benz Sprinter DSNG truck during the show.

The truck is one of 37 vehicles that have been delivered by Megahertz to the public broadcaster over the last two years, when the BBC framework for the provision of Live Broadcast Vehicles was put in place. As part of that order, the systems integrator is delivering two of these ‘Type 3’ vehicles to BBC NI, one of which will be at the show.

Predominantly the trucks will be used for BBC NI Newsgathering, but they will also cover sporting and other general broadcasting events across the United Kingdom, and occasionally in Europe. They have each been designed to provide all the facilities necessary to support these Outside Broadcasts within the limitations of the space and payload available.

“As with all the vehicles we build, we endeavour to fit the maximum amount of equipment into the space and weight capacity that’s available. For the particular vehicle that we’re showcasing at IBC, our aim was to install the largest main satellite antenna possible, as BBC NI operates closer towards the edge of the satellite footprint than the other English regions vehicles we’ve equipped in the past,” explained Steve Burgess, Technical Director at Megahertz.

The new truck is built on a 5.3 tonnes chassis and has a 1.6m AvL Technologies SNG antenna mounted on the roof, which operates on the Ku band frequency and can receive and transmit HD video signals. The broadcast technology equipment on board the truck includes Evertz SPGs, a Blackmagic Design Atem vision mixer and a Snell Advanced Media (SAM) 96-port router, all connected with Crystal Vision glue.

“In addition, we made optimum use of the space on the roof to accommodate the mast, generator radiator, air-conditioning and off-air satellite dish, all on a medium wheelbase vehicle, and within the weight limit for the roof. Close attention had to be paid to the centre of gravity of the vehicle, which must not exceed the limits set by Mercedes.”

The truck is fitted with an on-board 12kVA Fischer Panda generator, comprising a compact and super silent three-cylinder diesel engine, which powers the vehicles for all their broadcast operations. Also on board are two 400W amplifiers in a fully redundant configuration.

The new vehicle will be delivered to Northern Ireland as part of a full turnkey Megahertz service that included design, coach building, installation and commissioning.

About Megahertz
Megahertz designs, engineers and delivers turnkey systems to the world’s leading broadcasters, content owners and media service providers. As a leading systems integrator, its expert team of skilled engineers and solutions architects, drawn from both broadcast and IT backgrounds, ensures a creative, forward-thinking, independent and highly efficient approach. Megahertz provides dynamic and resilient systems for news and sport production, state-of-the-art studios and advanced file-based workflows, as well as fully equipped vehicles for outside broadcast and newsgathering. The company also provides consultancy, training and support services. The company has two UK locations, including an international sales office close to London Heathrow Airport and a 2000 square metre engineering facility. This allows Megahertz to carry out its own coachwork for vehicles and to pre-fabricate even the largest systems. With a reputation for excellence since 1982, Megahertz continues to deliver value-added engineering solutions worldwide.

BBC Northern Ireland provides a broad range of programmes and services, across radio, television and online, for BBC audiences at home and throughout the rest of the UK.

Our main base is Broadcasting House in Belfast. Some of our programme-making staff are also based in Blackstaff House and this is home to our largest television studio in Northern Ireland. We broadcast to audiences in the North-West from BBC Radio Foyle in Londonderry.

BBC Northern Ireland employs approximately 650 staff. They are involved in all aspects of programme-making and production and include journalists, technicians, engineers and staff involved in a range of support roles. A significant % of BBC output on local television, and to a lesser extent on BBC radio, is sourced from the independent sector – providing additional employment and helping to sustain the creative industries in Northern Ireland.

Our aim is to provide something of value for everyone – to inform and stimulate debate, to celebrate cultural life and diversity, to describe and explain stories, issues and events involving local people, and to provide memorable viewing and listening experiences for audiences in Northern Ireland and throughout the rest of the UK.