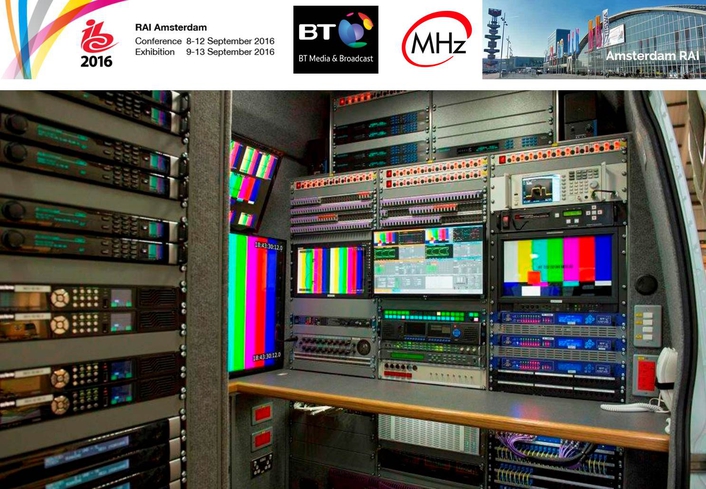 Megahertz Ltd. (IBC stand 12.F20), a leading systems integrator and mobile broadcast specialist has announced that it has delivered a new hybrid fibre and satellite UHD links truck to BT TVOB, the outside broadcast arm of BT Media & Broadcast. The new truck (known as TES52), will be showcased on BT Media & Broadcast stand in the outside broadcast space at IBC2016 (stand O.C01). It is the first truck in the UK with the ability to transmit HD and UHD/4K via fibre and satellite simultaneously.

Prior to IBC, TES52 will cover the first Premiership match of the 2016/17 season, supporting customers by providing 14 HD outbound visions (as 1080i and 1080p) simultaneously. Later on this year, it will be deployed in UHD/4K mode providing up to 3 UHD visions on fibre and one on satellite. The truck will be in constant use until it appears at IBC.

Megahertz’s design team worked closely with BT TVOB engineers to provide a powerful and flexible UHD vehicle that is capable of transmitting pictures both through its roof-mounted, Ku-band, satellite antenna and via BT’s own fibre network, which connects over 150 major sports venues and news outlets across the UK.

TES52 is a step up from TES51 UHD truck that Megahertz also built in 2014, offering greater encoding capability. It is also fitted with two 750W amplifiers and built on a 7T Iveco Daily chassis.

“We’re incredibly proud to be at the forefront of UHD and 4K live events broadcasting in Europe,” said Neil Huggins, senior product manager at BT Media and Broadcast. 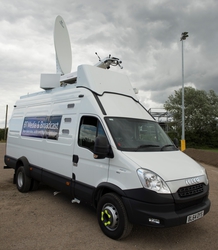 “The capability that TES52 has to deliver in HD and UHD/4K via both fibre and satellite could not have been achieved so lucidly without our solid partnership with Megahertz. They consistently deliver flexible, rugged and timely solutions that truly address our customers’ current and future requirements. Megahertz has played a big part in our ability to stay ahead of the game when it comes to industry technology transitions.”

BT TVOB provides a delivery service from all the major sporting and event locations in the UK, via fibre and satellite, to broadcasters and production company headquarters. The BT truck will sit alongside the outside broadcast production vehicle, accepting multiple feeds which are then compressed, multiplexed and fed to the broadcaster via the BT Tower in London. At each point, including the input and outputs of the link truck, careful quality monitoring will take place to ensure that the signal arrives in excellent condition.

The newly configured vehicle can be seen as part of the Megahertz presence at IBC2016 and will demonstrate how live Ultra HD/4K content passes through the vehicle. A formal presentation on the design and build of TES52 will take place on the BT stand O.C01. Additional information can be sought from the Megahertz team on stand 12.F20.

About Megahertz
Megahertz designs, engineers and delivers turnkey systems to the world’s leading broadcasters, content owners and media service providers. As a leading systems integrator, its expert team of skilled engineers and solutions architects, drawn from both broadcast and IT backgrounds, ensures a creative, forward-thinking, independent and highly efficient approach. Megahertz provides dynamic and resilient systems for news and sport production, state-of-the-art studios and advanced file-based workflows, as well as fully equipped vehicles for outside broadcast and newsgathering. The company also provides consultancy, training and support services. The company has two UK locations, including an international sales office close to London Heathrow Airport and a 2000 square metre engineering facility. This allows Megahertz to carry out its own coachwork for vehicles and to pre-fabricate even the largest systems. With a reputation for excellence since 1982, Megahertz continues to deliver value-added engineering solutions worldwide.