Media Links Redefines the Network: Introduces “Studio Without Limits – Now Everything is Local”

Media Links, a 2014 Technology and Engineering Emmy® Award winner and the market leader in media over IP transport solutions is debuting powerful new solutions that revolutionize the connectivity and distribution of content within studios & broadcast facilities with outside transport networks, remote productions and distance venues, creating a truly seamless and integrated content transport concept.

At NAB 2016, booth SU4721, Media Links will unveil a series of new products that eliminate the boundaries that occur between local area networks (LAN) inside a typical broadcast facility and external wide area content distribution networks (WAN). The result for broadcasters is a studio without limits, where all content can be controlled as if it were local.

Media Links has been at the forefront of providing solutions for the mission-critical transport of IP-based media & video, and media leaders around the globe rely on its solutions for the most advanced remote & live applications that maximize bandwidth utilization, and optimize network usage to move content between locations, studios, distribution networks, and across the world. 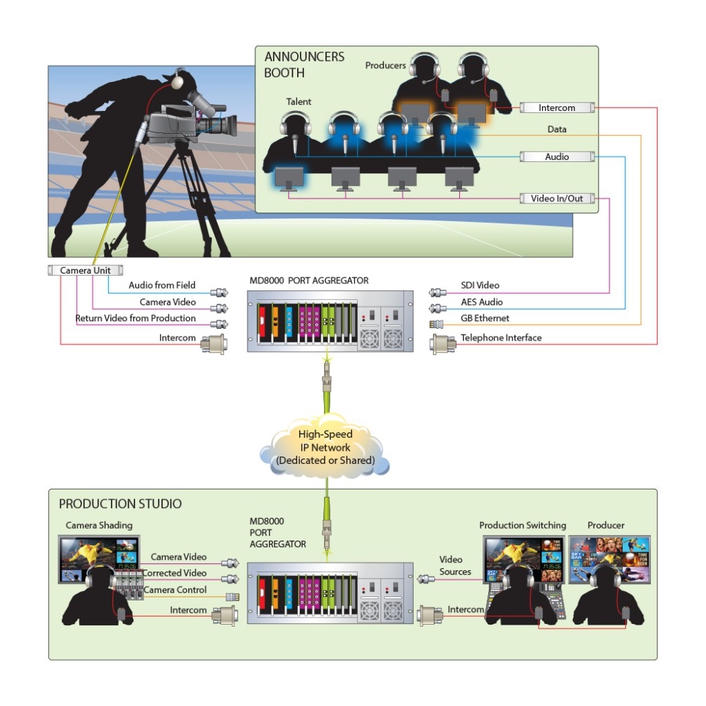 MDX 4090 - COTS-based IP Video Router delivers the next generation of IP media routing using commodity off the shelf components that improve cost efficiencies while being flexible and powerful. Optimized for use in media switching environments where bandwidth management, quality of service and deterministic timing are critical, the MDX 4090 incorporates Media Links’ Media Rapid Flow™ protocol for SDN channel switching that is 100 times faster than typical IT-based data protocols like OpenFlow. Up to 96 non-blocking 10GbE as well as four 40GbE ports in a 2RU chassis with hot pluggable power supplies and fan units are supported.

MDP 3010 - IP to J2K Decoder offers pristine quality and high-speed IP to JPEG2000 processing in a compact, portable and rugged footprint, which meets the challenges of high-end broadcast applications or simple IP-based network applications, where space and cabling requirements are restricted. It receives IP packets that contain a JPEG2000 compressed stream through a 1GbE network interface and reproduces them into simultaneous SDI and HDMI video outputs.

“Our vision at Media Links is to leverage our 20+ years of video-over-IP experience to break down the barriers that separate external transport networks and “in studio” or broadcast center routing and distribution,” said Tom Canavan, President of Media Links Inc. “This will create a seamless network based on our Media Defined Networking™ technology, including the next generation of IP routing, SDN concepts, and fast switching, all monitored and controlled by an industry-leading software platform.”

About Media Links
Founded in 1993 with its headquarters in Kawasaki, Japan, Media Global Links Co., Ltd. is a leading developer and manufacturer of broadcast network infrastructure and media transport solutions. Media Links is the umbrella brand name supported by Media Global Links in Japan, Media Links Inc. in Connecticut, USA, Media Links EMEA in the UK and ML AU Pty Ltd. in Australia. The Company’s mission is to offer broadcasters and network providers throughout the world leading edge technology, enabling them to economically transport the complete suite of content signals – 4K, HD/SD video, audio or data - onto their multi-service IP/Ethernet networks. Operating as a pioneer at the forefront of technological innovations and advancements, Media Links provides the only standards based product suite in the market that enables the adoption of media signal types to Telecom standards (IP, Ethernet, SDH, SONET). In 2014, Media Links was awarded a Technology and Engineering Emmy® Award for Standardization and Productization of JPEG2000 (J2K) Interoperability. Media Global Link’s common stock is listed and traded on the JASDAQ Market of the Tokyo Stock Exchange under the Security Code Number 6659.