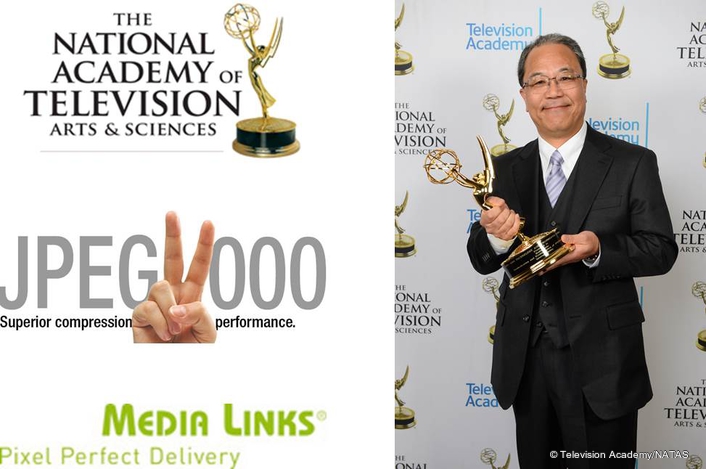 "To receive this award is a great honor for us, and we are thrilled to have been recognized by our peers and the Academy of Television Arts & Sciences for technical leadership in the media industry," comments Takatsugo Ono, Chairman & CEO of Media Global Links. "This recognition validates our pioneering work in JPEG2000 standardization for developing best in class video over IP transport solutions. We would also like to congratulate our fellow award recipients on their remarkable achievements."

The Technology & Engineering Emmy® Awards are presented by NATAS to individuals, companies, or to scientific or technical organizations in recognition of significant developments and contributions to the technological and engineering aspects of television.

Through its pioneering work with the Video Services Forum (VSF), Media Links has been involved in aiding the widespread adoption of JPEG2000 as an interoperable and open compression standard for transmitting high quality content over IP with minimal latency.

About Media Links
Media Links is the umbrella brand name supported by Media Global Links, Japan, Media Links Inc., USA, Media Links Systems, Germany and ML AU Pty Ltd., Australia. Founded in 1993 with its headquarters in Kawasaki, Japan, Media Global Links Co., Ltd. (MGL) is a leading developer and manufacturer of broadcast network infrastructure and media transport solutions. Its mission is to offer broadcasters and network providers throughout the world leading edge technology, enabling them to economically convert and move the complete suite of broadcast signals - whether video, audio or data - onto their multi-service IP/Ethernet networks. Operating as a pioneer at the forefront of technological innovations and advancements, MGL provides the only standards based product suite in the market that enables the adoption of media signal types to Telecommunication standards like Ethernet, IP, SDH and SONET.

About The National Academy of Television Arts & Sciences
The National Academy of Television Arts & Sciences (NATAS) is a professional service organization dedicated to the advancement of the arts and sciences of television and the promotion of creative leadership for artistic, educational and technical achievements within the television industry. It recognizes excellence in television with the coveted Emmy® Award for News & Documentary, Sports, Daytime Entertainment, Daytime Creative Arts & Entertainment, Public & Community Service, and Technology & Engineering. NATAS membership consists of over 13,000 broadcast and media professionals represented in 19 regional chapters across the country. Beyond awards, NATAS has extensive educational programs including Regional Student Television and its Student Award for Excellence for outstanding journalistic work by high school students, as well as scholarships, publications, and major activities for both industry professionals and the viewing public.