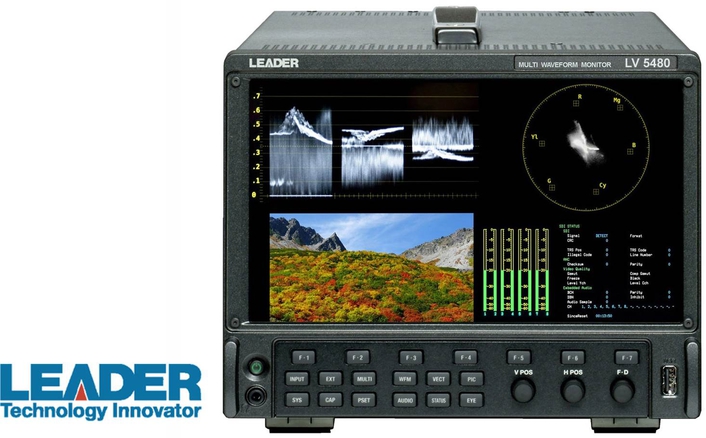 LEADER announces a special promotional initiative designed to increase customer access to its range of test and measurement products. This promotion is available on all the company's products and reduces the cost of renting LEADER equipment from its distributors, preferred dealers and system integrators.

"2016 is a major sporting year, including the Rio Olympics and UEFA European Football Championships," comments European Regional Development Manager Kelvin Salvidge. "The resultant pressure on mobile broadcast services puts rental companies in a dilemma when it comes to investing in test and measurement equipment to support their customers at these events. Do they simply purchase more HD equipment and ignore the growing demand for 3840 x 2160 UHD? Or do they protect their investment by selecting products which can be upgraded at any time to UHD?

Based on the award-winning LV 5490, the LV 5480 is a multi-format waveform monitor capable of displaying and evaluating signals from up to four 3G-SDI input channels simultaneously. The LV 5480 provides the features needed for HD shooting, post-production and technical support. These include waveform, vector and picture monitoring, an event log, data dump and four-channel timing display. An SDI signal status facility looks for cyclic-redundancy-check errors and embedded-audio errors. The LV 5480 can be upgraded quickly and easily to the full 4K feature set of the LV 5490, including 4K pattern generator, eye pattern and digital audio card.

The LEADER LV 7390 is a 3G/HD/SD-SDI rasterizer which can be used to measure up to four source channels simultaneously. It occupies just 1U and can be deployed for desktop or rack-mounted operation. Designed for easy connection into 3G-SDI, HD-SDI and SD-SDI systems, the LV 7390 incorporates full-resolution 3G/HD-SDI and DVI-I rasterized outputs which allow detailed video and audio parameters be checked on a separate monitor in full 1920 x 1080 HD resolution. Measurements can be displayed as waveform, vector, picture, audio and SDI status. Display layout is user customisable from a wide range of available settings including individual full screen or user-defined combinations. These settings can be configured from the front panel or via a standard USB pointing device and then saved for fast recall. 60 user-definable presets are accessible. These can be labeled and displayed on-screen. A reference marker can be placed at any position on the rasterized image.

LEADER Electronics Europe Corporation
LEADER produces high-precision test instruments that are reliable, easy to use, compact, and accountant-friendly. LEADER innovations include the world's first 4K waveform monitor (the award-winning LV 5490) plus the intuitive CINELITE® and CINEZONE® monitoring tools which allow creatives to make optimal use of available dynamic range and luminance.
Re-established in 2015 by LEADER Electronics (Yokohama, Japan), LEADER Electronics Europe Corporation provides customer support, sales and marketing services both for LEADER and a select number of high-technology manufacturers with specific focus on the broadcast and professional video market.
LEADER Europe operates a fast, efficient and highly experienced sales and support channel. LEADER Europe has offices with local representation in the UK and an extensive channel partner network across Europe, providing pre-sales and post-sales service and support.