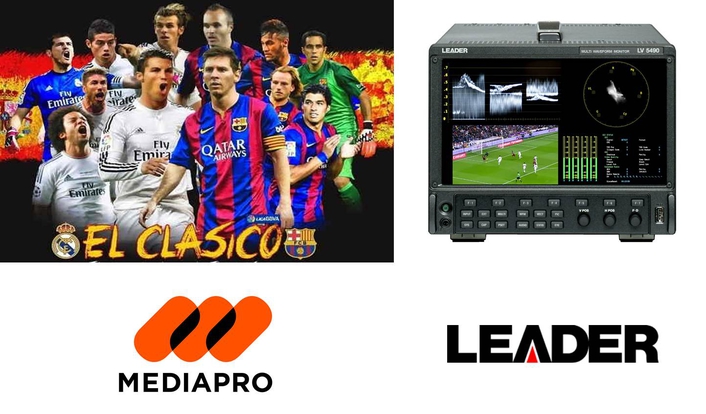 "This was a milestone event in terms of sports broadcasting," says Jordi Rubio Gimeno, Manager of Media Burst. We premiered a brand new mobile production vehicle equipped specifically for UHD. Shooting in 4K enabled us to capture the action in four times the detail possible in high definition. It also provided a basis for extraordinarily high quality HD downconversions. The LV 5490 instruments provided exactly the features we needed to maintain the maximum possible signal quality across the incoming feeds from 12 full broadcast standard UHD cameras."

The LEADER LV 5490 is a highly versatile waveform monitor supporting the full range of standard video production and transmission resolutions from 525 and 625 standard definition up to 3840 x 2160 and 4096 x 2160 4K ultra-high definition. It incorporates a 1920 x 1080 9 inch LCD monitor with a wide viewing angle and high quality colorimetry. This allows simultaneous analysis of up to four video channels. The instrument's 4K capability is particularly useful to people working with latest generation cameras, whether for digital cinematography or high-end broadcast applications.

Equipped with eight input connectors, the LV 5490 accepts up to two 4K signals simultaneously. In the 4K video format mode, 3G-SDI dual link or quad link is supported. Up to four 3G-SDI dual link 4K video inputs or up to two 3G-SDI quad link 4K video inputs can be selected for display, or two sets of HD-SDI dual link signals. In the SDI mode, up to four signals can be displayed simultaneously. The LV 5490 is also equipped to handle video signals via two-sample interleave as well as square division. Two-sample interleave is the approved standard for 4K.

The LV 5490 can be operated in a very wide selection of test and measurement roles. These include waveform, vector, picture monitoring, SDI signal status (which looks for cyclic-redundancy-check errors and embedded-audio errors), an event log, data dump and four-channel timing display. Waveform, vector and picture can be viewed simultaneously on the LV 5490 screen. Simultaneous display and overlay display of multiple SDI inputs is possible. Size and location of individual channel displays can be adjusted using a USB mouse. The LV5490 can also be controlled remotely using standard KVM tools.

In addition to its video test and measurement capabilities, the LEADER LV 5490 incorporates a versatile selection of audio monitoring and analysis tools, which are available with the Digital Audio option. These include 4 x 4 channels of SDI audio de-embedding, lissajous display, surround-sound display and volumetric display. Up to 16 channels of de-embedded SDI audio can be displayed on screen and output as discrete AES3 feeds.

Eye pattern, including jitter waveform display and Dolby decoding, can be ordered as optional facilities along with a CIE 1931/1976 color space chart which can display BT.709, DCI (P2) plus BT.2020 (the 4K standard's full ITU recommended color space).

LV5490 operators can adjust the size of up to four displays on the screen to suit specific tasks. This allows easy magnification and inspection of detail on the instrument's 9 inch 1920 x 1080 LCD screen instead of being limited to fixed size quadrants. The LV5490 also comes with a 1920 x 1080 HD DVI and HD-SDI rasterized output for display on a larger monitor.

Mediapro
Mediapro is part of Imagina Group, one of the most important audiovisual groups in Europe. With over 60 companies is the leading European company in audiovisual content and unique in its integration of content with production and distribution services.

LEADER Instruments Corporation
LEADER produces high-precision test instruments that are reliable, easy to use, compact, and accountant-friendly. LEADER innovations include the world's first 4K waveform monitor (the award-winning LV 5490) plus the intuitive Cinelite® and Cinezone® monitoring tools which allow creatives to make optimal use of available dynamic range and luminance.