The all-new 53 foot expando will be capable of sports and entertainment productions using up to 14 4K/UHD cameras. By making it practical to produce in 4K, this will be a major boost for the delivery of live 4K content to the home. 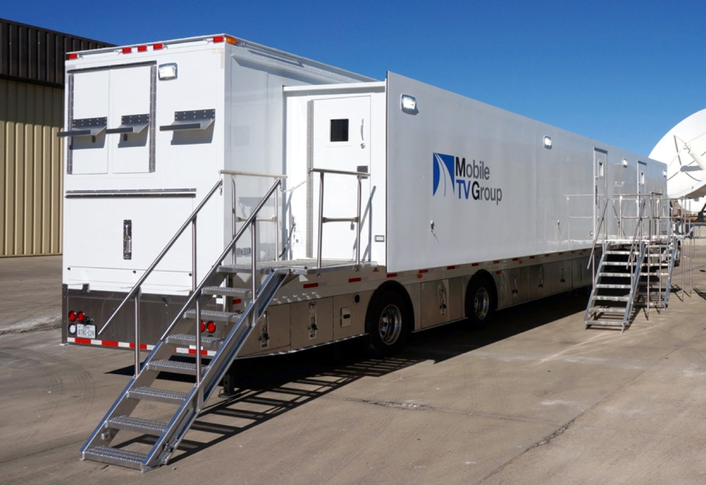 "The time has come for a true 4K mobile unit," says Philip Garvin, co-owner and General Manager of MTVG, one of the two largest mobile unit facilities companies. "The technology we need to build it is now available, or will be by mid-2015. Walk into any electronics retailer and you’ll see 4K sets everywhere and at least one of the major distributors (MVPD) has announced that it will be offering 4K to its subscribers next year. Our new truck will help to fill those screens with stunning images."

In development since last May, the first 4K mobile unit will be ready for its first production in mid-to-late 2015, and MTVG is accepting bookings now. Potential users will be able to tour the 'work-in-progress' unit at the Gerling booth (OE601) in the NAB outdoor exhibit area between the Central and South Halls.

Other equipment on the mobile unit will include Grass Valley 4K/UHD 2/3 inch cameras and K-Frame/Kayenne 4K switcher, a Calrec Artemis mixer and Kaleido multiviewers. A networked-configured Dyno/K2 4K replay system as well as EVS and Evertz replay systems will be demonstrated on the truck at NAB. The trailer chassis was built by Gerling & Associates and finished and integrated by Colorado Studios.

"At MTVG we consider it to be our job to introduce new technology that will arm our clients with the innovations and workflow to give the fans at home the best viewing experience,"  Philip Garvin continues. "It is natural for us to be spearheading the next production format. With this and future 4K trucks we will make it routine to produce in 4K as well as HD."

"We are very pleased to be co-operating in this very innovative venture," adds Tommy Goodson, Leader Instruments Corporation Business Development Manager. "The LV5490 has proved highly successful since its first showing at NAB 2013 and is being used by some of the largest post-production facilities in the USA. It is also being employed successfully in the broadcast sector as high-end public-service channels prepare for the 4K future."