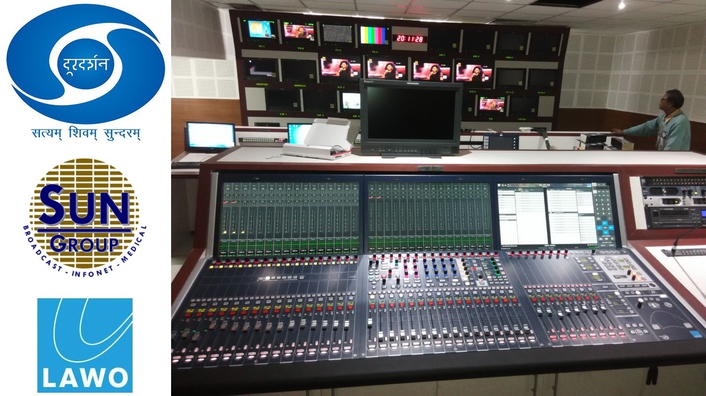 As India’s largest broadcast operation, Doordarshan (DD) reaches around 92% of the population and 81% of its territory. Government-funded, it is also the largest terrestrial network in the world, and among the largest in terms of studios and transmitters with more than 90 studios and relay stations spread across the Indian subcontinent. In keeping with this standing, Doordarshan does not make equipment investments lightly, as was seen when it included Lawo mixing technology in a recent TV news studio upgrade at its New Delhi broadcast center.

Systems integration for the Doordarshan Central Production Centre (CPC) project is being handled by Sun Broadcast, and has introduced the broadcaster to German technical innovator, Lawo.

“We won the tender with a 40-fader mc²36 with 96+96 DSP channels – the first mc² series mixing console in DD,” confirms Tan Boon Siong, Lawo Sales Director for SE Asia. “As well as price, we won on our ability to meet all the technical requirements laid down by Doordarshan.”

Planning for the work began in mid-2015, with the contract awarded 12 months later. The console order was placed with Lawo in October 2016. Presently, the installation is well underway with completion of commissioning set for the end of March.

Providing national, regional and local programming, Doordarshan currently operates around 21 channels including DD News, DD National, DD Sport and DD Bharati. The refurbished studio will provide fully integrated operation with new and more advanced technology for DD News than DD has previously has at its disposal.

Key to the selection of the mc²36 mixing system for the project was Lawo’s product reputation, customer support and German build quality. “We have complied with all the technical requirements of the studio design technical team,” says Tan Boon Siong. “Now the installation is nearly complete, with parameter verification, performance testing expected to take one year for the approval process.”