Thirty years in Los Angeles has done nothing to modify Mark Rudge’s lilting Birmingham accent. The director of automated and theatrical lighting with Illumination Dynamics is also a big hit at parties and open houses with his custom-built, trailered, wood-burning barbecue. Now in his 10th year with ID (the company’s welcome acronym), Rudge has helped make them a leading player in the growing reality TV market.

Through a close association with double Emmy® award-winning lighting designer Oscar Dominguez, their equipment is seen on The Voice, Shark Tank, The Bachelor and Bachelorette, 500 Questions and the Red Nose Day Special. Meeting the needs of the design and making the right purchasing decisions for the rental department is a constant challenge. “When we started this division, we had 200 tungsten Source Four Lekos and about the same number of Source Four PARs,” recalls Rudge. “Many of these disintegrated on tropical beaches during Bachelor shoots. At the same time, the demand for tungsten was dropping off, so we ventured into buying LED.” 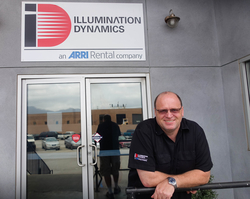 An initial purchase of 75 ETC Source Four LED Series 2 Lustr® and 24 ETC Source Four® LED Series 2 Daylight HD fixtures was not enough, and according to sales and rental agent George Avalos: “We have around 150 Daylight HD units and they just fly out the door. We have found that the Daylight HD fixture is a great all-arounder and can be dialed down to tungsten temperature more efficiently than pushing the tungsten fixture up to daylight.” Anticipating the needs of high-end lighting designers and directors of photography, their Source Four rentals include EDLT lenses as standard equipment.

Rudge’s long association with ETC goes back to his early days with Keylight, the Olesen Company and California Stage and Lighting. “I like the way ETC provides real manuals, written in a way our customers can understand. In the rental business, that is very important.” He can name from memory every ETC console from Microvision FX to Eos Ti®.

ETC 24 x2.4K Sensor® dimmer packs and Element™ consoles witness high romance on The Bachelor’s tropical locations. On the set of Shark Tank, 40 ETC Daylight HD fixtures will soon replace 54 of the first-generation Source Four tungsten units. Working from another Oscar Dominguez idea, ETC Source Four Mini™ fixtures mounted in a ring with an ETC Daylight HD fixture in its center are increasingly being used as artists’ keylight. Each fixture can be individually controlled and focused to produce a sculpted look on camera. Rudge has noticed an increased use of Source Four fixtures in non-traditional applications: “A few years ago, a presidential debate would be lit with 5K or 10K washes; now designers are using profiles as keylights.” 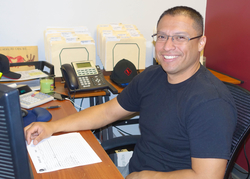 Thanks to the creation of fast lensing and sensors in current TV cameras, commercials are now being lit with a handful of Source Four LED Lustr+ fixtures. However, ID still has an impressive fleet of generator trucks on hand for outdoor broadcasts at the Rose Parade or USC football at the Rose Bowl.

A wholly owned subsidiary of the ARRI Group, the company was founded in 2001 by industry experts Carly Barber and Jeff Pentek, and serves the film and TV market in Los Angeles and Charlotte, North Carolina. Company CEO Carly Barber, another UK transplant and 35-year veteran of the lighting rental industry, has witnessed seismic changes in broadcast lighting: “We have moved from dimmer-based incandescent systems to HMI, and now more shoots are going out with small LED packages. The turnover of technology is fast paced.” With so many purchasing choices, ID favors vendors who share their focus on quality, reliability and prompt customer service.  Rudge predicts considerable growth in the theatrical area.

With a little help from ETC, ID looks ready to light a seemingly endless supply of reality TV in the studio and on remote Caribbean islands. Meanwhile, back in Wisconsin, a field service technician dreams of the emergency that will take him to the set of The Bachelor in Paradise.