HSL30 – All Smiles for An Industry Celebration! 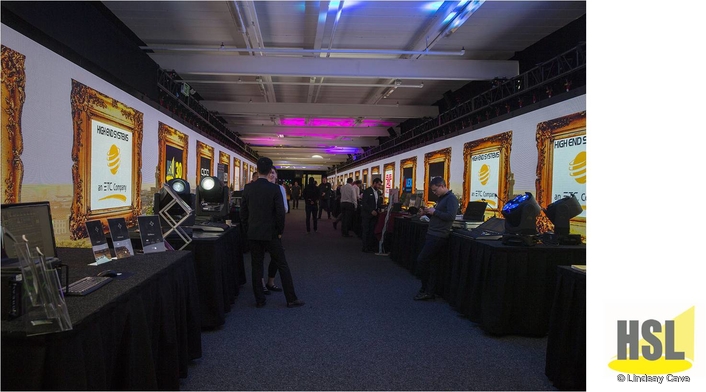 The event included an exhibition space which was dedicated to 32 of HSL’s key suppliers and partner companies including high profile brands and manufacturers like Avolites, Chauvet, High End Systems, J&C Joel, Martin by Harman, Robe, SGM, Philips Vari*Lite, Unilumin and many more, who showcased their latest technologies and enjoyed the general conviviality! 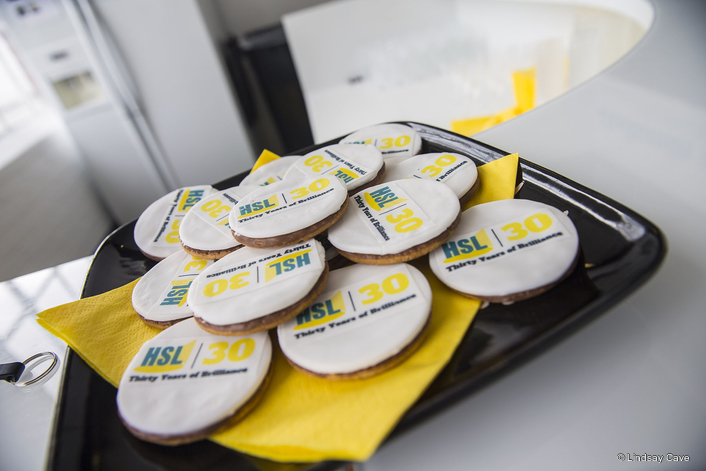 HSL’s Simon Stuart worked closely and tirelessly to make HSL30 happen with a short lead time, just before the autumn touring season kicked in. He worked alongside Jeff Demain as the co show producer to get the building prepared while event organiser Mark Walsh took care of the administration. In fact, almost everyone working at HSL participated and assisted in some way or another to ensure it was a memorable occasion for all to share.

The gallery space received palpable gasps of astonishment and awe as people walked in for the first time.
It featured a stunning digital backdrop to each stand, created using two 60-metre-long by 2.5-metre-high runs of HSL’s new Unilumin Upad III 5 mm LED screen.

Using a disguise gx2 media server, each run of LED was divided into 16 equidistant portions to delineate the stands, and in the centre section of each stand’s LED surface allocation … was a 1.5 x 1.0 metre ‘picture frame’ space of 3.9 mm LED … onto which each company could display its own artwork, logo and showreel or video content.
The gx servers were programmed and coordinated by creative video specialist Lucid Technologies, one of the dynamic and vibrant independent companies operating as part of the HSL Group. 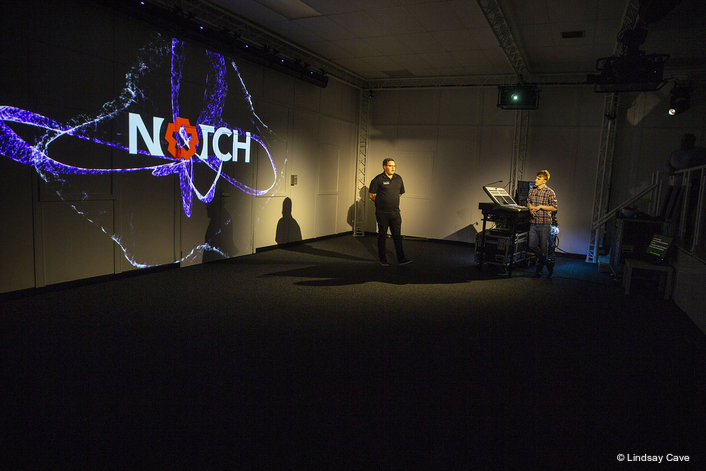 Throughout the event in one of the many demo room areas, Lucid also showcased the power of some of the latest live media technologies like disguise, BlackTrax and Notch.
3D content was projected via five Panasonic PT-RZ12K 12K projectors covering 270-degrees of the demo room, with the timeline triggered via another disguise gx2 media server hosting Notch realtime rendering software and combining information from an Avolites Sapphire Touch lighting desk that wascontrolling four Robe Pointe moving lights.

Creating the automated movement, BlackTrax transferred positional data received from six infrared cameras into the media server which distributed it to Notch. All processing for BlackTrax was handled by a Lucid custom rack with networking systems by Luminex.

Avolites demonstrated their AI media server in another self-contained area, while Green Hippo and ETC also had dedicated studios, to showcase their latest technologies in a relaxed and quiet environment. 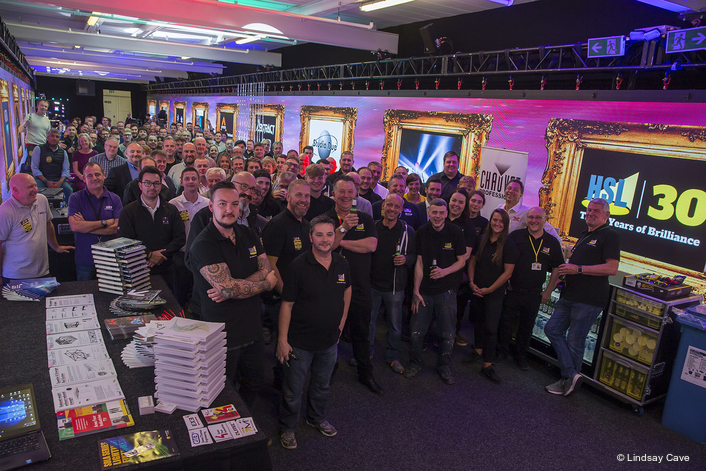 HSL seized the opportunity of having so much of the industry there to officially inaugurate its Coral Cooper Training Centre for Excellence. A large classroom training facility – inspired by Coral which is at the disposal of all the training and educational courses being run at HSL.

Everyone shared the fantastic vibes, the great attitude to life, work and business and the creative and technical magic that has helped establish HSL as one of Europe’s leading entertainment technology equipment rental companies.
Visitors were also treated to tours of HSL’s vast warehouse facility and were able to engage in plenty of social and business interaction over three airy and attractive gallery spaces which were especially dedicated to the event.

Clearly emotional, HSL’s MD Simon Stuart admitted to being quite overwhelmed with the response! “I am soooo impressed and extremely moved by the sheer number of friends who turned out to share this very special moment. So many have been truly inspirational in shaping my life, and that of my family! It’s been really incredible!”
He added, “Being a business for this amount of time is hard! A lot happens in 30 years and I wouldn’t have got through it if not for all of these wonderful friends and people in my life!” 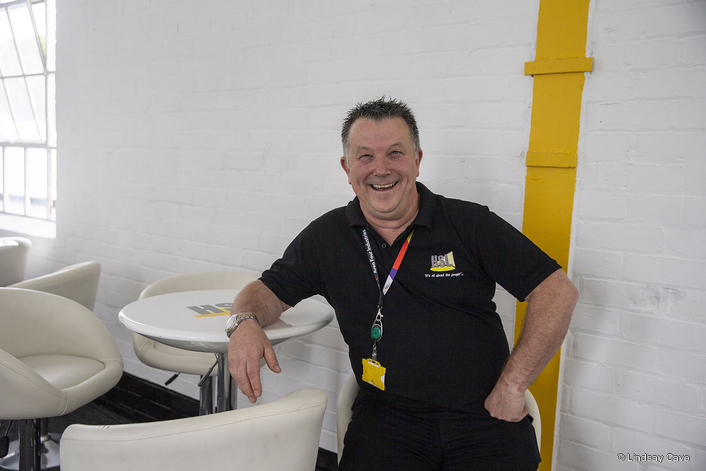 It wasn’t just Simon who felt that way, his feelings were echoed by numerous attendees.
Ian W Brown, sales manager from Robe UK stated, “I’ve known Simon for 30 years, in fact I sold him his first moving light 30 years ago when he owned a snooker club! Over the years Robe has supported Simon and HSL enthusiastically and seen it grow from a small business into the powerhouse it is now!”

Ian and his co-workers relished this great opportunity to spend some social time with colleagues and friends.
Rob Beamer from Sound Technologies (Martin by Harman) also loved catching those good HSL vibrations. “It’s important for us to be here today supporting Simon – the Martin brand has been a big part of Simon's commercial life. All in the room are friends and the networking has been fantastic between suppliers … but apart from that, it’s just nice to see people … and not be in the whole trade show type scenario”.

Shaun Robertshaw from Vari*lite agreed, “We are a long-term partner of HSL and were one of first to do business with the company, so it’s great to show our appreciation of 30 years hard work and dedication by Simon and his team”.

The one and only Steve Warren from Avolites – renowned industry social warrior – also remembered how the popular lighting control brand has been there right from the start of HSL. 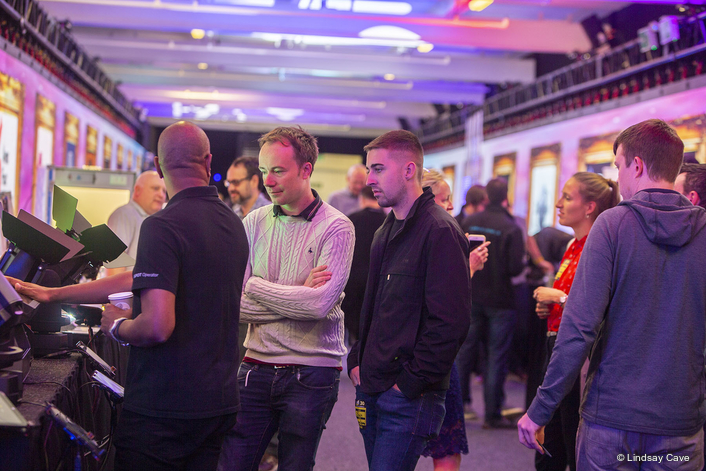 “Simon has always been supportive and we’re here in force to reciprocate! The open days have been amazing – fantastically productive and a bit like PLASA 2.0 coming so soon after that show! As a southern based company, it’s vital that we continue to venture north, and we love all that famous warmth and friendliness! We are really chuffed to be here”

Steve observed that if there was an industry award for synergy – HSL and this event would be a clear winner!

HSL30 - which included a lively VIP dinner following the second day – made a big all-round impact according to organiser Mark Walsh, who said “I knew it would be good, but this exceeded all my expectations”.

Everyone working in all areas of HSL’s busy operation, which also kept running full tilt throughout, contributed to the event and ensured that the all aspects - from the catering to the car parking - were organised and ran well and efficiently.

While everyone was there to It celebrate HSL’s remarkable achievements, development and progression over 30 years, they also received a snapshot of the substantial and very busy operation it is today.

HSL30 was also great example of how Simon likes to run his business, working hard and valuing the art and benefits of real face-to-face-time for everyone which is integral to his enterprise philosophy.

“Time is THE one thing we can’t manufacture these days” he declares, “To snatch a few precious moments where we can all collectively spend time together for no other reason than to spend time together … is incredible! These guys and girls mean the world to me... they are a reason to get up in the morning and their passion and commitment on all levels helps drive me”.

“I am also lucky enough to have this fantastic team here in Blackburn. HSL30 is about everyone here and the chances and opportunities we have shared and built together over the years to move forward and become the HSL community of today”.