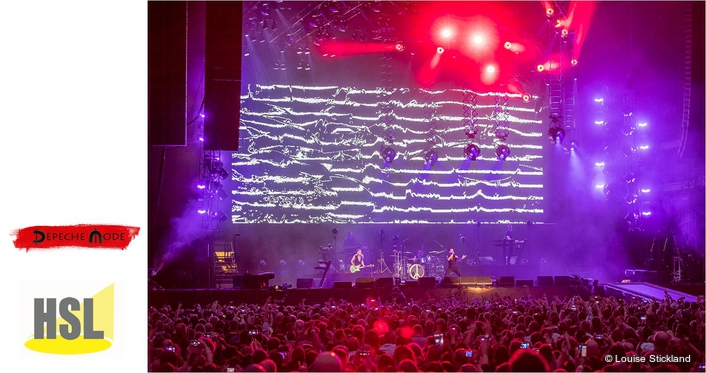 Depeche Mode are, beyond doubt, one of the most exciting live bands in the world! A show-stopping career spanning four decades and a reputation for musical originality has kept them relevant and at the cutting edge in delivering one visually and sonically inspiring  performance after another … to hordes of adoring fans across the globe embracing all demographics. You could just say … they totally rock!

Blackburn lighting rental specialist HSL is very proud to be the main lighting and video contractor worldwide for the current “Spirit” tour. They are partnering with CT to deliver the video package.
The raw, stylish, industrial production design is by creative director Anton Corbijn, who has always pioneered video as an essential vehicle of live production. Lighting has been designed by Sooner Routhier and Robert Long of SRae Productions and is being directed on the road by their associate LD, Manny Conde.

The ‘Spirit’ tour is being production managed by Tony Gittins and plays a mix of stadiums and arenas. HSL’s project manager Jordan Hanson is working closely with CT’s music and touring specialist, Graham Miller and the HSL crew of five is being chiefed on the road by Ian Stevens. They will be travelling internationally, together with the full lighting rig.
HSL’s MD Simon Stuart commented, “We are delighted to be working with Tony and his team on this ground-breaking tour and it’s been a real pleasure to collaborate with Sooner and Manny and ensure they have had all the support they need. The design is innovative and edgy. I am a huge fan of Sooner and her thoughtful, intelligent approach, which captures the mood perfectly. The band are on top form as always!”
Sooner and her design partner Robert Long were contacted by DM’s management – who also handle The Weeknd, another of Sooner and Robert’s current clients - at the end of 2016 to talk about lighting the tour.

The sheer presence of the band - and in particular uber-charismatic frontman Dave Gahan - is intense, and their live shows have been conscientiously styled over the years by Anton, who has pioneered video and moving image as an essential live production value – way before it was ever de rigueur!
Sooner explained that the entire look of the ‘Spirit’ show is inspired by Anton’s branding for their 14th studio album (of the same name) which was released in March. The stage has an upstage walkway with the front clad in LED screen and a long runway on stage left extending into the audience with a shorter one on stage right.
The large upstage video wall is a 15.6 metre wide by 6.6 metre high 7mm pitch rectangle which meets the lower strip - along the front of the walkway measuring 15.5 m wide by 1.8 m high, also 7mm in pitch – which looks like one continuous surface from the front. These two onstage screens are packaged in CT’s convenient quick-assembly touring frames. 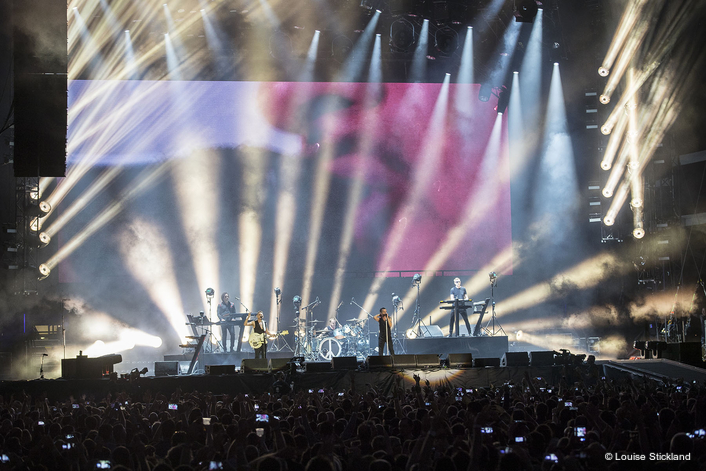 The IMAG screens are constructed from 8mm pitch Aoto M8E product from CT. The stage right one is in a landscape orientation and the stage left one is portrait and these asymmetrical elements, together with Anton’s request for a stark, edgy feel to the lighting … led to Sooner’s proposal of the asymmetric lighting rig.
The workhorse lighting fixtures are Vari*Lite VL6000 Beams, which were purchased brand new by HSL for the tour and work in conjunction with  Robe BMFL Spots as the main profile fixtures.
These are distributed on three or four (for the stadium shows) upstage / downstage orientated trusses on stage right and three (or four) onstage / offstage trusses on stage left, together with two flown vertical side torms either side of stage. 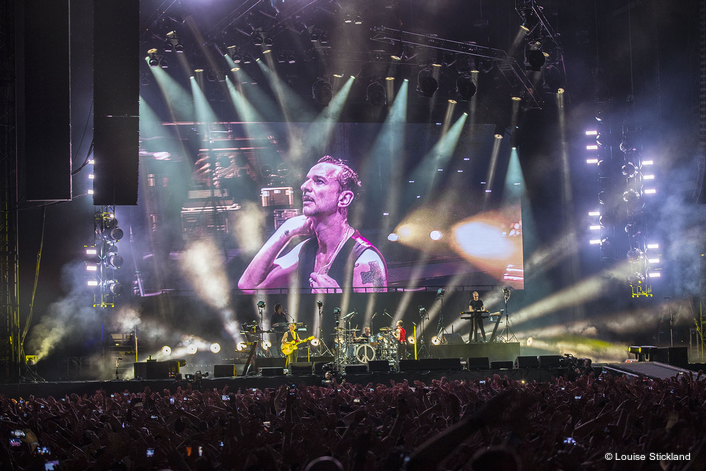 Simon Stuart comments, “The VL6000 Beam captured my imagination, just as I knew it would with lighting designers. Right from the very first time I saw it previewed at LDI, I knew this product would become a key in my rental inventory.
“The retro styling and design plus the cleverly thought-out colour system and aerial gobo section combined with such a massive collimated beam of light … makes it a total winner.
“The feedback from LDs has been very positive, with many commenting that Philips Vari*Lite has more than just lifted the bar for this type of product, they’ve set an entirely new standard!”
GLP X4 LED washes in the overhead trusses kick in for potent back and rear effects.

Four of the BMFL Spots – two a side – are positioned on the deck for low-level cross lighting onto the band. There is also a row of VL6Ks behind the band and upstage of the backline, and Claypaky Sharbar moving multi-beam LED battens.
Forty-eight Philips Nitro 510C LED strobes are rigged on the audience end of the stage right trusses and on the side torms, arranged to look like stadium house lights. They are used very flexibly for additional wash lightsources and audience blinding as well as for standard strobing and zoned effects.
To add some physical movement and idiosyncrasy, Sooner specified eight specials on Pantographs, which required custom fabrication. HSL sourced eight classic 10K fresnel housings, refurbished them and custom fitted each with two GLP X4S compact LED washes. The zoom on these is extremely tight and can resemble a spot, so the resulting custom unit is quirky and highly effective.

For general stage and set washes, Elation SixPar 200s are used as truss warmers and for band lights and LED PARs on each of the pantographs highlight the scissor mechanism is lit as it extends downwards.
The stage left runway is outlined with Martin Sceptron LED battens, which together with the Sharbars, are mapped and fed video sources via a Green Hippo server triggered by Manny’s grandMA2 full size console. “They are super bright and look great,” he comments.
In front of the PA wings and below side IMAG screens each side are 8 x Robe MMX WashBeams installed in weather domes. Two Robert Juliat Lancelot follow-spots are also on the spec.
As you would expect from a Depeche Mode show, the dynamic range of the music is massive. 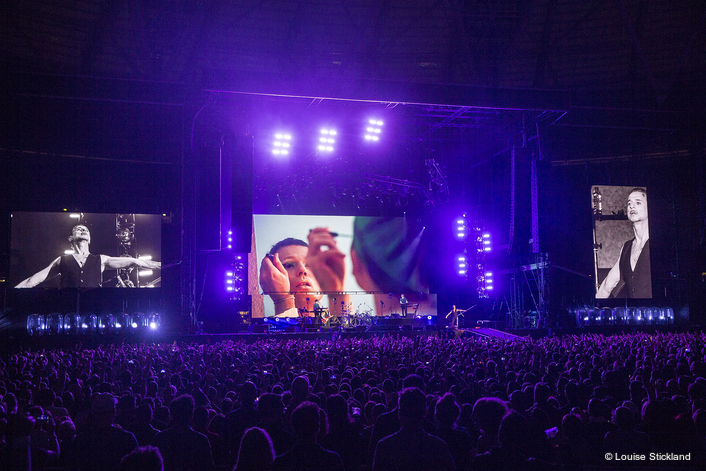 Anton produced eight unique films which play out in the big screen in specific numbers, and other video pieces are composited from his animated artwork, some of it beautifully simple and others cerebrally complex.
The content is programmed and run via Green Hippo Taiga servers, selected as the best option for these applications by the design team.
The IMAG mix is directed by Richy Parkin, utilising a Panasonic 6000 PPU from CT together with five operated Sony HXC-100 cameras positioned at FOH, in the pit and hand-held onstage, plus three Q-Ball robocams dotted around the stage.
Other times, the lighting is left to carry the mood and atmospherics of the song. The show starts quite minimally and builds momentum to a full stadium rock finale as Dave Gahan takes enrapt fans on an epic DM musical adventure. 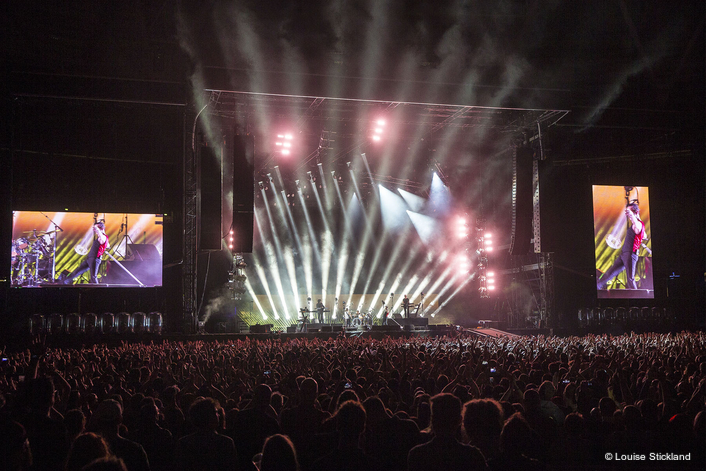 One of the starting points for Sooner and Robert, once the asymmetric design was proposed and green-lighted, was to ensure that the lighting is “proportional and properly distributed”, a goal she feels has been achieved with this rig, which delivers such a vibrant mix of looks and scenes.
Brian Jenkins worked alongside Manny and Sooner as a programmer and associate designer and did “an incredible job” in ensuring that the lighting surprises keep coming right until the end of the set! You don’t see anything twice!
Time was their biggest pressure during production rehearsals – a week at LS Live in Wakefield followed by a pre-production week at the Friends Arena in Stockholm ahead of the first gig. Luckily, Sooner notes that both Brian and Manny are very fast programmers! Manny comments that this part of the process was extremely dynamic and collaborative with all three of them bouncing and sharing ideas. 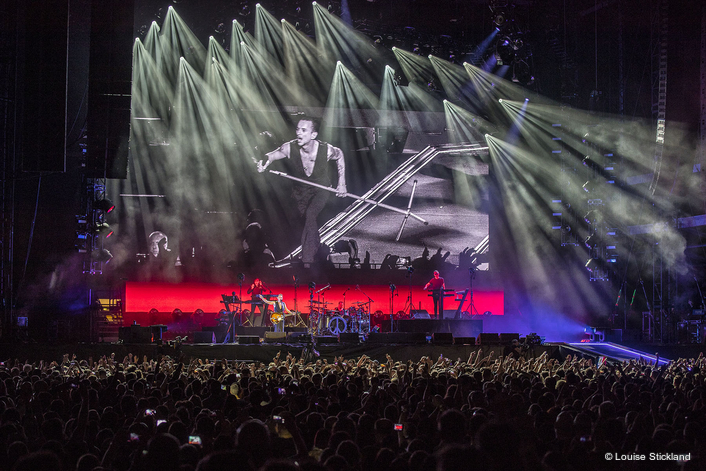 For Sooner, working with HSL has been “brilliant – a really excellent experience, great, very nice people and no requests were ever too much!”
Creating a show with an imaginative genius like Anton Corbijn has also been noteworthy. “Not only does he have wonderful and incisive creative vision, he’s an incredibly lovely man,” she concludes.
Manny, who cut his professional teeth working in techno clubs in New York, has been working with Sooner for around 18 months. “Every day I learn something from Sooner and other amazing people in her team,” he says. He is also enjoying working with the “fantastic” HSL crew on the road.
Joining Ian Stevens is Harrison Cooke who is co-ordinating the moving light technology day-to-day, Andrew Whitaker is on ‘dimmers’ and completing the team are are Jake Jevons, Neil “Braveheart” Smith and Ben Eastham.

Graham Miller and CT’s project manager Jim Liddiard are also liking the experience of working with HSL, the first time the two companies have worked as visual partners on a world tour. “I’m very impressed with HSL’s delivery and it’s great to discover that we share a similar outlook on packaging, crew and delivery – there is a real synergy!”
Simon is hugely positive about the alliance with CT, “Their operation is top notch, they have a skilled team of people with a great attitude and I look forward to working on more projects together in the future”.
Mixing FOH sound is Antony King, Sarne Thorogood is the monitor engineer and Shawn Saucier is stage manager.
The ‘Spirit’ tour continues for the rest of the year and beyond.