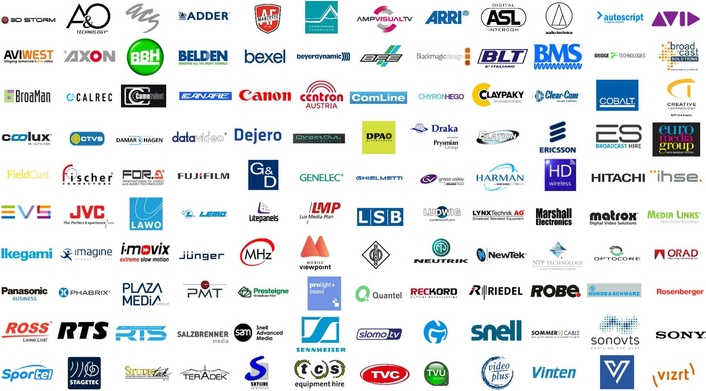 After 11 Years we say Thank you to all our Customers, Sponsors and Readers

Live Events is the only industry that is and will be totally shut down for over a year and more with zero income. The companies and the people in the industry cannot gain commercial loans or financing because their balance sheets and profit and loss statements are negative, and they have no income stream that will allow repayment of a commercial note. The Live Events Industry in particular is at the point of extinction, as every firm is closed and will be until June 2021 or longer.

Some reflections of the past 40 years in Live Production. I work in this Industry since1980 for most of the time on the Hardware side improving the production and transmission of Live Events. We moved the videosignal quality from FBAS Recording to Component recording (U-Matic to Betacam) and from analogue to digital recording.

The Betacam Format proofed its reliability at the 1988 Winter Olympics in Calgary where the lady’s downhill winner Marina Kiehl was recorded with a Betacam camcorder during the flower ceremony at the finish area following her straight to a helicopter flying her directly to the German broadcast studio at the IBC with temperature differences from -10 to +30 degrees Celsius. The recordings on the Betacam cassette were played back during her interview in the studio without any dropout.

Marina Kiehl at the Olympics in Calgary

In parallel we promoted the move from SD 4:3 production to HD 16:9 production.

At the end of the 1980’s, the Eureka initiative of manufacturers and broadcasters in Europe triggered the development of analogue HDTV equipment and production facilities, key suppliers being Thomson and BTS. The initiative was based on a) the analog transmission standards (HD-MAC, D2-MAC for standard definition), b) Test production & transmission during the Olympic Games 1992 in Albertville (Winter) and Barcelona (Summer) and c) numerous productions in Europe, organized by the European Consortium VISION 1250 with production facilities provided mainly by Thomson and BTS. The European Consortium VISION 1250 was responsible for the production and distribution of the HDTV programs produced at the Olympic venues in France. Transmission of the signals at the time were provided via Satellite using the analogue HDMAC-transmission standard, reception was provided at about 150 special viewing sites throughout Europe. European production teams from France (SFP), Italy (RAI), England (BBC), Sweden (SVT), Spain (RTVE) and Portugal (RTP) produced the individual events. However the European VISION 1250 system didn’t succeed. After burning some 100 million ECU it disappeared.

VISION 1250 equipment at the Olympics in Alberville and Barcelona

After this Intermezzo the focus was solely on the Japanese 1125 lines system. A first terrific example was the test of the NHK 1125 lines system during  the 1996 Summer Olympics in Atlanta where the mens 4x 100m rely was covered with one camera on the roof of the stadium, starting with a totale covering al eight start runners following them by zooming in  to the first exchange then following  all eight athletes to the second exchange, then zooming back to cover the third exchange following the eight athletes the last 100m to the finish line documenting  the win of the quartet from Canada.

The Summer Olympics in Atlanta

The real success of HD took place in 2006 where the FIFA soccer world championships in Germany were covered in SMPTE certified 1080 lines. At the FIFA championships2010 in South Africa and the 2012 Summer Olympics in London the TV viewers also had the chance to see some of the events in 3D. However, the 3D experience found a home only in the cinemas.

The FIFA world Cup in Germany and in South Africa

But not only in sports HD became a success - also in the recording of high-end show events like Robby Williams concert in Knebworth 2003 and the industry continued to introduce the next Quality step in video recording and transmission with 4K UHD by covering the 2013 concert of MUSE Live in Rome. And the Eurovision Song Contest from 2017 onwards was covered in 4K

In parallel to the quality improvement of the video signal we moved from linear editing to non-linear editing and finally into the cloud which enabled us to go around the planet in 80 milliseconds and produce the first-ever fully decentralized production of a live, global music event. On Nov. 22 the live-streamed program opened with Purple Schulz playing an intimate, center-stage concert in the One2One Studio in Bottrop, Germany, with Stephan Ullrich and Daniel Klein thrilling audiences with a performative reading on Nov. 23.

In 80 milliseconds around the world

iPads were placed in seating positions around the stage enabled interaction between the streaming audience and the artists, adding a powerful immersive element and making the event more tangible for all.  The on-site production team worked with a minimal cast, with the director working remotely and in real time from Vienna, the lighting designer from Munich, and the lighting operator from Frankfurt. FOH and broadcast sound was mixed in Cologne, and the parallel sound recording was controlled in 5.1.4 from Valhalla Studios in New York. The TV Skyline Skycenter in Mainz acted as a hub for camera control, image mixing, and stream delivery, while teams in Berlin managed quality control and remote audience aspects.

The technological heart of the production was the Riedel ROC, the communications and signal control centre through which all remote production connections converged. The ROC team managed, programmed, and monitored all intercom signals, data streams, audio feeds, and CCTV feeds.

Even if it was a proof of concept that Remote Production is possible, it was far from Live. Digitisation, virtualisation, gaming and the drive of a new generation of live production enthusiasts have set positive pulses and a new embossing. However, the unique experience of a live event needs the immediate touch of reality, the contact with other spectators and the adrenalin of the stars and the focus on the moment at the location including the unique moments which are building up during a live event. This is visible and tangible even if you watch the match or the show on the other side of the planet.

But all this is history and Corona is preventing the whole planet from having live events. Even the 2020 Olympic Games in Tokyo were postponed by one year and Corona still keeps a lot of question marks behind all live events in 2021 even the world now has first vaccines.

However, the biggest impact of COVID-19 is actually a cultural one: It’s no longer about faster, better, cheaper and more powerful machines. It’s about people’s understanding that this planet is changing. And if we are not willing to save this planet following the guidelines of the Paris Climate Agreement the planet and the people on it will face even harder times. The German Magazin “Spiegel” meanwhile presents continuously updated figures on The status of the planet:

The status of the Planet

Our planet and our industry are changing at light speed, so we not only need to change with it, we need to stay ahead of it from a product, service and technology solutions perspective, and lean into the trends we’re seeing.

The Live Production Community People are passionate about what they do and have a collective mind for developing customer-focused innovations that will harness at an even greater level so the community can deliver even more scalable, flexible products and solutions along the entire value chain in the events and sports sector industries as long as the planet stays stable.

"Simplicity was key. Our strategy was based on one foundation: following the viewer."

Some of the more then 100 Stories waiting for you:

For the past few years, it was a safe bet that the technology priorities for chief technology officers in broadcast and other professional media verticals involved a move to the cloud, however where it fell on the list of priorities varied widely. With so many media and technology professionals “finding the time” to move their infrastructure to the cloud, it was happening on the weekend, in the evenings, during quiet days in the office, and for some, it was little more than a hobby.

Live in the Cloud

The pandemic changed priorities heavily by demanding a development that has been a long time coming—a complete move to the cloud. The inactiveness due to the pandemic showed that what was once perceived as a benefit of this infrastructure suddenly became a necessity for business and personal survival.Other priorities in 2021 will center on workflow efficiencies and cost savings. These are neither new concepts nor new priorities for a technology leader. What is new is the means of achieving a desired level of efficiency. And many are looking to what is known as the sharing economy to accomplish this.

THE ENERGY NEEDED TO KEEP OUR PLANET ALIVE