Warren Taggart, Managing Director of ES Broadcast Hire, with one of the company’s existing Fujinon 4K lenses, the UA80x9BE

ES Broadcast Hire, the broadcast equipment rental division of ES Broadcast, is to further expand its considerable range of UHD live production lenses with the addition of a fleet of Fujinon’s latest 4K box lenses.

The company has purchased 11 Fujinon UA27x6.5BE and 22 Fujinon UA107x8.4BE lenses. The new box lenses will complement an existing inventory of Fujinon UA80x9BE 4K box lenses and UA14x4.5BERD and UA22x8BERD ENG lenses. The lenses are due for delivery in December and will be available for immediate hire.

The Fujinon lenses represent ES Broadcast Hire’s latest acquisition of UHD broadcast equipment, as the company continues to grow its 4K hire fleet – already one of the largest inventories of UHD equipment in the world. 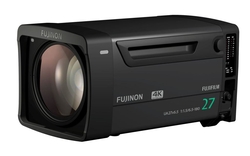 Warren Taggart, Managing Director of ES Broadcast Hire said: “Our existing fleet of Fujinon lenses have proved popular, especially with our sports production clients. They have been used on prestigious sporting events such as the Monaco F1 Grand Prix, Premier League football, the Six Nations rugby championships and the UEFA Champions’ League final this year.

“It was an easy decision to augment our Fujinon line-up with these new lenses. The UA107 will expand our range of lenses for live sports, while the UA27 will appeal to studios for light entertainment, as well as fulfilling a role on the halfway line at football and rugby matches.”

Marc Horner, Marketing Manager for Fujifilm Optical Devices Europe said: “Partnering with ES Broadcast Hire is a perfect match for us since the company shares our high standards for resolution, dynamic range and contrast performance. We’re confident that by adding the Fujinon UA107 and UA27 lenses to its 4K fleet, ES Broadcast Hire will be able to provide the same excellent service their clients expect, covering an even wider range of production.” 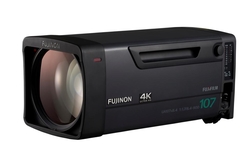 ES Broadcast Hire is currently one of the UK’s only hire companies to own Fujinon broadcast 4K lenses.

Both lenses will be available to hire from ES Broadcast Hire in December 2017. Interested parties should call +44 (0)1923 811 520, or email bookings@esbroadcasthire.com