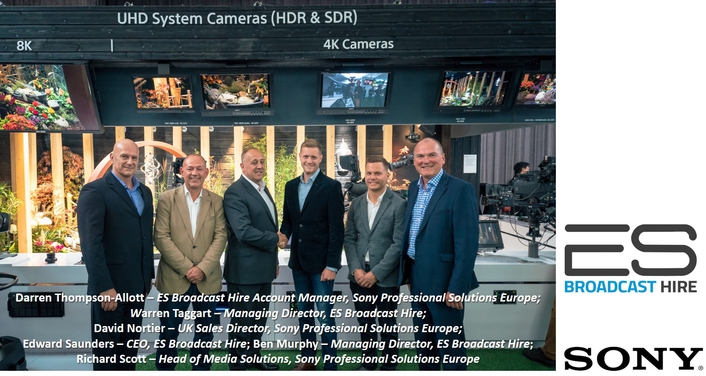 Sony’s technology will be used to deliver contracts for major sporting events and future-proofs ES Broadcast Hire's offering as more customers make the move to 4K.

The investment comes as rental specialists ES Broadcast Hire continues its rapid European expansion, with new offices in Munich and Madrid and a further opening expected in Belgium in late 2017.

Headquartered in London, ES Broadcast Hire was the first rental company to invest in Sony’s HDC-4300 in January 2016.  It now has the larget fleet of HDC-4300s in Europe, totalling over 140 channels in addition to more than 100 Sony HDC-2500 cameras already in its inventory and a number of HDC-P43s.

Sony’s HDC-4300 was chosen for its uncompromised image quality. The model can seamlessly integrate with HD infrastructures and advanced workflows, providing a smooth path to 4K to ignite the passion of sports fans. The HDC-4800 offers 8x slow motion in 4K or 16x in HD enabling incredible replay and detailed action highlights.

Edward Saunders, CEO, ES Broadcast Hire, commented “We chose Sony’s HDC-4300 because of its proven 4K and HDR performance. We know that an investment in Sony technology will enable our customers to deliver high-quality content to audiences across the globe.”

David Nortier, UK sales director, Sony Professional Solutions Europe, added: “This major investment shows ES Broadcast Hire’s continued confidence in Sony and our technology. By choosing Sony’s HDC-4300 cameras, ES Broadcast Hire has equipped themselves with an even stronger fleet of 4K and HDR cameras, which will help their customers tell stories to build their brands and audiences.”

With a winning combination of technology and creativity Sony partners with businesses across a wide variety of sectors including Media and Broadcast, Theatre, Healthcare, Sports and Corporate and Education markets to deliver innovative and transformational customer solutions.

Operating with over 30 years’ experience and a trusted network of established technology partners Sony’s wide portfolio of product and services propositions provides true value to businesses and informs, educates, entertains and inspires their customers.