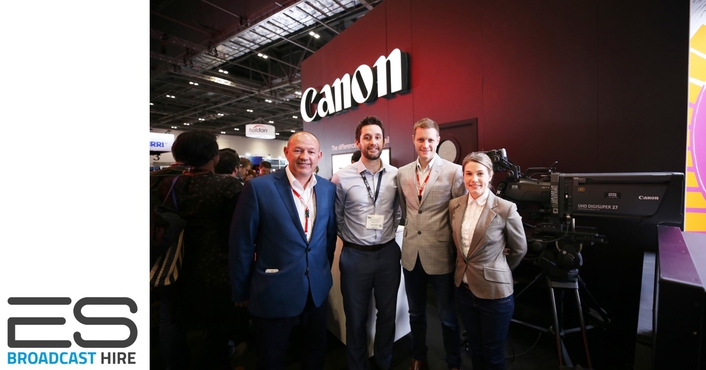 An initial delivery of four lenses – ordered as soon as Canon announced the UJ27 at the IBC 2016 trade show in Amsterdam last September – is set to arrive in early April, adding to the company’s existing fleet of more than 300 broadcast lenses.

ES Broadcast will also shortly be taking delivery of its first Canon UHD DIGISUPER 86 (UJ86x9.3B) lenses which, along with a large existing fleet of Canon UHD DIGISUPER 90 (UJ90x9B) lenses, will mean the company will be able to offer Canon’s full range of UHD studio and field lenses for hire.

This latest acquisition of UHD lenses further cements ES Broadcast’s commitment to supporting UHD live production. The company already has one of the largest hire fleets of Sony HDC-4300 4K camera channels in the world.

Warren Taggart, Managing Director of ES Broadcast’s hire division, said that the UJ27 would meet growing customer demand: “Studios and outside broadcast companies have been requesting a smaller UHD box lens for some time now.

“Building on the success of Canon’s original HD DIGISUPER 27 lens, I am sure the new UJ27 will be very popular indeed. The ease of use and reliability of Canon’s products will no doubt ensure trouble-free shooting for our UHD customers.”

“Our UHD DIGISUPER lenses are designed for any studio or field workflow so with the UJ27, users will be able to capture the best quality content possible in any situation,” said James Burwood, Product Manager, Professional Imaging, Canon UK & Ireland. “And with Canon’s in-house lens servicing, ES Broadcast can be sure that its lenses will remain in the best condition to continue capturing the highest quality images for its customers into the future.”

The UHD DIGISUPER (UJ27x6.5B) is a 27x telephoto broadcast zoom lens with a 6.5-360mm focal range using the built-in 2x extender. The lens will be available to hire from ES Broadcast in April. Interested parties should call +44 (0)1923 811 520, or email enquiries@esbroadcasthire.com