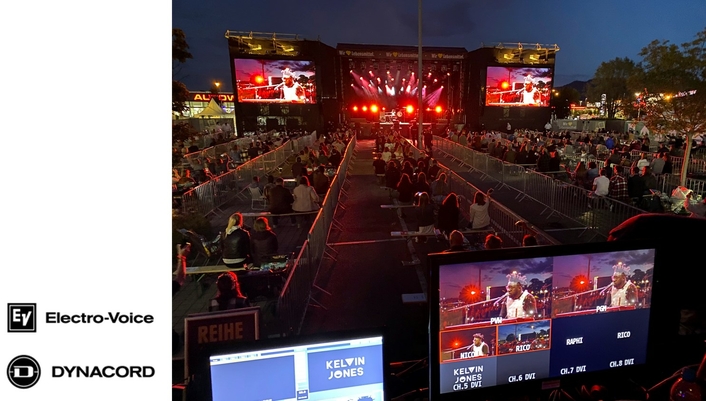 Badensound event company has worked out a new concert concept that uses existing infrastructure to host performances complying with the local COVID regulations. This concept led to a partnership with Edeka Südwest supermarkets to create the "shopping cart festival.” Taking place from August 31 until September 5 in Offenburg, Germany, the festival featured famous German artists performing in front of 500 people, the maximum number of people currently allowed for large gatherings, in the parking lot of an Edeka supermarket. Shopping carts were used as social distancing tools to adhere to the COVID regulations. On the technical side, Badensound used the festival to give Dynacord’s new MXE5 matrix mix engine its German debut. 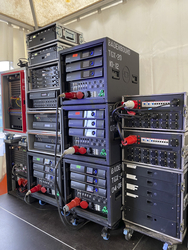 "Now is exactly the right time to organize an attractive festival in the region, to offer artists a platform and to support the Corona-impacted event industry," says Rainer Huber of Edeka Südwest, describing the idea behind the new festival.

Badensound deployed an Electro-Voice X2 line-array system to ensure powerful main PA sound for the festival, featuring two hangs of 12 X2-212 elements per side, with low-frequency support from 16 X12-128 subwoofers. 12 Electro-Voice MFX multi-functional loudspeakers were used as stage fills and stage monitors, complemented by Dynacord V17 subs and Cobra cabinets as drum fills. Near and out fills consisted of an additional 24 Electro-Voice XLE compact line-array elements.

State-of-the-art Dynacord amplifiers powered the entire sound system. A dozen TGX20 four-channel and three IPX 10:8 eight-channel amps delivered a stunning total of 270 kW. The MXE5 matrix mix engine served as the system head. All electronics have OMNEO IP architecture on board, allowing the entire sound system to be run flawlessly on Dante audio without the need of retrofitting. System setup, tuning and monitoring was handled by SONICUE sound system software. 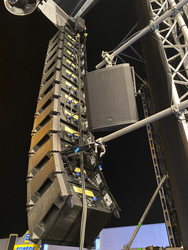 The line-up of well-known German artists included among others Michael Schulte, Christina Stürmer, Kelvin Jones & Jeremias, Glasperlenspiel and Laith Al-Deen. All performers were very keen to return to performing live on stage, and after the budget was released by EDEKA, it took Badensound’s company owner Johannes Moeck only four weeks to make the whole event happen.

"We are extremely pleased with the positive response to the idea of the Edeka shopping cart festival. The success proves to us that we have hit the right tone with this event," adds Florian Heinzmann of Edeka Southwest.

"In hindsight, the event turned out to be a blast,” reflects Moeck. “I'm very thankful to be back to work, even limited by the current restrictions. Everyone had a wonderful time, the audience, the artists and the Edeka officials. Our sound equipment from EV and Dynacord proved once again to be the best choice to guarantee a flawless event. I have already been approached regarding a repeat of this event. Thanks to Dynacord's support, I was privileged to work with the MXE5 for the very first time and I can only tell you that it will revolutionize the business!"