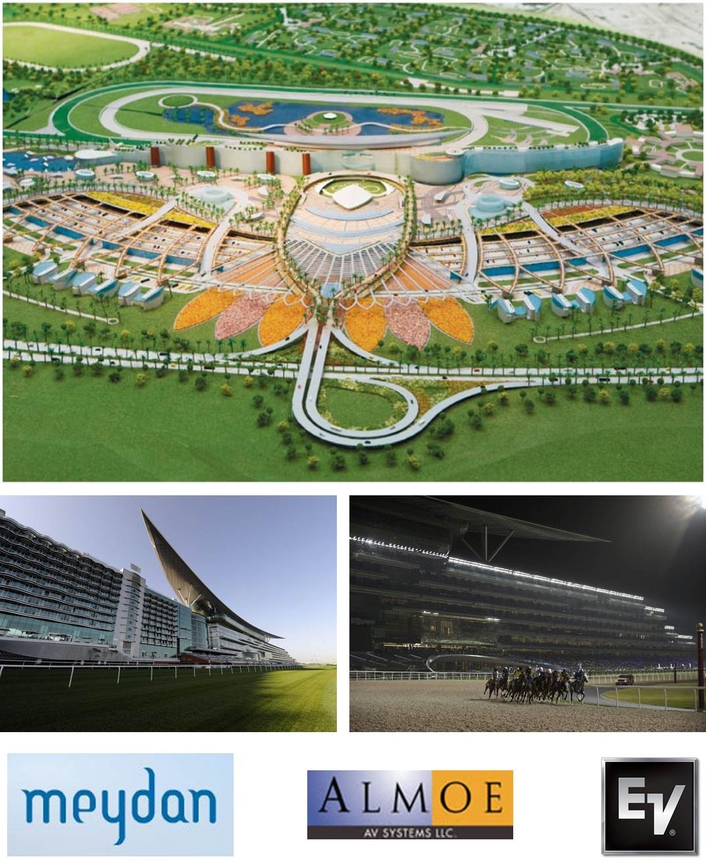 Meydan City is centering on a five-star hotel complex with one of the world’s largest hippodromes
Meydan City is the latest large-scale showcase project in the Arab Emirate of Dubai. Along with a marina, a five-star hotel complex – complete with international restaurants and an IMAX cinema – the Meydan Racecourse is one of the central pillars of the prestige project: a hippodrome with the finest modern amenities.

The Meydan Racecourse, which blends perfectly into its environment, has an exciting ambience and is capable of accommodating over 60,000 spectators at a time. An enormous construction which requires a gigantic audio-installation: more than 4 500 Electro-Voice loudspeakers, the fully redundant CobraNet infrastructure using the N8000 NetMax Digital Matrix Controllers and the latest CPS multi-channel amps. To provide the audience with a state-of-the-art acoustic experience, the Dubai-based service provider Almoe AV Systems headed by Dave McMahon and his team – lead by Meydan Project Manager Zahid Abbas Mir – had a hard task ahead. Dave McMahon commented “We had an enormous area to cover, extending from the track itself to the lower and main grandstands – fully 120 meter from front to back – and the associated delay posed a considerable challenge.” Additionally, “We’re talking more than 4 500 ceiling speakers across the entire facility, all of which are actively monitored. On race day, the network is designed to operate as one massive super system”, all controlled by “one of the largest CobraNet installations in the Middle East”.

Almoe’s Project Manager Zahid Abbas took the lead on this project and had his challenges. Zahid Abbas comments “There are 21 remote racks in Meydan and the tricky part was to use the building’s network infrastructure for the vertical network and a new installed horizontal network to cater for the system.” The network infrastructure with several interleaved and connected sub-networks was especially tailored to the projects’ topology. The integration of all 43 Electro-Voice N8000 network controllers and 114 remote controlled and supervisioned multichannel amplifiers of the Electro-Voice CPS series into one comprehensive IRIS-Net software file with individual GUI’s for convenient operation and integrated supervision was a successfully solved special challenge for Almoe and the involved Electro-Voice Tech Support. Sundar & Kannan from Almoe were given the job and created all the necessary GUI’s needed for both the hotel and the racecourse. These cover inter alia the VIP area, bar, dining and pool area.Almoe has long relied on Electro-Voice products as their performance in extreme circumstances like weather or temperature is without competition. Again, they have worked beyond expectations. 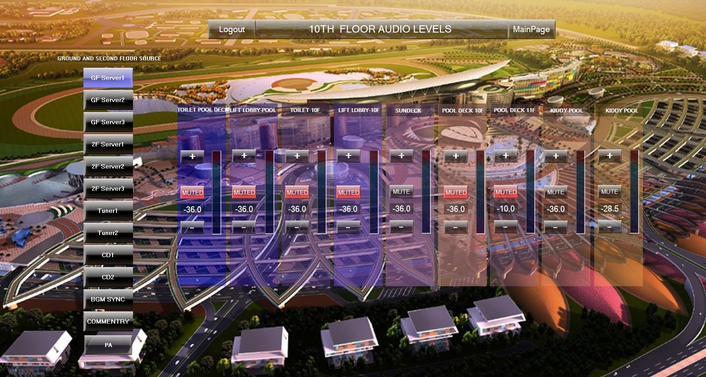 Almoe’s decision to use the Electro-Voice product line for this prestigious project was made in conjunction with Sanjay Kumar, Jonathan Tulip and Mediatech. A cooperation that proved highly effective. Zahid Abbas comments “Three months after the installation, we are extremely satisfied with the sound system. Again, Electro-Voice proved to be the right choice.” Since its opening the Meydan Racecourse has already established itself as a venue for events of major international importance.

About The Bosch Group

The Bosch Group is a leading global supplier of technology and services. In the areas ofautomotive and industrial technology, consumer goods, and building technology, some275,000 associates generated sales of 38.2 billion Euros in fiscal 2009. The Bosch Groupcomprises Robert Bosch GmbH and its more than 300 subsidiaries and regional companiesin over 60 countries. If its sales and service partners are included, then Bosch is representedin roughly 150 countries. This worldwide development, manufacturing, and salesnetwork is the foundation for growth. Each year, Bosch spends more than 3.5 billion eurosfor research and development, and applies for some 3,800 patents worldwide. With all itsproducts and services, Bosch enhances the quality of life by providing solutions which areboth innovative and beneficial.
The company was set up in Stuttgart in 1886 by Robert Bosch (1861–1942) as “Workshopfor Precision Mechanics and Electrical Engineering.” The special ownership structure ofRobert Bosch GmbH guarantees the entrepreneurial freedom of the Bosch Group, making itpossible for the company to plan over the long term and to undertake significant up-frontinvestments in the safeguarding of its future. Ninety-two percent of the share capital ofRobert Bosch GmbH is held by Robert Bosch Stiftung GmbH, a charitable foundation. Themajority of voting rights are held by Robert Bosch Industrietreuhand KG, an industrial trust.The entrepreneurial ownership functions are carried out by the trust. The remaining sharesare held by the Bosch family and by Robert Bosch GmbH.