220,000 Spectators at DATEV Challenge Roth with DYNACORD and Electro-Voice 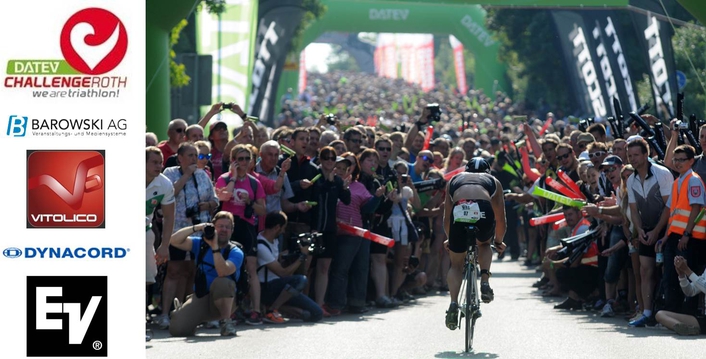 Over 3,000 solo competitors and 600 relay squads took part in a triathlon watched by a record 220,000 spectators
The DATEV Challenge Roth is Bavaria’s biggest sporting event. Over 3,000 solo competitors and around 600 relay squads this year confronted the daunting challenges of the triathlon: a 3.8 km swim in the Main-Danube canal and a 180 km cycle ride followed by a 42.195 km marathon. Dirk Bockel of Luxemburg, who won the men’s race, completed the course in 7 hours 52 minutes, whilst Caroline Steffen of Switzerland bested her female rivals with a time of 8 hours and 40 minutes. This year’s record attendance, 220,000 spectators, underlined once again the popularity of this extreme sporting event.

The excitement of a triathlon can only be sustained if spectators are kept informed throughout the race of intermediate times and standings. For this reason, the quality of the sound reinforcement is of vital importance and the level of intelligibility delivered has to be extremely high. Given, too, the vast area to be covered at an event on the scale of the DATEV Challenge Roth, a vast array of equipment is invariably required. All in all, it was a Herculean task that confronted Barowski AG, commissioned this year for the fifth time by the Roth-based events agency VITOLICO, on 14-15 July; and, as in previous years, the Barowski team chose to rely on equipment from DYNACORD and Electro-Voice.

“The accumulated experience of the previous years was naturally an advantage,” recalls MD Michael Barowski. “After all, you learn something new every year, even though it may be something trivial. I think we did succeed, nonetheless, in making minor improvements this year, and the coverage and intelligibility, as we have heard from various quarters, were of superlative quality.” In addition to the familiar audio challenges posed, for example, by the start of the swimming leg and Solar Hill, there was a new one in 2013: the recently completed Finish Line stadium in Roth’s Triathlon Park, in which some 5,000 spectators gave the athletes a thunderous reception at the end of the race. Here, the tension of a major sporting event gave way at times to a more relaxed party atmosphere. “What this meant for us,” explains Barowski, “is that the sound reinforcement solution had to be capable of delivering both powerful music reproduction and a high level of intelligibility – after all, no one wanted to miss a word of the rather droll commentary delivered by presenters Tobias Ködel and Till Schenk.” To meet the challenge, Barowski deployed an Electro-Voice Xi system comprising six Xi-2123/106F, four Xi-1122A85 and four ZX5 enclosures combined with ten Xi-1191 subwoofers.

Electro-Voice systems also set the tone at the start of the swimming stage (15 x XLC127DVX, 12 x XLE181, 4 x PX1122, 2 x N8000) as well as the cycling stage on Solar Hill; these were complemented in the former case by six V17 enclosures from DYNACORD. “To cover the cycling stage, we used once again a 70-ton, lorry-mounted crane that offered us a perfect suspension point at a height of 18 metres,” says Barowski, who hails from nearby Nuremberg. The hang in question was made up of Electro-Voice XLD components, the entire solution in place on Solar Hill consisting of eight XLD291 and eight XLD281 line-array elements, two Dx46 and two Dx38 loudspeaker processors and two DYNACORD XA delay lines driven by eight Electro-Voice CP3000S and two Electro-Voice CP4000S amplifiers plus one DYNACORD XA system amp. 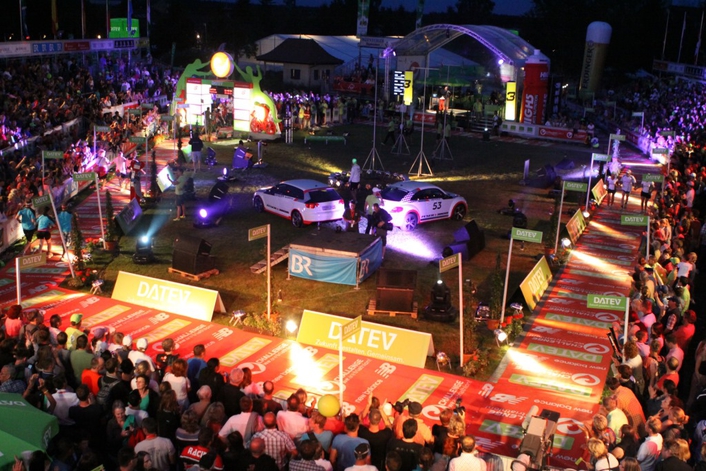 The performance by the Bayern 3 band before the start of the race on the Friday was reinforced by a DYNACORD Cobra system. The setup in this case included four Cobra FAR, four Cobra TOP and twelve Cobra PWH cabinets governed by two N8000 controllers. The requisite power for the band of the Bavarian broadcaster was provided by ten Electro-Voice CP3000S amplifiers

“For a sporting event like the DATEV Challenge Roth to deliver real excitement to its spectators, the audio performance has to be right,” comments VITOLICO MD Thomas Büttner. “This year, once again, it was: the team from Barowski AG did a first-class job using first-class equipment!”