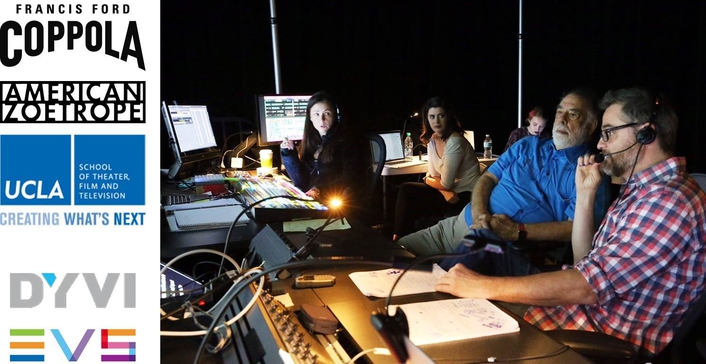 EVS’ DYVI switcher has been chosen by renowned Hollywood film director Francis Ford Coppola for use on his ambitious Live Cinema project, ‘Distant Vision’. The DYVI IT-based switcher, which is usually part of a television broadcast environment, was used to cut together feeds from the 40 cameras, which captured the live production-film hybrid.

‘Distant Vision’ is a traditionally-scripted story that is rehearsed and blocked before being performed live and broadcast in real-time to online audiences. Created by Coppola’s Zoetrope film studio, the first part of the project - which involved the production of a portion of the film’s huge 500-page script - was captured at UCLA.

The DYVI switcher was implemented into the Live Cinema workflow by technical director Teri Rozic. The film’s 17 scenes each had their own complex camera requirements, so each scene’s inputs and sources were pre-set for each one in DYVI, reducing set-up times and simplifying the overall production process. 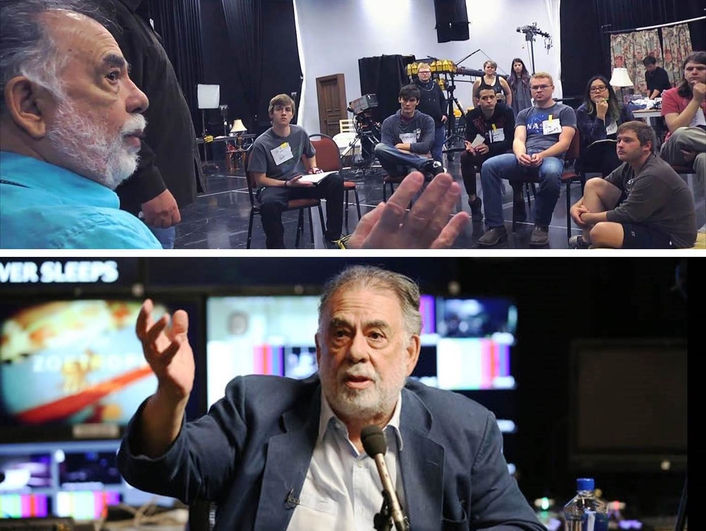 Francis Ford Coppola with students of the UCLA

Discussing the concept, Francis Ford Coppola said: “I felt the need to experiment in order to learn the actual methodology of live cinema, which is a hybrid of theater, film and television. The shot is the basic element, as in film; the live performance is from theater; and the advanced television technology to enable it is borrowed from TV sports.”

As each scene was captured, its pre-set inputs and sources were displayed on one of the three multiviewer screens in UCLA’s control room while the next scene’s set up was displayed on another. These multiviewer scene displays were generated internally by the DYVI system and the live scene was highlighted by a red background – a virtual on-air recording light configured for the Distant Vision production.

This multiviewer installation meant that the traditional broadcast setup - having all available cameras displayed at once - could be replaced by this more logical, pre-set configuration perfect for the Live Cinema project’s production.

“I think the dynamic multiviewer and control panel assignment are the two most important elements from the point of view of the director,” Francis Ford Coppola said of the implementation of DYVI in the project. “In the system our displayed sources could be dynamically rearranged at any time during the production. This allowed me to focus only on the sources needed at a certain point of the production and enabled faster and more direct switching for our technical director. The way we could set up and use DYVI would have been impossible on a conventional board.”

“The way in which this project utilized the DYVI switcher is exactly how we saw it being used when we first developed the technology,” said Jürgen Obstfelder, EVS’ senior product specialist and the software designer of the DYVI switcher. “Over the past few years, the focus with switchers has mainly been finding ways to add more inputs. The way we designed DYVI with IT software means it can be configured for an unlimited amount of setups – or in this case, scenes. Operators or technical directors can then change between those scene configurations with a simple press of a button without needing to implement a shift-key function to access the production’s inputs.”

UCLA Students on the DYVI Live Swither during "Distant Vision"

“The way we were able to configure the DYVI system was unlike any analogue switcher and gave us the ability to easily produce this section of Distant Vision,” said Teri Rozic. “The flexibility that DYVI gave us in being able to preconfigure each scene’s camera inputs and sources made the entire production much more efficient and more easily manageable.” 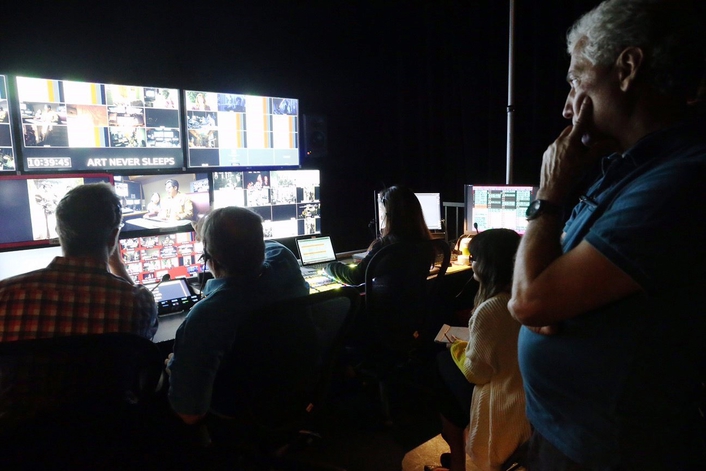 Live Cinema is undoubtedly an ambitious project. Headed by one of the most revered names in film, delivering the excitement of live theater and supported by technology that powers the world’s biggest broadcast events, Distant Vision is an entirely new kind of filmmaking.

“I want to thank EVS for their great help during this experimental production and for their unbeatable tradition of precision and reliability,” concluded Francis Ford Coppola.