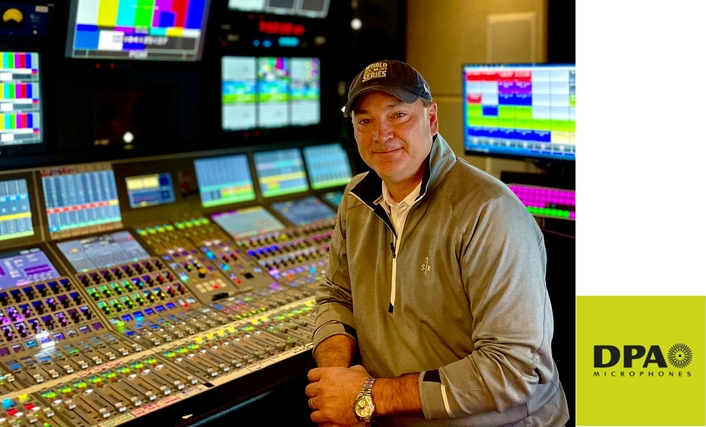 It’s no question that when it comes to live sports broadcasts, audio plays a huge role in translating all action back to fans. This is true now more so than ever as many continue to choose to watch from home rather than attending live events amid the pandemic. In addition to being able to pick up sounds with the utmost clarity and intelligibility, the right microphone needs to be durable, flexible and discreet to keep up with the action. As such, many sports audio professionals continually rely on DPA Microphones to meet their needs.

Among them is Emmy Award-winning Audio Mixer Joe Carpenter, who has been working in the sports broadcast business for nearly three decades. Throughout those years, Carpenter has regularly chosen DPA’s 4061 Omnidirectional mics for years. A staple in the sports world, Carpenter can be found working for major networks, providing audio for professional football games and PGA golf tournaments. He is most frequently spotted in the world of MLB baseball, working on high-profile events like the 20th Anniversary of 9/11 Subway Series tribute game played at Citi Field in New York and the 2021 World Series in Atlanta and Houston.

“I use the DPA 4061 in the parabolic dishes behind home plate for pro baseball games, and they’re awesome,” says Carpenter. “I’ve tried every type of element and microphone in that setup, and I have found that the DPA 4061 is the absolute best.”

Carpenter explains that when miking a professional baseball game, there’s so much going on, mics sometimes take away frequencies. However, with the DPA 4061s, he’s found quite the opposite to be true. “These mics actually enhance the frequencies that I want, and they’ve got really good response,” he says. “It’s very natural sounding and makes for a very organic transition from the parabolic dish to the sound of the crowd roaring, or something similar. These mics have become the base of my setup, I build my entire surround sound around them.”

Carpenter also explains that baseball is the only sport where, save for the baselines and the pitching mound, the dimensions of the stadium and the resulting acoustic environment are completely different. “One day, I might work in a stadium with a closed roof, and other in one that’s open,” he adds. “I find that I can also rely on those DPA mics in the parabolic dishes to provide the best sonic qualities. My distance from the sound source, the source itself, and the actual position and height and angle might change a little bit, but I always know that I can turn to my DPA 4061 as my starting point.”

ABOUT DPA MICROPHONES:
DPA Microphones is the leading Danish Professional Audio manufacturer of high-quality condenser microphone solutions for professional applications. DPA’s ultimate goal is to always provide its customers with the absolute finest possible microphone solutions for all its markets, which include live sound, film, installation, recording, worship, theatre, broadcast, and more. The company does not compromise on its manufacturing, which is done within very tight tolerances and strict testing at the DPA factory in Denmark. As a result, DPA’s products are globally praised for their exceptional clarity and transparency; unparalleled specifications; supreme durability and reliability; and, above all, pure, uncolored and undistorted sound.