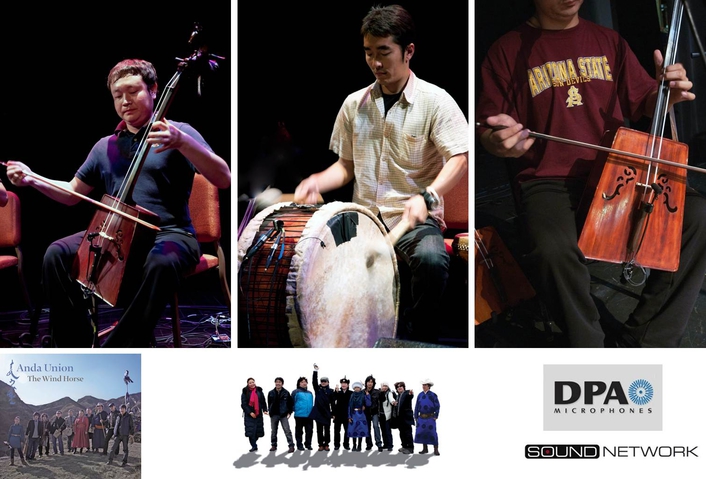 The perfect solution is the DPA 4099C instrument clip mic
Mongolian band AnDa Union are using DPA microphones on their current world tour to provide a powerful live sound for a large and wonderful variety of acoustic instruments. The band, who hail from Hohhot in China, formed in a mission to discover and perpetuate their Mongolian musical heritage, and have been performing worldwide for the past eight years. The mics were supplied by DPA’s UK distributor, Sound Network.

“The main instrument I needed microphones for is the horse head fiddle, which is like a smaller, two-stringed version of the cello,” explains the band’s engineer, Tim Pearce. “One of the main problems I had using a mic on a stand is that they are so energetic it was impossible to keep them close to the mic. With up to eight of these playing at any one time, that is a lot of open condenser mics picking up a lot of ambient sound.

“The perfect solution was the DPA 4099C instrument clip mic, which I attach using the cello mount on the strings below the bridge. The mics sound excellent live, and by keeping them away from the openings to the sound box and close to the strings I avoid feedback problems and get an excellent level as well as sound. I use the same set up on an ancient instrument called the Ikil - a forerunner of the modern horse head fiddle - with excellent results.”

Pearce also used DPAs to mic the two drums that the drummer alternates between. “This posed the problem of repositioning mics each time he moved them, and the mics and stands getting in the way when he tried to switch,” continues Pearce. “The solution was to use the DPA 4061 miniature omnis mounted on the edge of the drum skin on both drums. I am sure I’m not the first person to be literally blown away by the response of this mic. One of the drums is a small kettledrum. The other - a double-sided bass drum similar to a marching drum - was hand made by the drummer using sheepskins from his fathers sheep herd. I need to mic each side of the drum to get the full sound, and this is then panned left and right to give a great stereo image.

“I have encouraged the musicians to treat the mikes as part of the instruments, as they have to ensure they are fitted correctly, so set ups just involve giving them a cable and we are good to go!”

AnDa Union is currently in the middle of a two-month US tour performing mostly at major universities. The tour will continue through China, Australia, New Zealand and Europe in 2012.