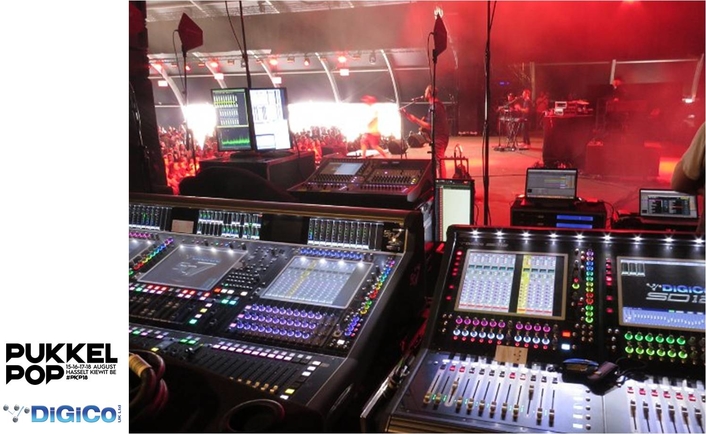 Pukkelpop, held over four days at the end of August, showcases an incredible variety of musical genres, from rock, to pop, to house and metal. It also hosts theatre, street entertainment and food from around the world. A major part of the audio production for this eclectic mixture of entertainment that has elevated Pukkelpop to being Belgium’s biggest and best alternative festival, is handled by production company PRG. DiGiCo was its choice of console for three of the festival’s stages including the Main stage, which hosted some of music’s biggest acts, including Dua Lipa, N.E.R.D, Arcade Fire and Kendrick Lamar.

The DiGiCo line up was SD10s on the Main and Marquee stages at both Front of House and monitor positions, and SD7s at both spots in the Dance Hall. Most bands took advantage of the house consoles, but if they did not, it was because they had brought their own DiGiCos with them. 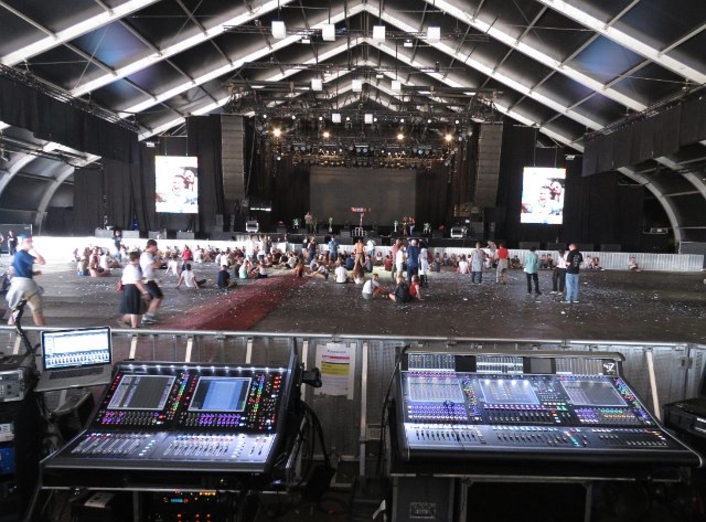 “In the first two days of the festival, we saw eight SD12 brought in as guest consoles,” says DiGiCo’s Jaap Pronk who, along with the company’s Mark Saunders, was on site for the duration of the festival to provide the engineers with support. “One of these was Frank Voet, who came to Pukkelpop straight from the Lowlands festival. He mixed Warhola on the Marquee stage, then moved to Main stage where he mixed Oscar and the Wolf, which sounded fabulous. The following day he also mixed Bazart. All of this was made easy through his pre-programming of the console.” 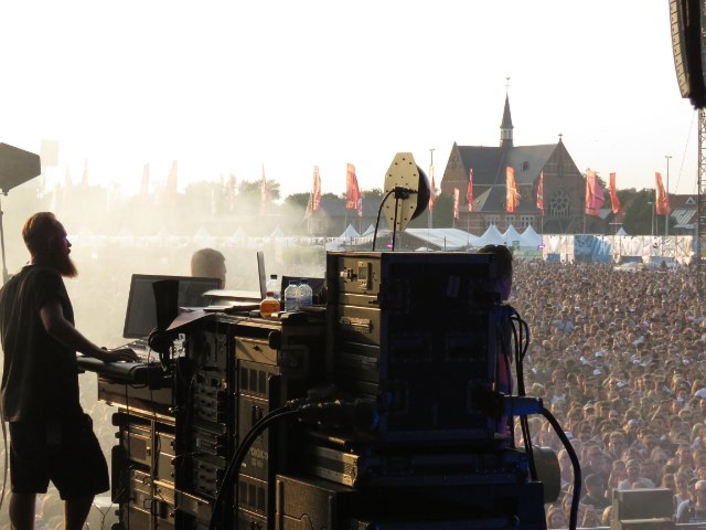 PRG’s Patrick Demoustier was in charge of the engineers’ prep room, which housed both an SD7 and SD10, where he and Jaap ran PCs with offline software and session converters.

“In this way we could easily convert a session from any SD file to an SD10 or SD7 and implement all the festival settings in the consoles,” explains Jaap. “For those engineers that didn’t have pre-prepared session files, there were standard festival sessions already loaded as templates on the consoles, so the guest engineers only had to implement their track lists. If needed Patrick, the crew from our Belgium distributor Amptec or I could give them ‘speed training’ on the fly.” 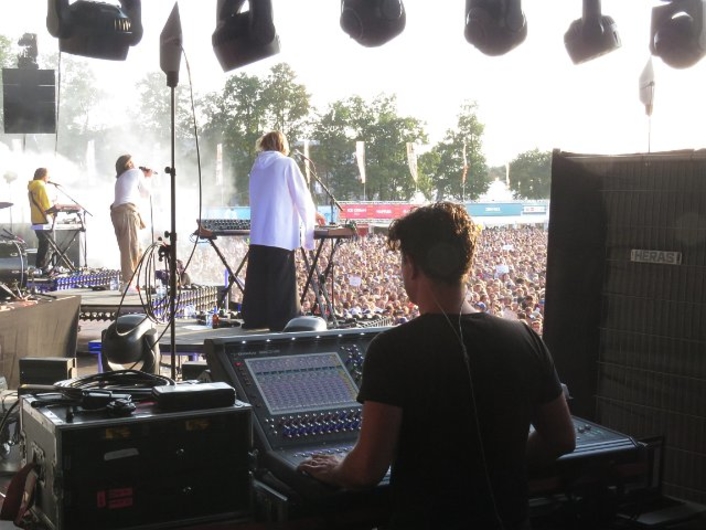 With a session ready, the files were uploaded to a festival Dropbox. All FOH and monitor positions were continuously online, so before the guest engineer reached the stage, the file was loaded and working on the console. 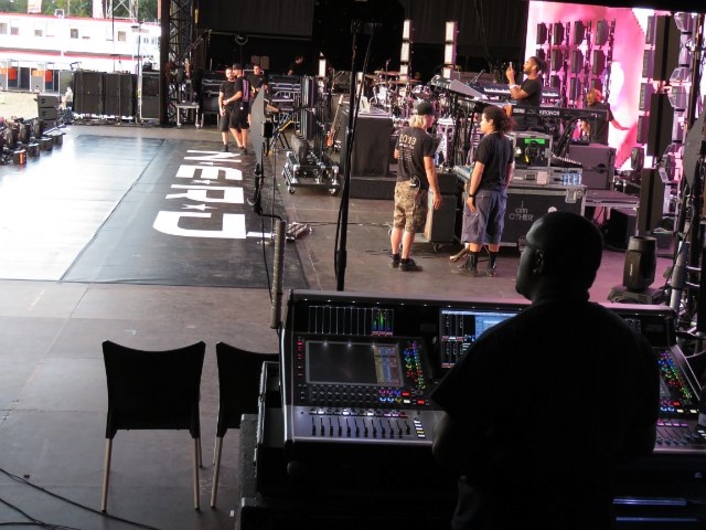 Running in parallel with Pukkelpop was the Lowlands festival in the Netherlands. DiGiCo’s Dutch distributor, Ampco Flashlight Rentals & Sales provided Lowlands with an equivalent DiGiCo prep room, which was in direct contact with the Pukkelpop prep room. With many of the acts playing both festivals, having access to both Dropboxes meant that files were already on site and converted before the acts reached one or other festival. 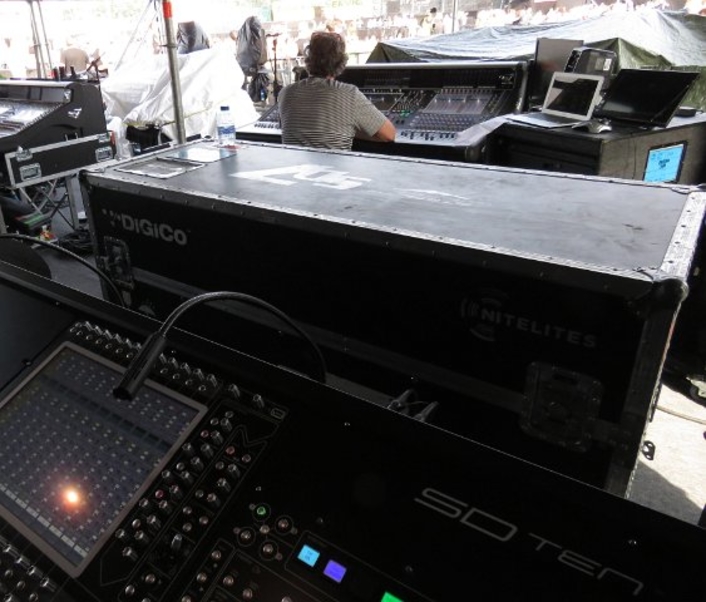 “Having this facility made life much easier for me,” says Andy Egerton, monitor engineer for The Wombats. “I converted my SD5 session from Lowlands to the SD10 for Pukklepop and having the DiGiCo prep room allowed me to check my file through on the console with the support team whilst applying the festival patch. They even gave me some rack conversion and multichannel preset training whilst I was there. This made the change over a breeze when I loaded my file as the racks and patch were perfectly configured. What a service!”

DiGiCo also used the prep room to demonstrate Quantum 7, which gave engineers a chance to experience the new SD7 engine. 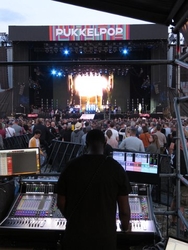 “When I’m mixing IEMs, a lot of the time I have to double up on channels, especially on vocals and brass sections,” says Duncan Wild, monitor engineer for Jess Glynne, following his Quantum 7 session. “This is because you need to give each band member their original dynamics and other band members may want them, too, but a compressed version. With Quantum 7, you don’t have to double up on channels when there are special requests for colour and dynamics in a particular part of the mix.”

“All the guest engineers were happy using the prep room, even if they’d never used a DiGiCo before,” says Jaap. “We were very lucky to have Patrick Demoustier with us. He has a long-term relationship with DiGiCo, having used the consoles since the very beginnings of the company.” 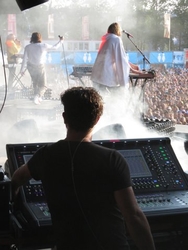 “Back in 2002, I made the step with EML to choose DiGiCo, I was convinced that one day the brand would become a world standard,” smiles Patrick. “I was right!”

4Ears and Mono get closer to the audience with DiGiCo
A decade of DiGiCo for Sound Stylists
AudioCP Invests in Adlib, L-Acoustics & DiGiCo