Dutch Rock band Di-Rect from The Hague celebrated their 15th anniversary in great style with a special concert on the beach at Scheveningen in front of 12,500 enthusiastic fans. The beach is one of the most visited public spaces in the Netherlands and is renowned its vibrant ambience.

Lighting designer Nick van Balen ensured that the spectacular lightshow fitted the sense of achievement after 15 years at the sharp end of the music business, and as a confirmed Robe advocate, included 99 x Robe fixtures on his rig – 46 x LEDWash 300s, 44 x Pointes and nine PATT 2013s – a fabulous looking vintage style fixture designed by Tim Routledge, and now being manufactured by Robe. 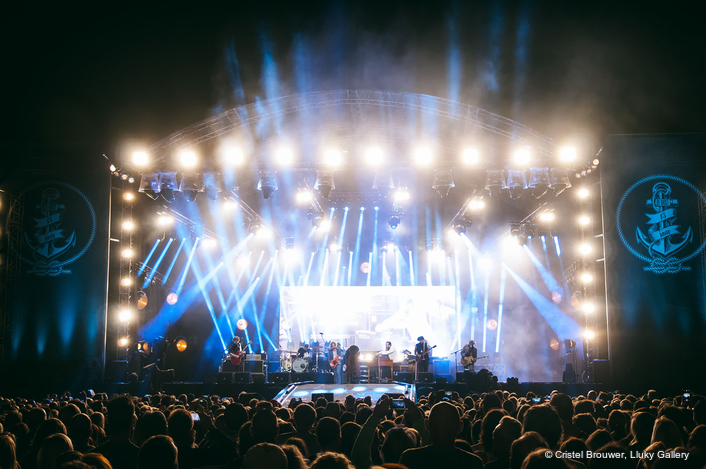 Nick had an open brief for the show, and the main objective was to make it look awesome – which of course he did with a good deal of finesse, attention to detail and some magic touches to ensure that a great night out would be etched into people’s memories!

The gig was originally planned to be staged in a park in the city, but with brisk ticket sales, it was soon moved to a bigger venue. The new environment – with the possibility of wind, wet, sand and a generally salty atmosphere - impacted on which kit was chosen and how it was used.

Nick started with the music and the personalities of the band – knowing what they like in terms of colours and effects ... and also the fabulous site-specific location. “Working somewhere like this always makes things that much more interesting and exciting” he observed.

Installed in the stage roof were six trussing fingers, each of which was rigged with four Robe Pointes, three LEDWash 300s and three other moving lights, three strobes, three 2-lite blinders and two Spectral Zoom PARs as ‘spook’ light at the end of each finger. 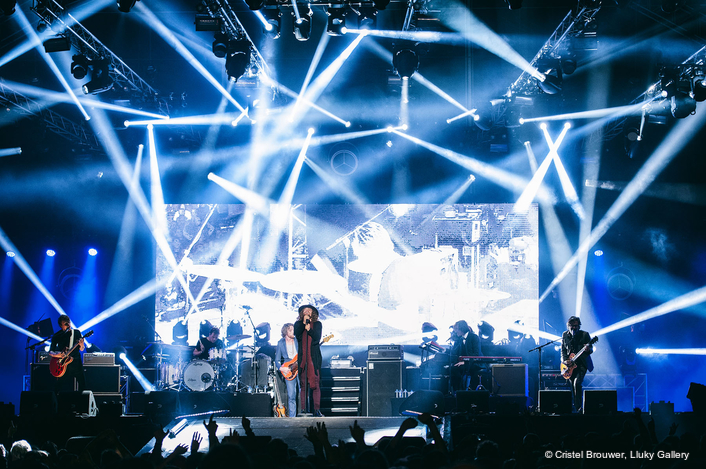 The floor package comprised 16 x Pointes, more strobes and 2-lites plus six other movers, and the set also featured a catwalk with a 2 x 2 metre Plexiglas element, under which was another four LEDWash 300s and a moving light.

For side lighting, he used 18 x LEDWash 300s and eight of the nine PATT 2013s, with the ninth one positioned rear-centre above the upstage LED wall.

The 44 x Pointes – a fixture that Nick has used extensively this year – were mounted in groups of 4 to create ACL looks, resulting in 6 of these classic geometric fan shapes in the roof, one on each finger truss, one mid-stage and four on the floor. “The huge output of this small fixture is amazing. It’s really fast and gives a great look when combined in multiples”. He tends not to use gobos when they are in a set up like this as he feels it’s a little - pardon the pun – pointless!!!

The 46 x LEDWash 300s were deployed around the trusses and used to colour the stage and the band, adding extra punch when needed. He loves the zoom and the colour mixing, and the fixtures were perfect for this design.

The biggest challenge in lighting the show was fitting all the kit into the stage space at the angles Nick envisioned. 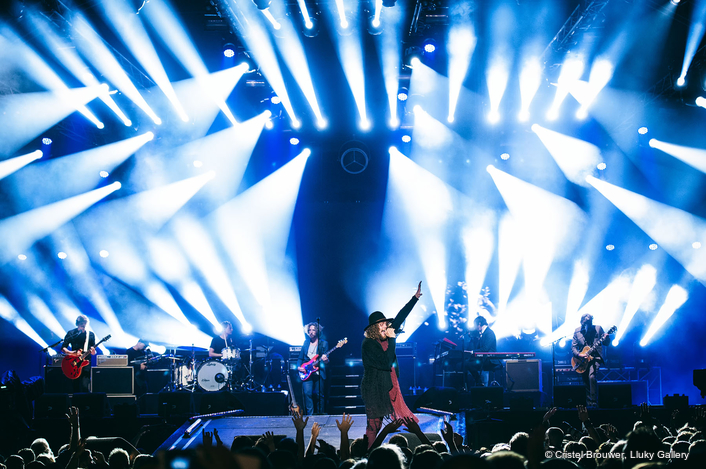 Full production – sound, lighting and video – was all supplied by The Purple Group co-ordinated for them by Pim Elberse, who saw that everything mimicked the original plan as closely as possible.

The biggest creative challenge was adapting to the scenery and bringing new ideas online that would work on the beach as opposed to in the originally proposed park setting.

Video was added relatively late-on in the day, another parameter for which the lighting approach needed some adjustment. Di-Rect’s production manager Elco Laden - also the video programmer / operator for this show - and Nick worked well alongside one another under a lot of time-pressure to integrate and present a coherent lighting and visuals package which WOWed the crowds and gave the show the profile and presence it deserved.

Nick programmed and ran the lightshow using a two Hog 4s with playback wings, with a  Rackhog4 as the main network server, running in line with 3 x DP 8000 USB expanders and 3 x Luminex Gigacore 16RFO Ethernet switchers over 300 metres of fibre. 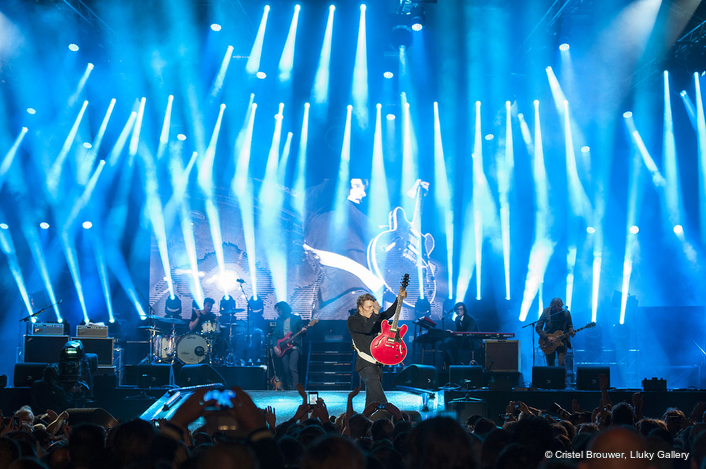 Robe Gets Art of Light Treatment at DanceValley 2014
A State of Trance 650: grandMA2 Discovers New Horizons
Robe Gets Into A State … of Trance