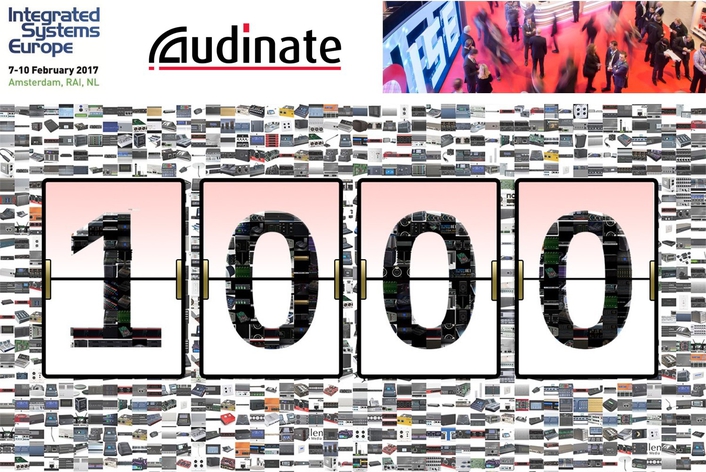 Audinate zooms past Dante product and licensee milestones at ISE2017

Audinate, developer of the industry-leading Dante™ media networking technology, is celebrating key adoption milestones at ISE2017. Over 350 manufacturers have now licensed Dante, an increase of 75 since this time last year. Recent licensees span a broad spectrum of markets, including installed sound, live sound, broadcast, transportation and CEDIA, and include notable brands such as Beyerdynamic, Clear-Com, JBL, Lawo, Panasonic, Riedel, Sony and many more.

“The continued adoption of Dante by AV manufacturers such as these shows that Dante truly has become the market leader in audio networking,” stated Lee Ellison, CEO of Audinate. “Manufacturers are responding to market demand and recognizing that they need to offer Dante to remain competitive.”

In addition, the company has announced that there are now over 1,000 different commercially available products on the market, including interface cards, that have integrated Dante. This represents a nearly 50% increase from ISE 2016.

Audinate will have many of these Dante-enabled products on display in their stand at ISE2017. Show attendees are encouraged to visit Audinate at stand #7-E190

Based on industry standards, Audinate created Dante, an uncompressed, multichannel digital media networking technology, with near-zero latency and synchronization. Dante is the preferred audio networking solution that has been adopted by more pro-audio AV manufacturers than any other networking technology. Interoperability is not a dream of the future, but a reality today. Over 1,000 Dante-enabled products are available from the world’s leading manufacturers, enabling you to mix devices from multiple manufacturers.

Audinate was founded with a vision to revolutionize professional and commercial audio for the 21st century. Audinate’s award winning Dante audio over IP networking solution is the worldwide leader and used extensively in the professional live sound, commercial installation, broadcast, public address, and recording industries.  Dante replaces traditional analogue audio cables by transmitting perfectly synchronized audio signals across large distances, to multiple locations at once, using nothing more than an Ethernet cable. Audinate is headquartered in Australia and has regional offices in the United States, United Kingdom and Hong Kong. Dante technology powers products available from hundreds of leading audio partners around the world.