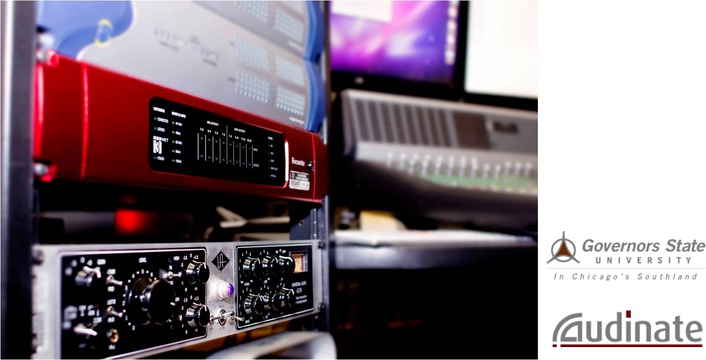 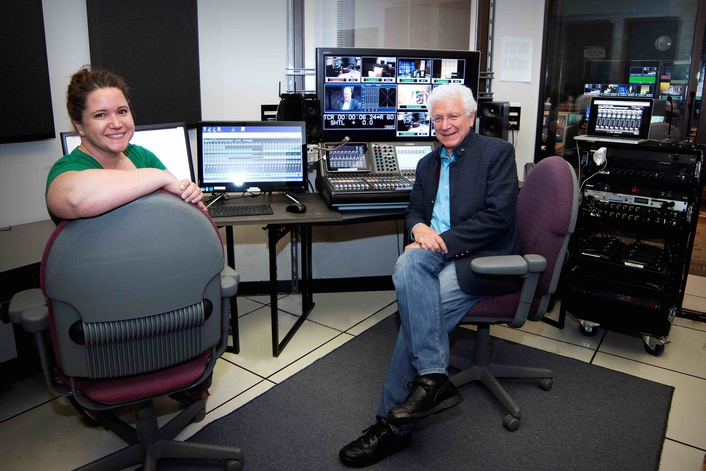 “We had a fairly traditional broadcast infrastructure with a house video router that also supported multiple layers of analog and AES audio,” said Charles Nolley, vice president of media marketing and communications at GSU. “We were faced with the growing complexities of accommodating more multichannel audio in our video productions. It became increasingly difficult to route multiple levels of audio through a traditional routing infrastructure, and the challenges of managing audio from remote production locations across campus were cumbersome and time-consuming.”

Nolley had long been monitoring audio networking systems, but found most to be complex, finicky and hampered by latency issues. Dante proved the only viable choice for his goal of attaining flexibility, scalability, ease of use and exceptional audio quality across multiple points. Nolley adds that “the cost savings of transitioning to Dante were even bigger than imagined,” noting that a legacy audio routing upgrade would have taken one year given his limited staff resources on campus. The Dante network installation was completed in a week and much of that was spent removing unneeded point-to-point analog infrastructure.

“We can now tie intercom, talkback and IFB together from all these systems together for communications between the TV studio and performance arts center,” said Nolley. “Dante has all these systems talking to each other, and it gives us incredible flexibility in configuring channels. Dante’s signal quality has also cleaned up a lot of the artifacts moving between our intercoms and cameras.” 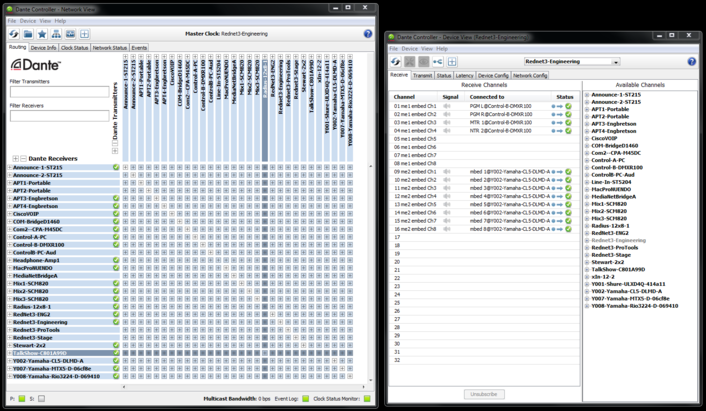 Nolley and his small staff have also found new freedom in mixing theater performances. Connecting to a Yamaha CL5 and Shure ULXD systems in the theater, operators can now also pull live sources directly from the mic preamps to the CL5 in the TV studio to create their own mixes for cable TV broadcasts, as opposed to being forced to use the house mix as well as creating synced multi-track recordings for remixing in post. Focusite RedNet 3 interface devices provide full Dante connectivity to a Sony digital console in Control B, 32 channels of I/O to a separate ProTools audio suite, and Dante I/O to multiple HD video recorders and server channels. For live sports broadcasting, Dante enabled announcer’s consoles from Studio Technologies integrate all on-air, talkback, cue audio signal routing and power through a single Ethernet cable.

Dante has found its way into some additional campus environments since the initial broadcast and production-based deployment. Nolley worked closely with architects and system designers in the renovation of the main campus meeting hall resulting in a sophisticated surround sound system with Dante based Symetrix DSPs that integrate an additional 64 channels into the campus Dante network.  The room is also fitted with ceiling mounted Shure Microflex wireless transceivers, which connect directly to the Dante network, making it easy to configure any combination of wireless microphones in the room.

The staff also assembled a portable Dante-centric audio conferencing system using Shure Microflex wireless systems and SCM-820 mixers. While the system can be moved between classrooms and other campus locations, the network allows us to flexibly assign wireless channels and automixers to multiple rooms simultaneously with control from a central location or in the room from a laptop as needed.

The power and flexibility of Dante encouraged GSU to implement a separate Dante network exclusively for use in new nursing labs in its College of Health and Human Services, where professors can monitor multiple nurse/patient interactions remotely and communicate privately with either via wireless in-ear monitors. 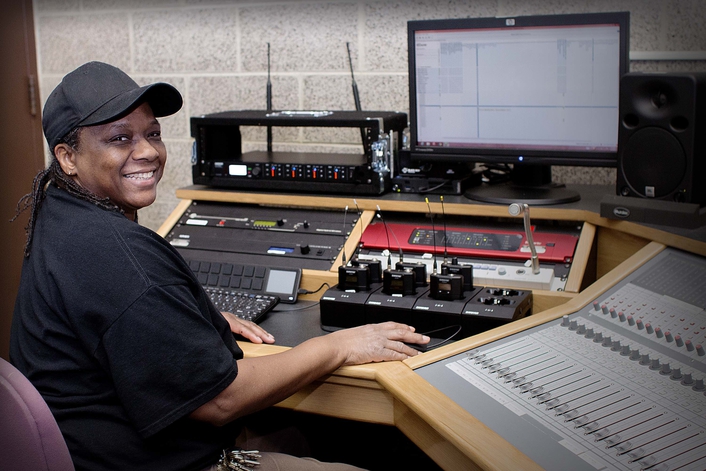 “With Dante, the audio is always clean, and we never have to worry about maintaining tight sync across the network for broadcast applications that demand low latency,” said Nolley. “However, scalability is where Dante has really exceeded expectations. We originally just looked at digital audio networking to improve our studio infrastructure, but the longer we have had Dante, the more we have realized we can do so much more with the technology. We did not envision extending our intercom and IFB systems for theater and learning applications. And it’s so easy to use that we now have students configuring and running setups across campus by themselves. It has enriched the education of our students enormously, because they are now very empowered to quickly understand how to use this technology across many applications. That simply was not possible before.”

About Audinate
Audinate was founded with a vision to revolutionize professional and commercial audio for the 21st century. Audinate’s award winning Dante audio over IP networking solution is the worldwide leader and used extensively in the professional live sound, commercial installation, broadcast, public address, and recording industries.  Dante replaces traditional analogue audio cables by transmitting perfectly synchronized audio signals across large distances, to multiple locations at once, using nothing more than an Ethernet cable. Audinate is headquartered in Australia and has regional offices in the United States, United Kingdom and Hong Kong. Dante technology powers products available from hundreds of leading audio partners around the world.